Catching Up With Some Favorites 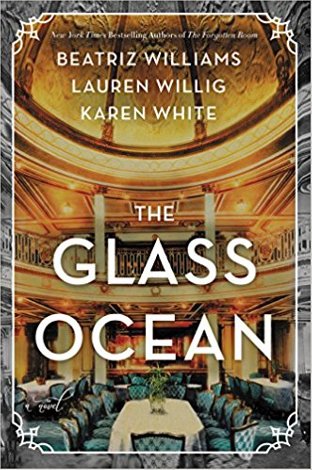 So I’m back from NYC and the glory of books and the book world known as BEA/BookCon.

While I was there, I took advantage of being surrounded by authors and stole some time with some of my favorites and did some video interviews. I’ll be launching them later this year when I’ve had the time to edit and polish them, but I thought I’d take a second to at least let you know about their upcoming books.

You can’t have been following me for long without knowing how much I love Beatriz Williams, Lauren Willig and Karen White! Karen wasn’t in New York last week, but Lauren lives there and Beatriz did a few signings, so I was able to catch up with them for a few minutes in the Javitz Center.

Releasing in early July, Williams continues her loosely connected Schuyler series with Summer Wives, which received a starred review (here), that sums it up like this: Twenty years after a murder at her family’s tony Long Island Sound summer enclave, an expatriate actress returns to right a terrible injustice and heal her broken heart.

Karen White released her most recent title this week, with Dreams of Falling:

On the banks of the North Santee River stands a moss-draped oak that was once entrusted with the dreams of three young girls. Into the tree's trunk, they placed their greatest hopes, written on ribbons, for safekeeping--including the most important one: Friends forever, come what may.

But life can waylay the best of intentions….

And after just over two years, the three authors (collectively known as The Ws) will release their second co-written book, The Glass Ocean, in early September.

From the New York Times bestselling authors of The Forgotten Room comes a captivating historical mystery, infused with romance, that links the lives of three women across a century—two deep in the past, one in the present—to the doomed passenger liner, RMS Lusitania.

(I was staying with a dear friend in NYC who came across a cocktail named after the great ship, and I *may* have snuck a thermos full of the drink into the Javitz Center to share with Lauren and Beatriz during our interview, and to toast their very successful careers. I’ll include a link to the recipe at the end of this post.*)

I also caught up with Susanna Kearsely, whose next title, Bellewether, releases early August. Kearsley, who’s Canadian, shared how fascinating it was to do research into a piece of history her own family had experienced in the 18th century, before the American Revolution, and how those family legends had turned into a book about a billeted prisoner of war.

"The house, when I first saw it, seemed intent on guarding what it knew; but we all learned, by the end of it, that secrets aren't such easy things to keep."

It's late summer, war is raging, and families are torn apart by divided loyalties and deadly secrets. In this complex and dangerous time, a young French Canadian lieutenant is captured and billeted with a Long Island family, an unwilling and unwelcome guest. As he begins to pitch in with the never-ending household tasks and farm chores, Jean-Philippe de Sabran finds himself drawn to the daughter of the house. Slowly, Lydia Wilde comes to lean on Jean-Philippe, true soldier and gentleman, until their lives become inextricably intertwined. Legend has it that the forbidden love between Jean-Philippe and Lydia ended tragically, but centuries later, the clues they left behind slowly unveil the true story.

Part history, part romance, and all kinds of magic, Susanna Kearsley's latest masterpiece will draw you in and never let you go, even long after you've closed the last page.

And finally I had the chance to meet up with the lovely Sarah Morgan, who will be stepping into women’s fiction this year with the Martha’s Vineyard set How to Keep a Secret, which releases in July.

Three generations of women are brought together by crisis, and learn over the course of one hot summer the power of family to support, nourish and surprise.

When life changes in an instant, and Lauren, Mack, Jenna and Nancy are thrown together for a summer on Martha’s Vineyard, somehow, these very different women must relearn how to be a family. And while unraveling their secrets might be their biggest challege, the rewards could be infinite…

Heartwarming and fresh, Sarah Morgan’s brilliant new novel is a witty and deeply uplifting look at the power of a family of women.

Sarah also has a holiday book again this year, The Christmas Sisters, another family saga that looks delightful (and releases in September).

The McBride sisters all have different reasons for finding the holiday season challenging, but their adoptive mother is determined this year will be different. As the countdown to Christmas Day begins, arguments, connections and secrets start bubbling. The McBride family was made, not born—but will they be able to make this the magical family Christmas their mother has always dreamed of?

I’ll be waiting on tenterhooks for all of these great novels. What about you? What favorite authors are you looking forward to reading this summer?

*And as promised, here is a quick link to a short history of the Lusitania, and a cocktail recipe named after the ship before it was sunk by a German U-Boat.

(We tried it both with this recipe, and with the slight variation of Grand Marnier in place of the brandy, which we liked better. Cheers!)