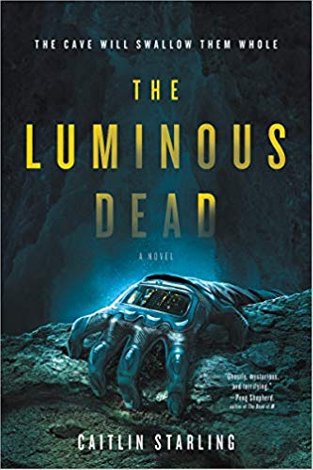 Is caving the new shiny thing in speculative fiction? Three books—a novel and two novellas—I read recently are Science Fiction thrillers featuring caving. Heck, it truly works as a horror hook for me, as I can’t imagine anything scarier than spelunking in the dark, pretty much alone and in an inhospitable environment, be said environment another planet, an artefact from another civilization or an outworld prison.

In The Luminous Dead by Caitlin Starling (published last April), a young, inexperienced caver takes on a very very well paid job in a new, unexplored cave system on a different planet. Gyre is given an awesome high-tech suit, a mission brief and… not much else. The first alarm bell rings when she understands that there isn’t a whole support team on the surface but just the mission leader, Em. While she continues with the mission, Gyre slowly starts to realise that the mission is not so straightforward, Em may be lying to her, the cave is not so safe, and there are things in the dark.

Walking to Aldebaran is a new novella by Adrian Tchaikovsky (out on May 28) that speaks of a dream. Gary Rendell always wanted to be an astronaut. And Gary is super, super lucky, because he made it. A probe is sent to explore a strange (possibly alien) artefact in the outskirts of the galaxy (the trip of a lifetime! Literally!) and Gary is part of the mission. But Things Go Wrong (as per usual) when a new mission is sent down to the artefact and Gary finds himself alone, walking and walking and walking those dark entrails. And as you probably guessed it, there are things in the dark.

Meanwhile, the novella Her Silhouette, Drawn in Water by Vylar Kaftan (out this week) is a thing of beauty. I really enjoyed the two aforementioned works but this one I love. Bee is a queer latinx who together with her lover, Chela, is trapped in the hell-ish caverns of a prison planet Colel-Cab that has been created specifically for people like them: murderous telepaths. But Bee doesn’t remember what she has done, or why. She doesn’t even know how long it has been that they are have been there. She only knows she loves Chela and that Chela is always looking out for her. But then someone from the outside manages to reach out to Bee, and she realises the only thing in the dark is her.

These three stories have more in common than caving and their genre: they also feature highly unreliable narrators, which is catnip to this reader.

In The Luminous Dead, is Gyre truly seeing things in the dark? Is Em lying to her? If yes, why? And how about the romantic relationship that develops between them? Is that a healthy relationship? Could it really be love when someone you are supposed to trust with your life is not so trustworthy after all? Does it matter when it comes to life and death? Like The Descent, in space.

Meanwhile, the light, funny tone of Gary’s narrative in Walking to Aldebaran disguises something deeper, something disquieting. And beyond the joyful excitement of first contact lies something not so good. Could the worse thing in the dark be… Gary himself? What happened between the moment when Gary’s team was killed and now? How much time has truly passed? Is time even linear inside that cavernous place? Before the book ends, Gary will sure tell you. Be ready for a lot of body horror. Like an episode of Twilight Zone, in space.

The unreliability in Her Silhouette, Drawn in Water changes the story multiple times and the least said about it the better. Like The Matrix but I am not going to tell you where or how.

All three books feature characters that enter a cave in a way and get out different. Altered. Changed—sometimes physically yes, but mostly emotionally—by their experiences.

If you like SciFi, horror and unreliable narratives, these are for you.