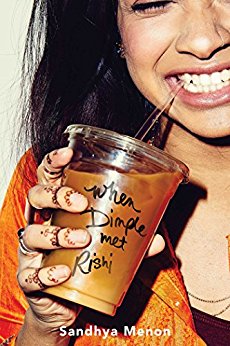 The sun is shining, all of the trees have buds, the garlic in our garden is growing a mile a minute, the birds are making a racket, and both of the cats dragged chipmunks into the house this morning. What does that all add up to? SPRING IS FINALLY HERE FOR REAL.

All of the new growth and WARM DAYS and wildlife activity has me feeling rejuvenated and joyfully mushily delighted, and OBVIOUSLY, I’d like to read some books that complement my mood. Clearly, it’s a perfect time to take a look at a few of the YA romances due out in May!

An opposites-attract romantic comedy about two 18-year-old first generation Indian Americans. Dimple loves coding and wants to start a career before starting a family—she isn’t particularly interested or receptive to her mother’s desire to see her married to an Ideal Indian Husband. Rishi is more of a romantic, and believes in fate, destiny, and in the traditions and history of arranged marriages. Their parents want them to make a match, so what better way to facilitate it than by sending them to the same programming camp?

Menon’s bio says that “she’s on a mission to (gently) coerce her husband and children to watch all 3,220 Bollywood movies she claims as her favorite,” and if I hadn’t already been excited to meet Dimple and Rishi, that line alone would have brought me around. Starred review.

The final book in Han’s trilogy about the romantic trials and tribulations of Lara Jean Song. I love this series as a romance, but I love it even more as a story about family—Kirkus was a little iffy about this last installment, but I wouldn’t miss it for the world.

I Believe in a Thing Called Love, by Maurene Goo

Romantic comedy about Desi Lee, who uses lessons she’s learned from her father’s adored Korean dramas—including, according to the Kirkus review, “Be Caught in an Obviously Lopsided Love Triangle”—in an attempt to win over her crush. It sounds hilariously hijinks-heavy and includes a starter guide to K-drama for readers who are new to the genre and end up eager to dive in. Starred review.

The Lines We Cross, by Randa Abdel-Fattah

Australian import about an Afghani-Australian girl who falls for a white boy whose parents are involved in an Islamophobic anti-immigration group. I admit to a certain amount of squeamishness about the premise—it just seems like it could go horribly awry in so many ways—but between the glowing review and Abdel-Fattah’s previous books, I’m planning to at the very least give it a try. Starred review.

Ramona Leroux has been through a lot of hard things in her life, but happily, coming out about liking girls wasn’t one of them. Now that her childhood best friend has moved back to town, though, they’ve been spending a lot of time together, and she’s finding herself attracted to him. Being attracted to a guy is a first for her, and she’s not sure what that means in terms of her identity. Murphy’s books are a joy because her characterization is always so rich and nuanced—and in books with large ensemble casts, that’s especially impressive. Starred review.

As always, other recommendations are very welcome!