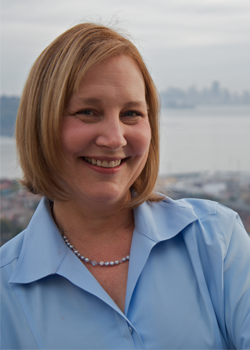 How do you follow up a Newbery-winning novel adored by many children across the country? If you’re Katherine Applegate, you do so with a bit of procrastination, as you’ll read below.

You can also follow it up by giving it the very thing that many people loved about the award-winner—a lot of heart. In Crenshaw, coming to shelves in September, Applegate tells the story of Jackson, a boy whose family has fallen on hard times. There’s little money for food, and they may have to once again move back into the family van. Jackson is also trying to understand how it is that a talking black-and-white kitten in a San Francisco Giants baseball cap, taller than he is and with eyes “the sparkly color of morning grass,” has reappeared in his life. His name is Crenshaw, and no one else can see him. Jackson hasn’t seen him in years—not since the last time his family struggled with homelessness.

Most of all, Jackson wants “to be treated like a grown-up. I want to hear the truth, even if it wasn’t a happy truth.”

I talked to Applegate via email about the new novel and what’s next on her plate.

Can you talk about how this story came to you?

I’ve always wanted to write about a child and his imaginary friend (although I never had one myself): creating the perfect pal is such a creative and charming way for children to navigate the world. And I love the movie Harvey, which stars Jimmy Stewart as a guy whose best friend just happens to be an invisible rabbit.

So, that part—the imaginary friend—was easy. And I knew I wanted to write a book for middle-graders, so I had my target audience in mind. (I adore writing for kids that age.) But then I had to ask how and why an imaginary friend might appear in the life of, say, a typical fifth-grader. Would it be during a time of trauma? What might be going wrong in that child’s life?

Jackson seemed like the perfect protagonist—a no-nonsense kid, who prefers science to magic and facts to fantasy. Pairing him with Crenshaw, a rather unpredictable and extremely large cat, who’s fond of bubble baths and purple jelly beans, made for some interesting moments. Once I had those elements, the rest was easy.

Well, okay, not easy. But easier.

I think this book will do much in helping children from more privileged families understand that homelessness can happen to anyone. I think of Jackson's parents when I see people at interstate exit ramps asking for money, especially if they have an instrument in hand. In your experience as an author who does school visits (which I assume you do), have you worked with children from such families?

I don’t think there are many middle-grade children’s books that talk about the “working poor”—about the stresses that come when parents juggle multiple low-paying jobs and there still isn’t enough food on the table or maybe even a place to call home. Children may not know what being “food insecure” means, but they understand much more than we give them credit for, especially when it comes to money.

One of the lovely benefits of winning the Newbery is that you get to visit schools all over the country. Some are private schools with breathtaking campuses, and some are Title I schools with padlocked, unstaffed libraries. The kids are just the same—kind, idealistic, energetic, engaged—but their circumstances are wildly, heartbreakingly different.

One of my favorite book festivals, the Texas Book Festival, sends children’s writers out to Title I schools for a program called Reading Rock Stars. Every child receives a brand-new autographed book, and the joy on the faces of those children, many of whom have never owned a book of their own, is the reason I write for kids. Visiting schools like those got me thinking about writing for kids like Jackson.

Speaking of that Newbery, is it daunting to release a novel post-award? Or did the award give you a confidence boost? Or a little bit of both?

Is it daunting? Oh, yeah. Are there worse problems to have? Oh, yeah.

A lot of Newbery winners told me the secret was to already have your next book well underway. Excellent advice, but it came too late to do me any good. I’m a gold medalist in procrastination, so it definitely took me a while to get going on Crenshaw, but once I did, the story carried me along.

How did you choose the name Crenshaw?

There may have been a baby-name website involved. Or two or three or 10 (see also: procrastination, above.) I wanted a name that I’d just plain never heard before.

“Think carefully, Dowd. Didn’t you know somebody, sometime, someplace by the name of Harvey? Didn’t you ever know anybody by that name?”

“No, no, not one, Doctor. Maybe that's why I always had such hopes for it.”

I like how you touched on Jackson's shoplifting without turning it into a lecture. Can you talk a little about including that?

Oh, it’s good to hear that’s how it played out for you (and please tell my teens, who seem to think I’m quite accomplished at lecturing). I didn’t want to overstate the point. But Jackson’s such a “good” kid—one adult calls him an “old soul”—that I wanted to show him acting out in a tangible way.

Have you heard from students, by chance, who have read the book? It may be too early to ask that.

Not yet, so I’m really excited to start doing school visits when the book publishes in September. I’m also pleased that Macmillan/Feiwel & Friends are sponsoring a nationwide “Crenshaw Food Drive” (here’s the information) with independent bookstores to help bring awareness to the problem of childhood hunger. It’ll give me a chance to talk to kids about the fact that nearly one in five kids lives in a household that struggles to put food on the table.

I’m at work on the first book in a middle-grade trilogy called Endling, a fantasy about the last member of a doglike species called “Canox.” It’s really been cool. Every day I get up and create another new species.

This gig beats real work, I gotta tell you.