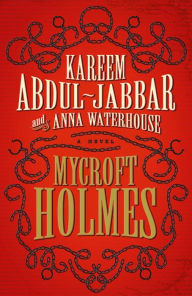 Most people would call themselves lucky if they found one thing in life they liked to do. Sometimes people are fortunate enough to find more than one thing. Take, for instance, the following Hollywood and sports celebrities, who not only find time for their first passion, but also write genre fiction. Between now and the end of the year, you will find their literary aspirations taking physical form at your local bookstore. Here's what you can look forward to....

Did you know that one of the biggest (literally!) names in professional basketball is also a fan of the biggest name in detective mysteries, Sherlock Holmes? Kareem Abdul-Jabbar considers himself a devout Holmes-ian, so much so that he took to writing a book with screenwriter Anna Waterhouse. Mycroft Holmes is a story about the early days of Sherlock Holmes’ older and smarter brother. Having just graduated from Cambridge University, young Mycroft has already established a job in the British government, working for the Secretary of State for War. Mycoft's friend, Douglas, and Douglas' fiancée, Georgiana, both come from Trinidad, where disturbing news emerges: spirits are luring children to their deaths and their bodies are found drained of blood. Concerned, Georgiana travels to Trinidad upon hearing the news. Mycroft convinces Douglas that they, too, should travel to Trinidad to look after Georgiana. But they are invariably drawn into a dark web of deadly secrets that threatens their very lives. If you like adventure, then you may want to check this out. And if you like Sir Arthur Conan Doyle's most famous literary creation, you'll want to see how this early adventure shapes the Mycroft character into the man who founded the famous Diogenes Club.

The Explorers Guild: Volume One: A Passage to Shambhala by Kevin Costner, Jon Baird and Illustrated by Rick Ross

with Wolves, JFK, Field of Dreams, Bull Durham) is already an accomplished filmmaker and actor, and now he applies his storytelling skills to the printed page. In The Explorers Guild: Volume One: A Passage to Shambhala, Costner and Jon Baird return to the golden age of adventure stories. The book is set against the backdrop of World War I, a time when much of the world was still left unexplored and brave souls would venture into the unknown. That is, in fact, the purpose of a secret organization of adventurers called The Explorer's Guild. They seek out the truth behind the world's myths, traveling around the globe as adventure calls. Their first adventure, chronicled here, is about the Guild's quest to find the golden city of Buddhist myth. Their quest takes them around the world, from the Polar North to Mongolian deserts, through the underground canals of Asia, and deep inside the Himalaya mountains. Accompanied by mood-setting illustrations from Rick Ross, this volume is your chance to get in on the ground floor of adventure.

Rules for a Knight by Ethan Hawke

You may know Ethan Hawke through his acting career in films like Dead Poets Society, Reality Bites, Gattaca (one of my favorite sci-fi films), Training Day, and Boyhood, among others. But did you know he was already an accomplished author? He's already written two books, The Hottest State and Ash Wednesday. His latest if the forthcoming Rules for a Knight. The book is written as a series of letters written by a Knight to his children. The Knight fears that he may not return from battle and so he writes the letters to teach them what he can while he's away. His series of ruminations include his thoughts on solitude, humility, forgiveness, honesty, courage, grace, pride, and patience. The Knight bases his knowledge on experience and on the ancient teachings of Eastern and Western philosophy. By writing these letters, he hopes to give his children a moral compass with which to guide them through their own lives and, more importantly, teach them about the things that matter most in life.

A Dream of Ice by Gillian Anderson & Jeff Rovin

Gillian Anderson, star of The X-Files, made her debut literary splash last year with A Vision of Fire, the first book (co-authored with Jeff Rovin) in the paranormal thriller series Earthend Saga. In the first book, child psychologist Caitlin O'Hara investigates the apparent link among strange events happening with children around the world. By the end of the book (spoiler alert!) Caitlin possesses supernatural powers that give her the ability to heal with her mind and see things from other places and times. In Anderson and Rovin's upcoming sequel, A Dream of Ice, Caitlin must learn to deal with her newfound powers. She'll have plenty of opportunity. For starters, an unknown figure is watching her and her son, perhaps hunting them and putting their lives in danger. Also, a field agent for a mysterious research organization is searching for the ruins of an ancient civilization in Antarctica and calls on Caitlin to help. That ancient civilization is suspected of being the link to the weird things going on around the world. This series is certainly shaping up to be something that should be very familiar ground for fans of The X-Files.