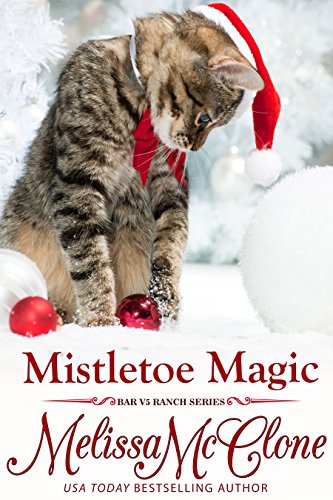 At the end of 2016, I requested a few Christmas titles from a few publishers, and while I was able to enjoy them over the season, it was a little late to write about them during the season.

So I decided to do something a little fun and informative with the authors. For the last two weeks in April, I’ll be highlighting the titles and celebrating the spirit of Christmas in April.

Over the past decade or so, “Christmas in April” has come to represent a volunteer drive and heightened volunteer activity for a number of non-profits, so I thought it would be an interesting opportunity to ask the authors to share their favorite charities and we’d highlight them as part of the post.

First up is Melissa McClone. I read a novella and a short story from Melissa in The Cowboys of Copper Mountain: A Christmas Collection that came out last fall from Tule Publishing. (Special thank yous to Audible and Tule for helping me access the collection in audio!) I really enjoyed all of these titles, which are linked to various series set in Marietta, Montana from the authors and Tule.

(More about the set and Tule next week, when I highlight Jane Porter’s story and charity.)

Melissa’s stories were both sweet and romantic. Short story “Mistletoe Magic” still managed to have a full, satisfying romantic arc for Noah and Caitlin, a couple who had fallen in love years ago in college but lost touch after they broke up. Now a veterinarian in Marietta, Montana, Noah gets a taste of Christmas magic when Caitlin finds a stray kitten and brings her in on Christmas Eve. (And though I love dogs, it’s nice to occasionally see a cat front and center in a romance!)

In novella Home for Christmas, McClone pairs a pastry chef and the owner of a dude ranch, who also happens to be her brother’s boss. After a stunning betrayal in Arizona, Rachel has come to Montana to spend Christmas with her brother, and keeps her hopes for owning a bakery alive by selling gingerbread kits and custom houses—which she bakes in the glorious ranch house kitchen. Ranch owner Nate helps her with her business, but fails to let her know his interest goes beyond professional. Due to some questionable choices, his intentions are misinterpreted to the point where Rachel doesn’t trust him at all—and he has to convince her he loves her before she leaves Marietta for good.

Melissa’s favorite charity is Fisher House, which has a network of homes where military and veterans' families can stay while a loved one receives medical treatment. Currently there are 71 Fisher Houses located on 24 military installations and 29 VA medical centers. They also have programs to use donated frequent flier mileage and hotel points to help families of injured service members and give out scholarships. Melissa says, “I first learned about Fisher House through another organization I volunteered for and love how much Fisher House does to help military families.”

Also in the collection is Katherine Garbera’s A Cowboy for Christmas, a second chance at love story featuring Annie Prudhomme, who couldn’t leave Marietta, Montana fast enough as a teen, leaving behind her boyfriend in search of bigger, brighter things. But she learns brighter is not always better, and after her ex-husband loses everything and winds up in jail, she is forced back to her family farm, humiliated, to a community who expects her to leave as soon as she can. But Marietta looks a lot better this time around, and her high school boyfriend has grown into a man any woman could want. Finding her way is a lot like coming home.

Katherine’s shares, “From the time I was a little girl, we were always going to the St. Vincent De Paul Society at our church with food, clothes we’d outgrown, and toys that we no longer played with. I didn’t know that it was a charity at first. I only knew what my mom had told me—that St. Vincent helped those who needed it. I loved that idea. And still do today. No matter where I’ve lived in the US (including Florida, Texas, California, and Illinois) and in the UK, I’ve always made finding my local St. Vincent De Paul society my top priority. And I give time, money, food, and the clothes and toys.”

Finally (for this post at least) I listened to Patience Griffin’s It Happened in Scotland, Book Six in the Kilts & Quilts series. If you haven’t discovered this series yet, I highly recommend it, and if you’re an audiobook fan, these are terrific. In fact, the audio for this title just won the AudioFile Earphones Award for narration. (Kirsten Potter is the narrator, and she does a great brogue. Thanks to Tantor for the copy.)

After pulling herself out of a three-year fog of grief over the loss of her husband, Joe, Rachel is bringing their five-year-old daughter to see his hometown of Gandiegow and visit with his grandfather. But Rachel wasn’t planning on running into Joe’s cousin, the man who made her have second thoughts at the altar...

“The charity I’m most passionate about is the National Kidney Foundation®.

My best friend’s daughter Amber, at twenty-four, was experiencing uncommon tiredness. A visit to the doctor shocked us all by revealing she had Stage Four Chronic Kidney Disease and needed a kidney transplant in the very near future. How could this be? This beautiful young woman seemed the vision of health. While trying to deal with this news and the impending kidney transplant, I wrote The Trouble With Scotland with Amber’s blessing, where the heroine has recently received the news that she, too, needs a new kidney.

Post-transplant, Amber and her father (her donor) are both doing well. The National Kidney Foundation was a great support to Amber and her family before and after her transplant. I love the Foundation’s dedication to the awareness, prevention and treatment of kidney disease, working with hundreds of thousands of healthcare professionals, millions of patients and their families, and tens of millions of Americans at risk."

If you’d like to donate to the National Kidney Foundation, click here to see the page the foundation set up for Amber. To learn more about Amber’s story and Patience’s decision to write about kidney failure in her book, check out her post.

Happy Christmas in April! Feel free to share your thoughts about these or other favorite charities.