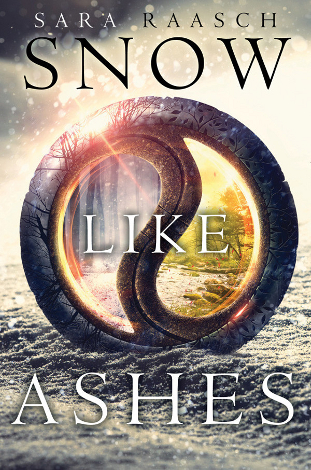 Talky Talk: Tale of the Seasons

There’s a lot going on on this cover. First, you have a background that suggests snow (or ashes). Second, you have a stone yin-yang with trees and leaves etched into it. Third, you have seasonal scenes inside the yin-yang. On the left, I think, is winter, and the right looks like autumn. Or maybe spring? Then there’s the red splotches on the yin-yang. At first I thought they were flowers, or birds, but they’re on the winter side, too. And finally, on top of it all, is the title, in two different colors. I’m honestly not sure where to look…or what to think.

Sixteen years ago, 25 refugees from the kingdom of Winter escaped after the kingdom of Spring attacked, without mercy. Now, only eight remain. Meira is one of them, an orphaned young woman who wants nothing more than to be a good soldier and serve her kingdom—and the young king, Mather, who happens to be one of the eight remaining Winterian refugees.

But living life on the run isn’t easy. Nor is serving a king who she’s grown to feel more than just loyalty and devotion to. Regardless, Meira will do what it takes for the good of her country, even if her choices lead her down a most unexpected path.

Meira has been raised among soldiers and courtiers, who, because of their circumstances, have become soldiers, even if they didn’t want to. But Meira actually wants nothing more than to be a soldier, to go on missions to benefit her small group and their people as a whole. To that end, she trains and works hard to become the best soldier she can be. I’m not entirely sure that I would get along well with someone who wants nothing more than to take part in dangerous missions and fights, but the fact that she questions her lot in life makes her a much more well-rounded and interesting character.

Although Snow Like Ashes has a bit of a love triangle within, Meira doesn’t actually have enough time during the story to really figure out much of her relationship “stuff.” However, just because she’s busy doesn’t mean that she’s immune to the male species, which leads to a great scene in which she accidentally stumbles upon a soldier’s training ground—and a bunch of sweaty, shirtless dudes training.

Talky Talk: Tale of the Seasons

In Snow Like Ashes, Sara Raasch has created a world that—if not entirely feasible—is quite interesting. Broken into eight kingdoms, the continent (?) of Primoria is a magical place. Four of the eight kingdoms, the Rhythms, are pretty normal. They experience the four seasons like most of us (who don’t live in Texas…where it is nearly 90 degrees at the end of October…not that I’m bitter…) do. The other four kingdoms, however, are called the Seasons, and each one experiences only one season all year-round. I found myself getting a little stuck while reading on the hows and whys of such a place, but chalked it up to #becausemagic. (The Seasons sit atop a chasm of magic as old as the world itself.)

The story is told from Meira’s POV. She’s a strong main character, but can be rash and impulsive. At times, I wanted to yell at her to be careful, to think before she acted, but at the same time, the fact that we, as readers, got to figure things out along with her made for an engaging read.

As you might have assumed, the kingdom of Winter is one of snow and freezing temperatures. The Winterian people have evolved to be comfortable in such weather. But I am not a Winterian, and the idea of having to live in a place that is cold and snowy all year long makes me shudder. Winter can be a gorgeous season, but having spent four years trudging to and from classes in it four to five months a year makes one tire of it quickly. (At least, that’s my experience.)

Although you’re the start of a new series, Book, your story and strong characters make me want to find out what happens next. I’d even put on thermal undies and a giant puffy winter coat to brave your chilly temperatures, and that’s saying a whole lot.

Mandy lives in Austin, TX, where she's an editor/writer for an educational non-profit by day and a pop culture junkie by night. When she's not ensconced in a book for Forever Young Adult, Mandy can be found swooning over superheroes, dreaming of The Doctor and grinning at GIFs.