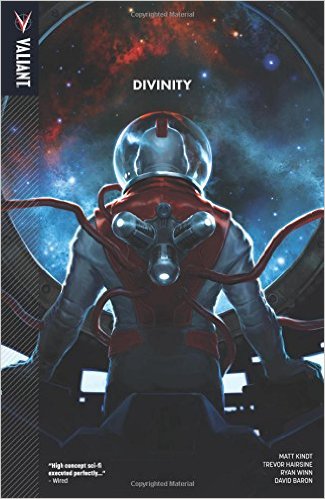 The thing about being sick with a cold and in bed is, while you’re miserable, you don’t want to just lay there sipping orange juice and chicken noodle soup while flipping through the wasteland that is daytime television. I mean, you could…but have you seen daytime television these days? Wasteland is a bit of a compliment. Then there’s the DVR, that slim box under the television where you’ve been stock-piling seasons of Fargo, Hell on Wheels, and a slew of new fall shows. And don’t even get me started on the Netflix queue.

Or, if you’re like me, you can prop yourself up in bed and try to take the top layer off Mount To-Be-Read. Which brings me to Divinity, a new graphic novel from Matt Kindt and Trevor Hairsine, published by Valiant.

Divinity has a lot going on. The title character, also known as Abram Adams, is born in Communist Russia in the 1940s, is abandoned, adopted, orphaned, and taken in by the State. By the ’60s, the Cold War is on, and Russia intends to win it by sending a Cosmonaut not into orbit, not to the moon, but to the farthest reaches of the galaxy. The technology includes a kind of suspended animation where the Cosmonaut spends a span of time in a semi-conscious, dreamlike state where his metabolism slows to a crawl, and he wakes at intervals to exercise, eat, and drink. The mission is intended to last 35 years. The launch is done in secret, and as the Soviet Union falls and the Cold War ends, the mission is forgotten, even denied by those who pioneered it.

Fast forward to 2015. A being with godlike powers has arrived on Earth and set up camp in the Australian Outback. People from all over make the long pilgrimage to see him and experience the miracles he brings. They say he gives you what you want, no matter that that might be. He sees through to your soul, they say, and simply knows.

This was an interesting read. The contrast of Soviet Russian in the ’60s with modern day Australia, along with elements of Buck Rogers and Star Trek, all comes together into a very cerebral science-fiction story cloaked in a superhero tale. Abram is a complicated character who just wants to come home again and be with his family. It’s that desire that drives him to give others what they most desire. And that power is what scares a lot of folks, which is why they send in the spandex crowd to stop him. Add to that a layer of questioning what it means to be Russian, along with a communist with godlike powers, and the story amps up to a whole new level.

Whether you’re sick in bed or just looking for some great science fiction, this is the book for you.