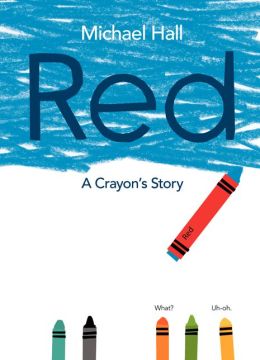 Author-illustrator and graphic designer Michael Hall creates children’s books with bright colors; playful shapes; and sentences, for the most part, that beginning readers can handle. A “simple and engaging approach,” as he puts it at his website, is what he’s going for, and boy, does this deceptively simple approach work. I’ve enjoyed his picture books over the years—especially sharing them with children (many of them make great story-time reads)—and his newest picture book, Red: A Crayon’s Story, is one of his very best. It’s filled with such wisdom, this one.

The book’s cover tells you a lot: We see a blue crayon with a red label, drawing a blue sky. Underneath, a handful of other crayons look on in disbelief. “Uh-oh,” one of them says. (Be sure to remove the dust jacket, and you’ll get a surprise—a series of happy blue scribbles.)

The story is told from the point of view of a pencil. “He was red,” the pencil tells us on page one. But there our hero stands again—a blue crayon with a red paper label.

In a series of spreads, we see friends and family members watch the hapless crayon draw everything blue—a blue fire truck, blue strawberries, a blue ant, blue hearts, blue foxes, and blue cherries. He even joins forces with yellow to attempt to draw an orange, and needless to say, it ends up being a “big greenish” piece of fruit, which disgusts his yellow-hued friend. Everyone has an opinion: The army green crayon says he’s “got to press harder,” and the steel gray crayon says he just has to apply himself. (The “sunshine” crayon, ever the optimist, adds, “Give him time. He’ll catch on.”) Various craft supplies even chip in to help: The masking tape, figuring he’s “broken inside,” wraps some tape around his middle. The scissors snip his too-tight label. Our narrator, the pencil, decides he isn’t as sharp as he could be, so he sticks his head in a pencil sharpener.

Nothing works. In one very funny spread, he just saunters off in a frustrated scribble, after drawing a traffic light with blue, yellow, and green circles. Now, I refer to it as funny, but one of the great strengths of this book is that our misidentified protagonist experiences a wide range of emotions. On this particular spread, you can’t help but laugh at his scribbly blue light, but at the same time you feel sorry for the poor guy. His frustration has reached all-new levels.

All’s well that ends well when he makes a new friend, a berry-colored crayon, who straight-up asks Red to draw a blue ocean for a berry-colored boat. Berry is a perceptive one, and don’t we all need those insightful friends in our lives? When Red effortlessly draws a blue wave, he marvels at how easy it was. “I’m blue” he exclaims later.

As you can see, this is an effective and thought-provoking story for readers of all ages about self-identity and acceptance, but oh what I wouldn’t give for all children’s books to depart such wisdom in a manner this subtle and seamless. Children will immediately get the Red crayon’s plight, and there’s a handful of adults I’d like to hand this book to, as well. Labels schmabels. Be who you were born to be. It’s such a positive and life-affirming notion, all wrapped up in a well-designed, non-fussy and fully entertaining book that never once wags its finger in the reader’s face.

For the smart and accessible illustrations, Hall used his computer to combine and color crayon drawings and cut paper. On the final spread, Red lets loose, scribbling and giving the sky its own blue, while his friends and family members watch from below. It’s an exuberant moment.