The Comics Behind 'Captain America: The Winter Soldier' 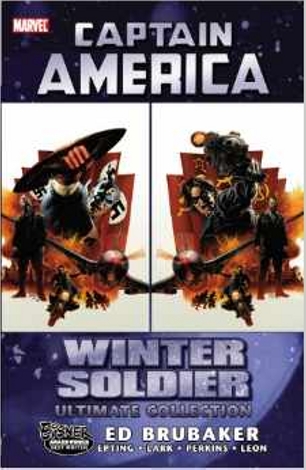 I've tried to avoid the more mainstream superhero comics, but with Captain America: The Winter Soldier hitting the big screen this weekend, I thought Cap deserved a little love. So I want to take a look at several collections you can pick up that detail Captain America's long journey from a hero of World War II to 21st-century superhero.

Probably one of the most enduring characters to come out of comics, Captain America has continued to remain popular with comic book fans long after the golden age from which he was created. Steve Rogers began his career as Captain America in 1941 in the pages of a Timely Comics publication (a precursor to Marvel). Created by Jack Kirby and Joe Simon, Cap's humble beginnings and patriotic spirit were a hit with fans young and old. He was often pitted against the Nazi's, or the diabolical Red Skull, who were trying to defeat America and its allies and take over the world. Like any good superhero, Cap had a sidekick, a plucky young boy named Bucky, who continues fighting with Cap well past the end of the war. In a retcon of Cap's history, both Captain America and Bucky went missing after World War II.

But for the original stories, I suggest you pick up Golden Age Captain America: Omnibus Volume 1 (978-0785168072). This collection contains Captain America Comics #1-12. If you're unfamiliar with Jack Kirby's body of work, this is a nice place to start. Together with Simon, Kirby had a hand in a lot of the comic books born during the Golden Age. Later, he partnered with Stan Lee to bring us many of the Marvel comics characters we know today. In this book, you'll see a lot of things that became staples of his style and career. Though dated, the stories are still strong, too.

Lastly, I suggest Death of Captain America: The Complete Collection (978-0785183792) This collection contains issues 22-42 of the 2005 Captain America series, plus Winter Soldier: Winter Kills (One-Shot). A major upheaval in the Marvel universe wa

s an event called “Civil War.” One of the casualties of that war was Cap himself—and this tells the story of the aftermath, of a world without Captain America. Again written by Ed Brubaker, this story—while touching on a lot of characters who knew Cap well—also does a lot to bring Captain America into the modern age in a way we haven't really seen before.

Though created in a very different time and place, Captain America has endured well into the 21st century. As new writers and artists tackle the character, we see new possibilities for a man who is out of his own time, yet still sparking something in fans everywhere. I, for one, can't wait to see the new movie.

Patrick Hester is an author, blogger and 2013 Hugo Award Winner for Best Fanzine (Editor - SF Signal). He lives in Colorado, writes science fiction and fantasy, and can usually be found hanging out on his Twitter feed. His Functional Nerds and SF Signal weekly podcasts have both been nominated for Parsec awards, and the SF Signal podcast was nominated for a 2012 and a 2013 Hugo Award. In addition to his Kirkus posts, he writes for atfmb.com, SF Signal and Functional Nerds.