A Courtship Most Magical 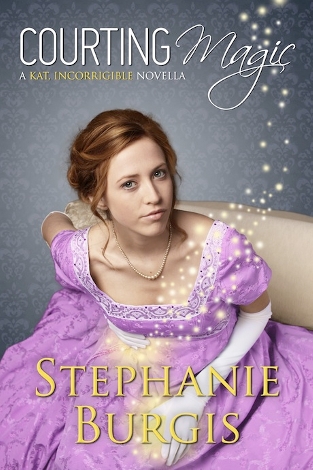 I might have dreaded my introduction to Society ever since my sisters and stepmother had first begun planning it, three years earlier. I might have dragged and kicked my heels and put it off as long as possible. I might even be convinced with all my heart that it was absurd to waste a perfectly decent evening making small-talk in a crowded room while gentlemen I didn’t even know judged me like a filly up for auction....

I refused to allow them to be correct.

Kat Stephenson is back at it again in Courting Magic—but this time, the romantic shenanigans involved in solving a magical mystery are not her sisters, but her own.

Set six years after the conclusion of Stolen Magic, Courting Magic is Stephanie Burgis' self-published novella, continuing heroine Kat's story. Now an eligible young woman, Kat faces her most frustrating task yet—making her society debut, and thus announcing her eligibility for marriage. Headstrong, improper Kat naturally has no interest in romantic entanglements, not does she have any intention to shackle herself to a husband. So, when her dress fitting is interrupted by a magical summons by the Guardians—the secret society of elite magic workers, who maintain balance and protect the realm from supernatural wrongdoing—Kat is eager and ready to jump on the case. It turns out that someone has been robbing genteel society members at soirées of the season, using magic to confound and impersonate guests. With the help of three other fellow Guardians, Kat is ready to help find the criminal...at her own very first debut.

United in their mission to nab the thief, the four young Guardians set their sights on an upcoming ball. The only complication? The three young men whose help the Guardians require are slightly stuffy Marquess of Lanham, the shameless lurid George Packenham and…Alexander Harding. Alex, you might recall, is the young, feisty urchin who helped Kat solve the mystery at the heart of Stolen Magic; he's also the young man who stole a kiss from Kat six years earlier, and someone she has never been able to forget.

As the group closes in on the magical impostor and thief, Kat finds herself in her most dangerous position yet—she's in grave danger not just of being harmed by magical villainy, but of losing her heart.

Confession time: I love the Kat Stephenson books. I love them so very much. The best thing about the books has always been Kat's incorrigible, stubborn voice—and I'm so very pleased to say that even as Kat grows up in Courting Magic, that core character voice remains constant. In this novella (which can be read as a standalone story, by the way), Kat is every bit as brash, outspoken and headstrong as ever. The only difference this time around, of course, is that there are certain things that a 12-year-old can get away with that aren’t so simple for an 18-year-old to pull off. Mouthing off to a high-powered peer or refusing a dance invitation or sneaking away to investigate with a male companion, for example, are all things that might be ok for a younger girl, but could mean disaster for Kat’s blasted reputation as an eligible young lady. I loved this consideration in Kat’s maturity and arc as a character, even though the book is decidedly of the light, frothy regency romance variety.

And, truly, that’s what Courting Magic is: Kat’s romantic adventure. Her sisters each had their own, with Kat working on the outside looking in as a child observer; in Courting Magic, we see Kat stumble her own way through love with the same boy she’s been thinking about since she was a brash young girl. Their romance is predictable (hey, it has been simmering for six years!), but both Alexander and Kat are so likable as characters that it works. Plus, I love that Stephanie Burgis lets Kat take the reins in the relationship as it unfolds between the pair—from sneaking out into the garden, to a first kiss, to even a marriage proposal.

The only negative, really, is the fact that Kat *is* a full young adult! One of the main things I loved so much about the younger Kat Incorrigible books was that Kat was always telling the story of her mooning, love-struck sisters. It was Kat who would help her sisters realize and conquer their own romantic mishaps, mystified by their behavior. There isn’t that kind of humor or levity in this book, unfortunately, and I missed that. But, like anything else, life goes on, people grow up, and Kat Stephenson is no exception to these truths.

And you know what? Her happily ever after is every bit as sweet as Kat deserves. Absolutely recommended, for fans both old and new.