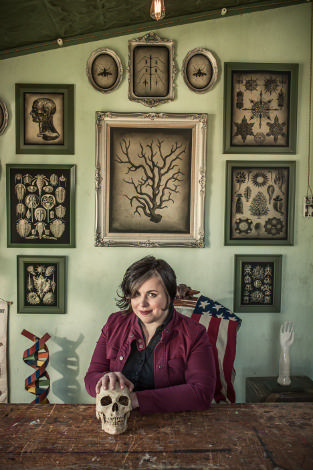 He’s the game-changer you’ve probably never heard of. Thomas D. Mütter was an eccentric surgeon in a medical era that could easily be described as barbaric. Most have heard nightmarish stories about Civil War battlefield surgeries and makeshift infirmaries. But what’s not commonly known is that in early to mid-nineteenth century America, formal medical treatment wasn’t much more sophisticated.

“The surgery room itself was such a horror, in terms of what they didn’t know,” says Cristin O’Keefe Aptowicz, author of the Kirkus-starred Dr. Mütter’s Marvels: A True Tale of Intrigue and Innovation at the Dawn of Modern Medicine. “Without anesthesia, all of the surgeries were done with patients being fully awake. Sometimes they’d try to use opium and sometimes they’d try alcohol. But ultimately the adrenaline rush is always going to overpower it. So not only are you performing surgery on someone who’s screaming and begging you to stop, but you’re dealing with unwashed hands, unwashed tools, and the absence of electric lighting. How do you even make that work?"

Such was standard surgical practice in the early to mid-eighteen hundreds.

Boldly embracing and advocating for the use of ether during surgical procedures was just one of the ways Mütter initiated a quality of medical care that’s commonplace today. Once dubbed the P. T. Barnum of the surgery room, Mütter’s expansive personality was instrumental in revolutionizing relationships between professors and students. He taught at Jefferson Medical College in an age when it was assumed that physicians would call the shots, unquestioned. But Mütter took a more personal, down-to-earth approach. He engaged in classroom conversation, and encouraged students to ask questions.

Aptowicz, a native Philadelphian, grew up knowing about the Mütter Museum because it was in her hometown. But she didn’t become immersed in its history until she was a college student.

“I paid my own way through NYU,” she says, “so I was always looking for scholarships to help me offset the cost. The Sloan Foundation was offering a fellowship for a screenplay or a play written about a scientist or a scientific discovery. And I thought, ‘I can do this.’ ”

She took on the project to get financial aid, but ended up getting so wrapped up in the story she subsequently applied for and won several grants which enabled her to write the book.

One of the things Aptowicz admires most about Mütter, who only lived a brief 48 years, was his willingness to take monumental risks in order to help “monsters”—people who were marginalized due to severe deformities or injuries. The “Mütter Flap,” for example, was a precursor to what is now commonly known as skin graft surgery.

“He would cut out the damage, and that was the real risk,” says Aptowicz. “One of the reasons doctors would not do this is because if this didn’t work, it was a death sentence. If the [grafted] skin rotted, you had this enormous wound open to infection that would just bleed out.”

But Mütter’s gambles paid off, and his early techniques evolved into practices that have improved the quality of life for untold thousands of people.

It’s difficult to imagine how radically the practice of medicine changed in a span of about 50 years. Aptowicz says that a person who has watched the television series ER knows more than doctors did in the 19th century. The medical community widely dismissed the idea of infectious and communicable diseases until the late eighteen hundreds. As a result, doctors and surgeons didn’t sterilize instruments or practice regular hand washing, which unwittingly made them agents of infection. Though he couldn’t yet prove it, Mütter was an early proponent of germ theory and thus took great precautions to preserve as clean a surgical environment as was possible.

While he was entirely devoted to his profession, Mütter was dubbed a “dandy” of his time, and was known for his dramatic wardrobe.

“He wore very flamboyant colors,” Aptowicz says, “and his lecture tickets were bright pink, when others’ were brown and gray. He used to match his suits to his horse and carriage. I think an element of it was that it was attention-getting, and that may have made his patients more comfortable. Here’s a guy with a tumor hanging off his face, and in walks a guy wearing a baby blue silk suit.”

Many assume that Mütter’s “marvels” are the scores of freakish specimens and peculiar contraptions he collected, which are now housed in the Mütter Museum. But Aptowicz believes that his legacy goes far beyond the peculiar relics he left behind.

“To me, the marvels were his surgeries,” says Aptowicz. “He saw populations of people in severe need, and worked hard to perfect surgeries that would help create a better standard of living for a population that was largely ignored. He wasn’t thinking, ‘What’s easiest for me?’ ‘What’s the most show of confidence?’ or ‘What is everyone else doing?’ Instead, he was saying ‘What can I do to make their lives better?’ And he just did it.”

Laura Jenkins is a writer living in Austin.