Deborah Kalas Tells the Stories of Wild Horses via Photos 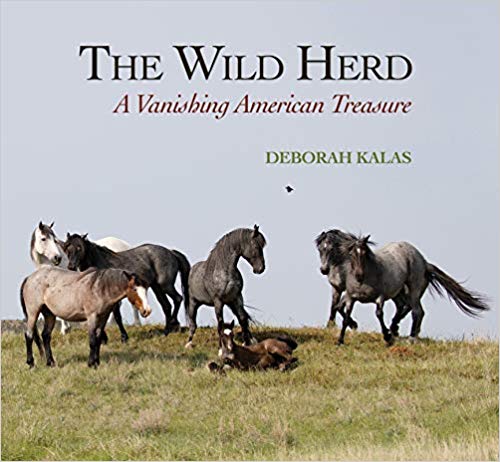 As a portrait photographer, Deborah Kalas is accustomed to being in control. “You choose the setting, you choose the lighting,” she says, and she can always tell a human subject where to stand. When she began taking pictures of wild horses, she had to learn a new way of working.

“First, you have to find them,” Kalas says. In Theodore Roosevelt National Park, the 70,000-acre Badlands preserve in North Dakota where many of the pictures in The Wild Herd: A Vanishing American Treasure were taken, that can mean hours of hiking before encountering any of the approximately 130 horses that live there. When she does find a group of horses in the wild, they are the ones in control of the photography session. “You definitely don’t want to create any stress for them,” Kalas says, so she keeps her distance and waits for the horses to reveal their stories. “It’s a lot of watching and being patient and calm.”

After spending six years observing the horses at different times and in different locations, she is able to easily identify them and understand their relationships, giving her insight into what she describes as “drama in the Badlands.” The images in The Wild Herd show mares nurturing foals, young horses playing together, and bachelor stallions showing off as they try to persuade mares to join them. “It’s very similar to human family dynamics,” Kalas says. “You see…amazing things all the time.”

The bachelors, who are “like a group of guys out looking for women,” provide Kalas with some of her best vignettes. She tells the story of one stallion who was very persistent in approaching the mares in a group of bands grazing near each other. “One by one, each of those band stallions went out and battled with him,” she says. “It was like they all took turns telling him to go away.” Despite the dominant behavior of the band stallions, the bachelor returned the next morning to try—and fail—again. (For readers who are unfamiliar with horse behavior, The Wild Herd includes an illustrated glossary of the activities depicted in the book. “Most battles end quickly,” Kalas explains, “unless a young stallion really is intending to take over an older stallion’s band.”)

On another visit, she says, “there were three bachelor stallions who were stirring up all the mares” when several bands of horses gathered on a high piece of land. “I watched this band stallion move his entire [group] to the edge of the cliff,” Kalas says, and when the lead mare was reluctant to go down the steep incline, “another mare sort of took over her job.” She watched as the stallion very carefully moved his mares down the cliff and out of the bachelors’ range.

“What interests me most are [the horses’] interactions with each other and the environment,” Kalas says. She began taking pictures of North Dakota’s wild horses during a workshop taught by a fellow photographer, but her own connection to the animals reaches back to her childhood. “My room was filled with my horse show ribbons,” she says. “I spent every waking moment at the stable.”

Kalas also began writing when she was young, though she never considered it as a career. In fact, it was writing that led her to photography. As a teenager, she shared some of her work with a photographer who encouraged her to pick up a camera. “I read your poetry and knew you had something to say,” he told her. She ultimately turned her interest in photography into a career and works with clients across the country, splitting her time between the Hamptons, Palm Beach, and Santa Barbara.

Kalas initially planned to hire a writer to produce the text that accompanies the photographs in The Wild Herd but ended up writing it herself. With the help of an editor, “I was able to bring out what I wanted to say,” she says. The result was a season-by-season narrative of the horses’ lives, as well as a guide to horse behavior that helps readers understand what the photographs depict:

Fall bands are content. Their bellies are filled in preparation for winter. The horses’ coats are growing longer with the shorter days and cooling nights. Friendship and band bonding deepen among the many wild horses living in close proximity to each other.

Kirkus Reviews calls The Wild Herd, which is Kalas’ first book, an “exquisite photographic record of a year in the horses’ lives.” Kalas, who describes her goal in depicting the horses as figuring out “what’s going to make an image that goes beyond a documentary,” is pleased with the final product. Although there were logistical challenges early in the process, Kalas found a number of pleasant surprises as well, including the addition of a cover that feels like horsehair.

She also notes that because the photography was a multiyear project, some of the horses showcased in the book have since died. “It’s an honor,” she says, to have been able to share their stories.