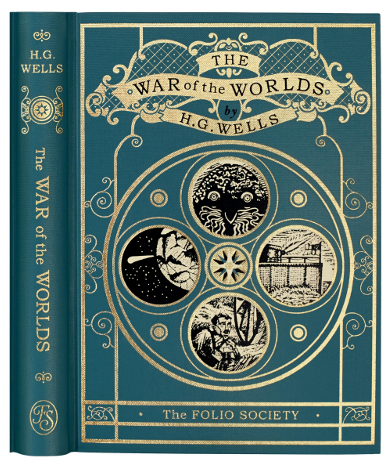 I like to think that my taste in speculative fiction encompasses a wide spectrum of stories – not only stories written in different sub-genres, or in different writing styles, or by different writers…but also stories written in different times. I love classic science fiction because, despite its faults, it offers a window into our past. I wish I could say I've read all the classics…but the numbers are against me. There are more classic stories than I will ever have time to read. And yet I did recently find time to read some speculative fiction classics, stories I (mostly) hadn't read before. I'm glad I did. Here's why:

The first classic is the one most recently written. If you recall, a few months back, I read the graphic novel adaptation of Octavia E. Butler's novel Kindred. It was the story of a black writer named Dana who, through some unexplained phenomenon, is transported from 1970s California to a pre-Civil War slave plantation. The graphic novel adaptation by Damian Duffy and illustrated by John Jennings was fantastic. I was so enamored of it, that I just had to read the 1979 classic on which it was based. Luckily, I had an unread copy lying around. (Hello. My name is John, and I'm a biblioholic.)

My visit to the sf classics was far from over. I was reading the quite enjoyable science fiction anthology Dystopias & Utopias edited by Laura Bulbeck, an anthology that offers a diverse set of short fiction stories by both modern writers and writers of yesteryear. One of the chapters in the book was not a short story at all, but a quite lengthy excerpt – 9 chapters – of Edward Bellamy's classic 1887 science fiction novel Looking Backward. This is another case where a shorter read leads me to a longer one.

Looking Backward: 2000–1887 is a utopian novel about an American man named Julian West who falls into a deep, hypnotic sleep in the year 1887 and awakens in the year 2000. Across those 113 years, the imperfect capitalist United States has been transformed into a socialist utopia. I'll be honest here…as far as plot goes, that's about it. The bulk of the novel is West's benefactors telling him all about the magnificent future in amazing detail. No detail is left out. West learns about government, education, employment, economy, and so much more. The future, it turns out, is seemingly without problems, to hear Bellamy tell it. Of course, we know that all systems have their problems – a reality that Bellamy and several others address in sequels to this Utopian classic. Even so, reading Looking Backward was an utterly fascinating experience and a great example of social science fiction at its best.

The War of the Worlds by H.G. Wells

The next stop on my unexpected tour of the science fiction classics, 1898, was enjoyable for two reasons. First was the story itself. The War of the Worlds by H.G. Wells is an indisputable classic of science fiction. Considered to be one the first stories about alien invasion (and especially Martian invaders), Wells' narrative delivers a first-person account of several cylinders that land on Earth from outer space. The Martians do emerge from their ships, but they have difficulties coping in Earth's environment and so retreat back to their cylinders to begin creating giant tripod machines.  Although originally thought to be peaceful, unwary humans learn that they do not have good intentions. A simple swipe of the Martins' heat ray weapon, not to mention their deadly chemical weapon, decimates people and cities across the English countryside. Scholars will be quick to note that Well's depiction of the invasion is meant as social commentary on colonialism and there are a lot of parallels to draw upon to support that claim. Readers can read as much or as little into that as they want. To sum up: come for the tripods, stay for the imperialism!

The second reason my reading of The War of the Worlds was so enjoyable was because I consumed it via a handsome new slipcase edition of the novel just recently published by The Folio Society. The Folio Society, you may recall, is the publisher of stunningly beautiful books. The biblioholic in me is firing on all cylinders whenever I'm lucky enough to get my hands on one. (My well-washed hands – see previous note on bibliolism.)  The War of the Worlds is lavishly produced and includes wonderful illustrations by Grahame Baker-Smith, whose art perfectly captures both the mood of the story and the era in which it was written. It's a treat for science fiction fans and a must-have for readers who love physical books.

The Call of Cthulhu & Other Weird Stories by H.P. Lovecraft

Another must-have book is The Folio Society's beautiful edition of The Call of Cthulhu & Other Weird Stories by H.P. Lovecraft and edited by S.T. Joshi. Like their other books, the publisher spared no expense to bring this definitive edition to life. This one includes fantastic illustrations by Dan Hillier, whose work echoes the gothic horror of the stories themselves, and a preface by comics legend Alan Moore. Even the endpapers include a design that will, for a split second, make you think you picked up the Necronimicon itself.

Horror fans are undoubtedly familiar with the works of Lovecraft, who is often credited as the father of modern horror. The collection includes eighteen of Lovecraft's best stories, half of which are part of the creation that the author is most known for: the Cthulhu Mythos. The mythos revolves around a group of ancient deities from space known as "The Great Old Ones" who once ruled the Earth before they fell into a trancelike sleep. The central figure of the mythos is the creepily tentacled deity named Cthulhu. The Cthulhu Mythos resonated so much with fans that it became a shared world that's still thriving, and reading The Call of Cthulhu & Other Weird Stories, it's plain to see why. Lovecraft's affinity for inhuman horrors gives his stories a decidedly otherworldly tone. You don't just read the stories, they settle on top of you. The pivotal story "The Call of Cthulhu" is often cited as the must-read Cthulhu story – and it's very good – but I'd be lying if I didn't find "The Hound" just as unsettling.  These are stories that stay with you long after you've walked away from the book itself.

Some would say that classic science fiction is too far removed from the present to be either enjoyable or relevant. I say: pick up any one of these classics and happily prove them wrong.

Art for The Folio Society edition of H.P. Lovecraft's The Call of Cthulhu & Other Weird Stories by Dan Hillier.

Art for The Folio Society edition of H.G. Wells’ War of the Worlds by Grahame Baker-Smith.