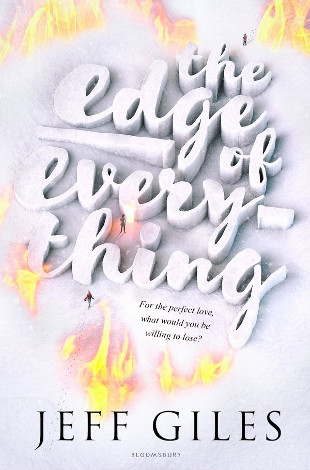 Is that snow on fire? Something tells me this kind of flame calls for something more than your standard “stop, drop and roll.”

A few months ago, Zoe’s father died in a caving accent, and Zoe’s felt adrift since. She’s trying to move on with her life, but the unanswered questions—Why did he go alone? Why did the police stop searching for the body?—are hindering her grieving process.

When her little brother Jonah gets lost during a blizzard, Zoe stumbles upon an otherworldly boy who might be her path to true healing. And she, his salvation.

Zoe’s a cool chick, I am intrigued by her experience exploring caves (the “caving” I spoke about earlier), and I’m totally envious that she lives in Montana, which is probably one of the most beautiful places I’ve ever traveled through.* But she’s careless, and inconsiderate of the feelings of her friends and family. She’s positive that she knows what’s right and what’s wrong, but isn’t willing to take a step back and look at other people's side of the situations. She’s impulsive, and does whatever she wants, often to the detriment of others. Will she grow up to be better, once she has some real living under her belt? Perhaps, but I’m not seeing a real strong reason to want to stick around to find out.

*I traveled through in the summer, mind you. I’m not sure I’d feel the same had I been there in winter.

The chemistry between Zoe and X, the otherworldly boy who she met during the blizzard, had promise. She’s a human girl looking for answers; he’s a bounty hunter from a literal hell called the Lowlands. I typically love a star-crossed love story, and certainly didn’t hate Zoe and X’s. But the instalove is just so sudden and unexplained, and as much as Jeff Giles tells us the two are MFEO, I never truly felt it.

The Edge of Everything doesn’t breath new life into the paranormal romance sub genre, and although some of the details have been changed, it’s a familiar story along the lines of Twilight, The Fifth Wave, or any other of the numerous YA books that tell the story of an “unremarkable” young woman who falls for a broken, not-exactly-human boy. Giles’ main characters blur into YA trope territory, and his secondary characters—the precocious little brother, the dumb but sweet jock, the edgy lesbian best friend—although slightly more original, still seem all too familiar.

Giles’ world-building also leaves something to be desired, but I found his descriptions of the Lowlands interesting, with their hierarchy of “lords,” oddly goofy guards, indentured bounty hunters and prisoners—and the ominous “higher power” that rules them all (or so they all assume). I’d love to know more about that part of this world, and we’ll hopefully learn more in subsequent books.

It’s nice that X isn’t a vampire, a werewolf, or an alien, but he’s still got that “heart of gold and a penchant for rebelling against the injustices of his ruling class” thing going for him.

I didn’t know that this was the beginning of a series when I first started the book, but it was pretty obvious about halfway through, when I realized that the number of plotlines in play couldn’t satisfactorily be wrapped up in the remaining pages. I do, however, appreciate that Giles won’t leave Zoe and X hanging, particularly after this first book’s resolution—it’s not a cliffhanger, but it’s certainly open-ended.

Zoe and X fall for each other—hard—the first time they meet. I’m a believer in true love, and tangentially love at first sight, but I need a bit more substantiation to buy into this sort of situation when I’m told that it’s a vital part of a story. I mean, Zoe’s the first girl X has ever talked to. *side eye*

Relationship Status: I’ll Be Back

Although a lot of what I’ve said in this review, Book, might lead you to think that I didn’t enjoy our time together, that’s not exactly the case. You didn’t challenge me, but you did remind me of many books I’ve read and enjoyed over the years, and there’s something to be said for the glow of nostalgia. I wouldn’t be averse to meeting up again.

The Edge of Everything is available now.