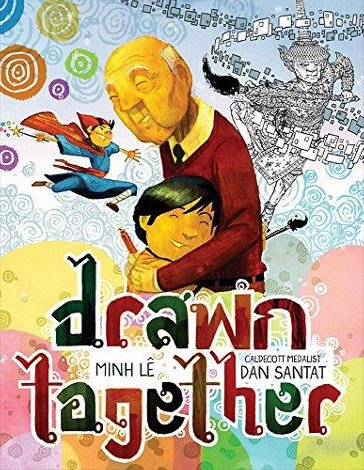 Nothing less than the healing power of art is the subject of Drawn Together, the new picture book from Minh Lê and Caldecott Medalist Dan Santat. When a boy’s mother drops him off to spend the day at his grandfather’s, silence reigns: the boy’s Thai grandfather speaks a language he doesn’t understand. But when he gets out his sketchbook and his grandfather grabs his paintbrush, words aren’t needed to find common ground. For the first time — as Santat’s large-scaled, colorful, dynamic art explodes across the pages in the form of the drawings they create together — the boy and his grandfather truly communicate.

I talked to both author and illustrator via email about the genesis of this collaboration and how the story hits home for each of them.

Jules: Hello, Minh and Dan! Thanks for chatting with me about Drawn Together. How did you two get paired on this one? Was it the usual pairing of author and illustrator by an editor? Or something different? Anyone who wants to answer can do so. One, two, three. GO!

Dan: I was just looking through all my emails (because I don't throw away any of my emails, and my email account would be an organized person's nightmare) and realized that our editor, Rotem Moscovich, had sent me this offer around May of 2015, shortly after winning the Caldecott Medal. I remember reading it and falling in love with it from the very beginning, because it was coming from a very personal place with Minh. I could relate to this — in terms of not being able to communicate with a grandparent, due to language barriers. The story was something that I had wished I had written. By that I mean I've never been known to have worked on or authored books about Asian culture, and it was definitely a thing I felt I wanted to rectify. At the time, it was a matter of trying to fit the book into my schedule, and Minh and Rotem were willing to wait a year-and-a-half for me until I could clear the load of work off of my plate, which I was thrilled about. I could actually partake in the project. I also feel like the release timing of this book couldn't be more perfect.

Minh: On my end, I had just gotten back from the hospital after the birth of our second son when I got the email from my fantastic agent, Stephen Barbara, about the opportunity. After I picked myself up off the floor, we realized that we needed to send you some ideas ASAP, because you were about to get swept up in Caldecott madness. So, I was on the clock to come up with something to hook you within a day or two. Luckily, this is what came up.

I had no idea whether the idea would resonate with you personally (I’m so glad it did), but I did know that this was a story that I would be so excited to see you illustrate.

Dan:Wait. Are you saying you came up with the idea for the book right after I won the Caldecott Medal?

Minh: Yup. So, you can imagine the pressure: "Hey, this dude just won the biggest award in picture books. Now, you have two days to come up with a story idea worthy of a freshly-minted Caldecott winner. … GO!"

Minh: I'm serious! Some rough version of this idea might have been kicking around in my head at some point before, but I clearly remember being up at 3am, rocking our newborn, when the image of the grandson and grandfather drawing together came to me. So, I guess what I'm also saying is that baby Ezra should probably get at least a co-author credit.

I want to back up a bit. Dan, you said the book’s release, in terms of timing, is perfect. What do you mean, in particular? I assume you are referencing, say, the political climate in this country now or the immigrant experience or something similar?

Dan: Yes, exactly. I don't want to say that diversity is a trending topic in children's publishing, because I think that a trend would imply that diversity in literature will eventually fall out of favor in publishing. Right now, it's exciting to see books that reflect the beliefs and attitudes of people coming from multicultural backgrounds get a little more attention than they may have in the past. The awareness of diversity is fresh in everyone's mind. The book has more impact now than it may have had, say, five or six years ago.

Jules: I'm curious about why you held off before on writing about Asian culture? Is there something about doing it now that is somehow more comfortable for you?

Dan: I've been in publishing for 14 years, and I've only authored five of my own titles. I've drawn dinosaurs, Humpty Dumpty, robots, imaginary friends, and superheroes, etc. Most of those titles that I have written were stories I was really passionate about, conceptually, and they were stories I considered to be my best material. I often put my own work off to the side, because I'm so busy illustrating other books, which is why my output has been so slow for all these years. I've never really been offered a manuscript about Asian culture until now.

Right now, I'm currently writing/illustrating a graphic novel memoir, and I'm going through a lot of emotions throughout the process, dealing with some really personal events in my life. Along with that, I had a huge revelation after months of frustration, because the story didn't feel like it was clicking. As a Thai-American, I realized that there isn't much in terms of personal experience I've had with my culture. I don't speak the language; I've only been to Thailand once; and, most importantly, I realized that anything "Asian" that I've ever experienced in my life, in terms of popular culture, has been borrowed from other Asian cultures. Kung Fu movies are Chinese. Anime and manga are Japanese. Movies about struggles during Vietnam existed all throughout the ‘80s and, even now, K-Pop is making a presence in the states for Koreans. When I was a kid, most of the folks in my town didn't even know Thailand was a country.

So, to answer your question, I guess I've never worked on other Asian manuscripts, because I'm not part of other Asian cultures, and maybe it's because I wasn't the right guy for the job. My body of work has made me more employable to other types of projects (funny, cute, etc.) while, at the same time, I'm not even a part of my own culture — to no fault of my parents. It was just a matter of the environment I was raised in.

Minh: It’s funny, because Dan and I didn’t talk about the project during the process, but it’s clear that we have very similar experiences. I feel a little bit more connected to my Vietnamese culture than what Dan just described, but for the most part it’s the same. The cultural relationship was always fraught with guilt about the ways that I felt I had lost touch with it (most prominently, via language).

I actually didn’t even think about the fact that Dan and I were both Asian American until after I sent the pitch. I just thought: this story had elements that would be really cool to see Dan illustrate, because it draws upon the dynamic side of his art (wizards and dragons) but was also rooted in a story with a lot of heart (similar to what me made love Beekle).

But as soon as I started to see sketches, you could tell that Dan was illustrating from a very personal place ... and that was an amazing process to witness.

Jules:Minh, did you specify in the manuscript that the grandfather would be of Thai descent, or was it Dan who added that, as well as the Thai text in the book?

Minh: So, I wrote the characters from a Vietnamese-American perspective but included in a note that, if Dan wanted to illustrate it from a Thai-American perspective, that he should go for it. I didn’t want to pressure him either way, but I was definitely hoping he would go that route.

As a picture book author, the hope is that the illustrator will take a manuscript and breathe their own life and experience into it. I’ve always thought that the collaborations that truly excelled were the ones where the illustrator makes the story their own. And it’s clear through all the detail (and what detail!) that Dan infused so much of himself into the story.

And while some of the cultural details are slightly different from mine, the story as a whole is very much still true to my experience. I think that’s because, at its heart, it’s a story based on the very real relationships with our grandparents. So there’s a personal emotional truth poured into each page that hopefully comes through for the reader.

Jules: What’s next on your plates?

Minh: Next on my plate is probably some steamed dumplings and a side of — oh, you probably meant books, didn't you? Well, we each have separate projects that we're working on, but there's also a yet-to-be-announced something in the works. Dan, you want to take this one? How much can we tease at this point?

Dan: I'm writing a graphic novel memoir for First Second, called You Bad Son, about my life in high school and how I went from a predestined life-of-science to taking a chance at art school, while my mother was undergoing treatment for breast cancer. I have another graphic novel with Scholastic, called The Aquanaut, and I'm currently finishing up illustrations for a book written by Betsy Bird; another book of poetry for Little, Brown, written by singer Rhett Miller; and lastly, I'm doing another Elephant and Piggie book with Mo Willems at Disney-Hyperion.

As for the next project with Minh, I'll just say that I'm really excited about doing the illustrations for this book. The story has a very David Wiesner/Chris Van Allsburg feel to it.

Jules: Thank you both for taking the time to chat with me about this book. Happy drawing.