A Dream Written in the Stars 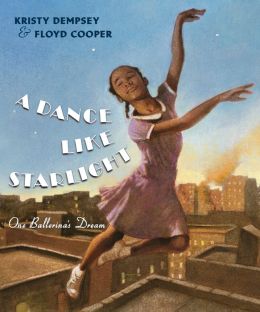 I write in a fairly timely manner about picture books both here at Kirkus and at my own site, but sometimes I feel the need to play catch-up. This column today is all about that—shining the spotlight, that is, on a book that wasn’t released in the past few months. And I mean to tell you I’m reaching waaaay back to January of this year. It was back at the tip-top beginning of 2014—the first week of January, to be precise—that Penguin released Kristy Dempsey’s A Dance Like Starlight: One Ballerina’s Dream, illustrated by Floyd Cooper.

This is a book that wants to inspire young readers. Oftentimes, such inspirational aspirations result in stories that are mildly to moderately (even sometimes excessively) overbearing, but Dempsey doesn’t do that here. She writes in a free verse that is precise and evocative. Check out the opening lines:

Stars hardly shine in the New York City sky, / with the factories spilling out / pillars of smoke / and streetlights spreading / bright halos round their pin-top faces. / It makes it hard to find a star, / even harder to make a wish….

Here, we see a young, African-American girl look longingly into the night sky.

It turns out that her mother, who is always scrimping and saving, works for the ballet school. She cleans and sews costumes there, something she has done since before her daughter was born. This means that the girl has grown up around the school, and she longs to be a ballet dancer herself.

But this is Harlem in the 1950s, and young black girls don’t exactly have a lot of African-American role models in the field of ballet.

The Ballet Master, however, sees her backstage one day. She’s performing an entire dance, and afterwards he takes her face in his hands, though she’s embarrassed to have been seen, to tell her “Brava.” This means the world to the girl, Dempsey writing: “That’s when hope picked my dream up from the floor of my heart, just like Mama said, and it started growing.”

The girl keeps practicing but knows that it’s not likely a “colored girl…[would] ever become a prima ballerina.”

Everything changes when she sees a photo of Janet Collins in the newspaper. As Dempsey explains in a closing Author’s Note, Collins became the first African-American woman hired to perform with the Metropolitan Opera, years before Marian Anderson’s debut at the same place. The girl’s mother saves “half of what she’s put back for a new sewing machine” and takes her daughter to the performance.

It’s here, in a book filled with the grainy and luminescent sepia-toned work of illustrator Floyd Cooper, that we see the exhilarating spread of the girl imagining herself soaring with Miss Collins. They are high above the stage, letting the music carry them. It’s a masterfully composed spread, filled with light, shadow and joy. “It’s like Miss Collins is dancing for me,” the girl thinks. All her hope spills over, “dripping all my dreams onto my Sunday dress.”

The girl and her mother dance their way home after the performance. No longer does the child attempt to spot stars in the light-polluted, nighttime sky. She has seen her dreams in action in the form of Janet Collins, and readers get the sense that this will carry her for a long time.

Remember when Misty Copeland and Christopher Myers spoke with me here at Kirkus about Firebird, the September picture-book release about a young African-American girl dreaming to dance ballet? Needless to say, Firebird would be paired particularly well with A Dance Like Starlight, and both books would go swimmingly with Pam Muñoz Ryan’s When Marian Sang, illustrated by Caldecott Medalist Brian Selznick and released back in 2002.

But I hope that the teachers and librarians and parents of the world pair this book with all picture books about ballet and the arts, since the world of ballet should know no color boundaries. And all readers, each and every one of us, have dreams on the floors of our hearts.

A DANCE LIKE STARLIGHT. Copyright © 2014 by Kristy Dempsey. Illustrations © 2014 by Floyd Cooper. Published by Philomel, New York. Illustration used by permission of the publisher.