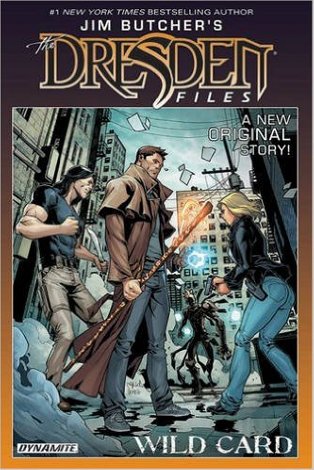 Last time, I gave you a list of horror-themed graphic novels to get your scare on. I was wondering what to do for this post, which will hit just days before Halloween. Luckily for me – and you – I’d preordered something a while ago, and it was perfectly timed – whether I knew it or not – to hit my mailbox in time for a review.

Wild Card is an all-new original story in Jim Butcher’s “Dresden Files”. Published by Dynamite, this shows that Butcher has really found a great medium to deliver new Dresden Files stories to an audience clamoring for more. Like me! Set after White Night, Wild Card brings together issues 1-6 of the limited comic series.

When a couple of women show up in the morgue, no apparent cause of death, Waldo Butters, Medical Examiner for the city of Chicago, calls in the big guns. Specifically, Karrin Murphy, Molly Carpenter, and her Jedi Master, Harry Dresden. With a theory already forming about how the two could’ve died, Harry asks Molly to check for any residual memories or emotions, her abilities being far more capable and attuned to the delicate than his own. Molly find nothing, leading Harry to believe the White Court Vampires might be responsible, having fed upon and killed the women. Forcing Harry to get his half-brother, Thomas, involved to be a bridge to the White Court.

Things get more complicated, though, when a cop ends up murdered, followed by a member of the Marcone crime family. Each death points to someone else, a different faction, and soon, they’re all pointing fingers at each other, and it’s up to Dresden to figure it all out before the city of Chicago becomes a war zone. But he has to hurry, because something old, something dangerous, is already hunting one of his closest friends – Karrin Murphy.

All the players are here, and, once again, the excrement is splattered everywhere due to impact with a fan—if you get my drift. Packed with action and mystery, this is a good Dresden story with plenty for new and old fans alike. Molly’s power is growing, and if you’ve read the books, you know where that is heading, and it adds tension to those scenes. Murphy, too, is growing and we get to see a lot of her in this installment.

If I have a complaint, and maybe I do – maybe it’s two – these original graphic novels are starting to seem a little too formulaic and monster of the week. Elements of this book feel eerily similar to the last, Down Town. I don’t know if that’s a bi-product of the format or what. The books tend to have several things going on at once with lots of plots and subplots to lead you astray from guessing who is responsible for what. This is more straightforward.

That doesn’t take away from the excitement of this story. I fell right in and didn’t put it down until I was done.

The art is amazing, per usual – done by Carlos Gomez and Sean Izaakse.

Since pre-ordering the book, I have to be honest – I forgot about it. The fact it came in time for Halloween is perfect, because there is definitely a horror element to the story. Plus, it’s a new Dresden book in-between the novels, and for this reader? That really hits the spot.