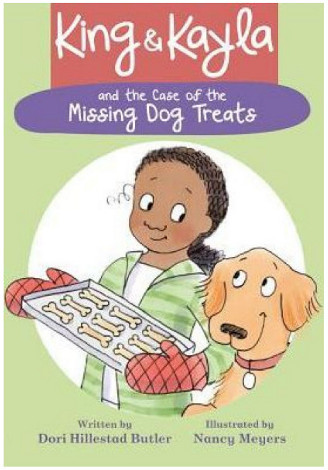 If you are a parent, teacher, or librarian looking for some new illustrated beginning chapter books—as in, the kind most often referred to as easy readers, those for students just getting the hang of reading and ready for stories divided into chapters—today I’m rounding up a small handful of new ones that I think will entertain children. Each has something delightful to offer readers, so let’s get right to it.

Rebecca Bond’s Pig & Goose and the First Day of Spring is the most nostalgic of the lot with, for one, the character of Pig exclaiming things like “goody gumdrops!” repeatedly. It’s the story of a friendship, as many beginning readers are, this one between the aforementioned pig and a goose, named Goose (but of course). Goose flies right into Pig’s life one beautiful Spring morning and strikes up a conversation with her; I love this simple, non-complicated entrance, which flies in the face of the notion that a pig and goose would be an unlikely duo. They hit it off right away, thanks very much. Maybe Goose spotted Pig from high in the sky and just knew.

There are three interrelated chapters here, involving the characters’ introduction to one another, a picnic, and a party. The first chapter highlights Goose’s attempts to teach Pig to fly. As you can imagine, that doesn’t go so well, but a friendship blossoms. Goose is the more self-assured of the two, and Pig admires him and longs to be more like him. In the final chapter, however, Pig’s excellent qualities as a hostess and true friend really shine, Goose acknowledging this: “You are wonderful,” he tells her. “I am very happy to have you as my friend.” It’s a sweet, but never saccharine, set of stories, and the book is altogether charming. Bond, who both wrote and

illustrated this one, brings readers relaxed, carefree drawings in ink with a soft and sunny, primarily pastel watercolor palette, fitting for a book with Spring as the backdrop.

For a slightly longer early reader (four chapters in this one), there is Laurel Snyder’s Charlie & Mouse, illustrated by Emily Hughes and coming to shelves in mid-April. It’s a set of stories that takes us through one day with two brothers, and the book stands out with its understated, unassuming humor and Hughes’ expressive illustrations.

Charlie and Mouse are eager to attend the neighborhood party, the subject of the first two chapters. On their way there with their parents, they gather friends, mostly in duos, to join them on their trek. Refreshingly, as they march to what readers expect will be a neighborhood gathering, Mouse wears a pink tutu and Charlie, a pink hat. Who says again that boys refuse to play dress-up and only wear blue? And in chapter three, they visit a gay couple (Mr. Erik and Mr. Michael), though not named as such, which is to say: yay, inclusion. It turns out that no one is at the playground when they arrive. Yet “it was the best party ever!” That’s right: those boys know how to make their own fun, and they essentially brought the “neighborhood party” along with them.

The next two chapters stand alone and are utterly endearing, the last one bringing the book full-circle. (It all begins and ends with bed lumps, but you’ll have to find your own copy of this one to see what I mean.) Both the author and illustrator capture the unique bond of these two young siblings, managing to make the story also speak universal truths about brotherhood. Bonus: there’s a chapter about selling rocks. Bonus number two: Mouse has some pretty great boots.

Patricia MacLachlan’s Barkus, illustrated by Marc Boutavant and coming to shelves in June, has even more chapters. There are five in this one. Whereas we have two furry creatures as friends in Pig & Goose and two humans in Charlie & Mouse, Barkus brings us a girl-dog duo. Barkus and this red-haired girl, Nicky, really hit it off, but the dog is really on loan from Nicky’s Uncle Everton, who shows up one day to say he can’t very well take his dog with him as he travels the world, which he’s about to do. The family is surprised (the parents looking a bit speechless), but Barkus quickly becomes a part of the family.

There’s a story where Barkus sneaks his way into Nicky’s school (the dream of many a kid); the story of a snow day and a dog party (not this one, I swear); a story where we meet Baby, a lost kitten who becomes a part of the family; and the story of a tent sleep-over with Nicky, Barkus, and Baby. This closing story shows the bond the girl has developed with her new pets and the comfort she gets from their presence and the friendships forged. This is the pulsing heart of the book, and it will delight, in particular, child readers who are fond of animals.

For another girl-dog duo and what appears to be a brand-new series, don’t miss King & Kayla, the new easy readers from Dori Hillestad Butler, illustrated by Nancy Meyers. King & Kayla and the Case of the Missing Dog Treats is already on shelves, as well as King & Kayla and the Case of the Secret Code. These are the easy readers you give to mystery fans – or at least those readers you sense may be budding mystery fans. As you can tell from the titles, there are some missing dog snacks to find and some secret codes to crack. There’s a lot of humor here too, particularly in that the books are told from the dog’s point of view. While he goes far in cracking the mysteries (dogs can sniff out trouble in more ways than one), his commentary is read only as barks by the humans around him, including Kayla. In the first book, for instance, Kayla and her friend write a list of things they know about the mystery they aim to solve, as well as what they don’t know. (This is a technique used in both books.) “There’s an intruder in the house,” says King’s thought bubble, while the girls ponder the problem. And he’s exactly right, as a cat has run into the house and taken the treats. Eventually, the humans figure it out, all the while King making commentary about the frustrated looks Kayla sometimes gives him. Dog-lovers will likely fall hard for this series.

Children ready to strike out on their own with beginning chapter books are in good hands with all of the above. No mystery about it.