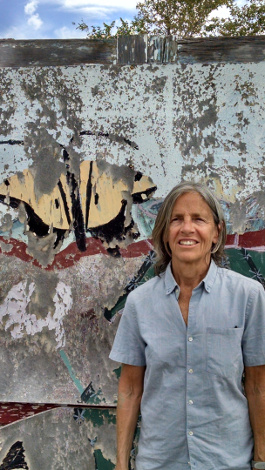 When one regards Eileen Myles and her prodigious body of work—an oeuvre consisting of more than 20 books of poetry and prose, most recently I Must Be Living Twice: New and Selected Poems 1975-2014 and a rereleased edition of the novel Chelsea Girls—what comes incontestably into view is that Myles is endowed with that rare gift coveted by all who take pen to paper: utter and unmistakable singularity. So it’s something of a wink to her reader when, parenthetically, Myles subtitles her most recent book, Afterglow, as “a dog memoir.” She knows she’s entering into a certain lineage with this book and she’s nodding to it, but one would be in error expecting Afterglow to resemble any of those books with which it shares some jacket copy DNA.

Because although it’s true that this is, indeed, a book interested in the connection between a human and a nonhuman animal—specifically, the bond shared for 16 years by Myles and her revered pit bull, Rosie—the ways in which Afterglow goes about trying to apprehend and capture that relationship are idiosyncratic, strange, and so beautifully apart from how such kinship is conventionally registered. With unflinching ingenuity and profound sincerity, Myles limns the delicate and often bewildering dynamics at work between an animal and her steward, never casting herself definitively as one or the other.

It doesn’t come as a surprise when Myles tells me there are nearly eight years of work built into Afterglow. “It’s trying to make sense of a profound relationship with

somebody who doesn’t speak the same language as you; a date with the miraculous,” she says. “How do you write that?” This fundamental difficulty is one that suffuses the text, and one that the book dramatizes rather than obscures as itmoves us through various modalities of narration and address: sometimes we have Eileen talking to or about Rosie; at other times we’re entirely in Rosie’s mind; and in still others we’re party to a kind of collaboration between the two—a duet of sorts.

“There is something in me that refuses to let go of that relationship, in part because I can’t get to the bottom of it,” Myles says. Myles brings to bear on a familiar lived experience—that of loving, growing alongside, and ultimately losing a companion—a sui generis system of language and methodology that gracefully holds the relationship and makes of it a space generous enough for a reader to share in, without ever siphoning the sanctity from it, without ever running roughshod over the precision of that unrepeatable intimacy.

Myles often refers to herself wittily in the book as Rosie’s “ghostwriter,” though she’s quick to remark that such cross-species co-authorship is meant more as a joke than anything else. “There’s too much puppetry in that for me to mean it,” she says. But it’s the comment she delivers so casually on the heels of this that felt, to me, to be a most succinct and stunning encapsulation—not only of Afterglow, but of the transfiguring relationship Afterglow endeavors to represent.

“Having a dog in my life necessitated my life’s expansion, and Rosie brought me someplace else,” Myles says. “How is that not writing?”

Vincent Scarpa is a recent graduate of the MFA program at the Michener Center for Writers.