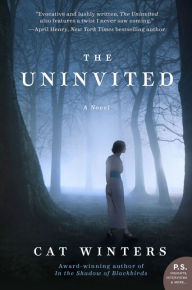 Grandma Letty paid another call to our house October 4, 1918. I saw her but a moment, standing in the yellow haze of twilight near the lace curtains of my bedroom, just an hour before my father and brother killed a man.

The women of the Rowan family have always seen ghosts—the uninvited ones—portents of coming death. Ivy Rowan sees the ghost of her Uncle Bert before receiving the news that her older brother Billy died in the Great War. Only a few days later, Grandma Letty appears in her bedroom just an hour before her father and younger brother killed a man—a German immigrant—in retaliation.

Ivy ups and leaves that same night: she will no longer be Wendy protecting her lost boys, standing between them and her father, for her brothers are now lost forever. Recovering from the flu herself, one of the lucky ones, she walks down the road to the town center where she becomes the first ever lodger at another woman’s house, a widow who lost her husband in the war.

But the guilt she carries on behalf of her family’s sins leads her to try and make amends with the dead German’s brother—a young man named Daniel, who carries his own demons and a scar across his neck. The two strike a fraught, complicated, unsettling relationship and become sudden, frantic lovers who find succour and a safe haven in each other’s arms.

The Uninvited is at once haunting and beautiful, a bittersweet, romantic tale that carries the author’s signature: a constant preoccupation with women’s stories. Here, at the height of World War I and the pandemic flu of 1918 that killed so many, the story concentrates on the ones left behind: the widows, the mothers, the nurses, the ambulance drivers. The women who must find work or perish; the women who have been doing work all along but who were never seen or heard; the women who will do anything to help others; the women who dare to be different and want more, want to go out dancing and celebrate life and to have sex and be free.

And there’s Ivy, a 25-year-old spinster who spent most of her life secluded, hoping to protect her bothers from her father’s violent temper. Who, finally musters the courage to leave and becomes utterly enthralled by her own sense of freedom. Who strikes a dangerous, dark, sexual relationship with a man she barely knows, considered an enemy of the country. Who is attracted to the sound of jazz playing across the world, at the club where all the unwanted go.

Who joins a group of female ambulance drivers to try and rescue the lives of the forgotten ones, the poor, the nonwhites and the immigrants. Because on top of telling the stories of women, this novel also focuses on portraying a small town in the clutches of ugly xenophobia and paranoia, panic and fear feeding into racism, making this novel not only incredibly poignant but also unfortunately topical.

The Uninvited is a feverish short novel that at first was disorienting for its sudden, unexpected turns, but became a welcome change of pace for me. The supernatural aspect is subtle and almost muted until it becomes more and more relevant in unexpected ways by the time the story reaches its beautiful conclusion.

The debut adult novel by Cat Winters, The Uninvited is an excellent ghost story: the type that is healing and moving rather than scary. Highly, highly recommended.