The End Isn’t Near, It’s Here 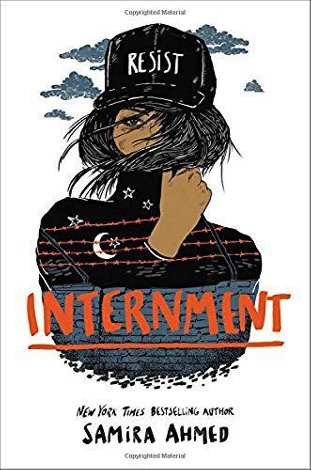 I love this cover: the illustrated image of Layla, a brown-skinned Muslim girl in a “RESIST” hat, is incredibly compelling in addition to being gorgeous. Go ahead and judge the book by its cover, because this one perfectly captures the spirit of the story.

Layla is a seventeen-year-old high school student living in the Worst Timeline. Picture the United States no more than six months in the future: Korematsu v. United States is once more considered good legal precedent. Muslims are being registered, rounded up, and sent to internment camps under the Exclusion Acts.

As the daughter of a now-fired university professor, she’s seen the writing on the wall—forced clapping at the President’s compulsorily-viewed speeches. A mandatory curfew. Neighbors spying on each other, ratting each other out to the authorities. A few months ago, life still seemed normal, and now she’s been branded a threat to American democracy, uprooted, and sent to a camp with a sadistic director.

Something has to be done: but what? And by whom? It will take far more than one strong-willed kid with a righteous sense of duty to stand up against this injustice, won’t it?

Being of an age where I could theoretically have teenagers of my own, Layla gave me a heart attack more than once. Her poor parents! Their daughter has the heart of a revolutionary, but you can hardly blame them for wanting to keep their heads down and stay alive, along with their only child. Meanwhile, their kid is taking incredibly rash (and necessary) actions to get the attention of the world, and her loud mouth is probably going to get her killed. It’s as terrifying as it is inspiring.

I loved Layla’s mental and emotional journey: it starts out in her microcosm, and slowly expands until she realizes the sheer scope of what she’s up against. And this young woman—who reminds me so much of the Parkland survivors—doesn’t collapse into despair, doesn’t helplessly stand by and think, “But what can I do?”

As you might imagine, this isn’t a romantic book, though love still tends to find a way in high-stress situations. Ahmed uses the small romantic element very effectively. Layla’s got a Jewish boyfriend, who attempts to do what he can to save her—and when he royally screws up, he learns from his mistakes and listens to her perspective as a Muslim girl. What could be swoonier and more important than that?

If you read The Handmaid’s Tale well before the 2016 election, do you remember that deeply unsettling feeling of, “This could actually happen. Sure, in a distant future, but it could happen?” Internment evokes that same “too close to home” feeling, except this time it’s not a distant future; it seems like it could happen tomorrow. The hyperrealistic contemporary setting and voice ring authentic, while guiding you through a dystopian nightmare that should hit close to home.

This is also maybe the single instance that I think that the more pop culture references there are in a book, the better. Usually I tend to err on the side of not dating your book too much, but this book is absolutely meant to be dated: it functions as a cultural artifact. In twenty years, when, I hope, the planet is still inhabitable and the horror is on its way to being repaired, this is the way to explain to future generations what it was like to live through this time. What we are so afraid of. What can’t be allowed to happen again, just like we swore it wouldn’t last time.

The single critique I have is that the pacing felt a bit fast near the end, but it didn’t detract from my enjoyment, or more importantly, the message. Overall, this was a stunning work that exemplifies exactly why I love kidlit so much: it’s revolutionary, empathetic, compassionate, and most importantly, gives modern teenagers the credit they deserve.

I’m a firm believer in learning history’s lessons so that we’re not doomed to repeat them, and I know I’m not the only one who has seen the frightening similarities between 1930s Germany and the rhetoric we’re hearing from white supremacists today. I know I’m not the only one who feels like Korematsu was not that long ago, and is bound to happen again: it’s just going to be (is) Muslims this time. There are internment camps for refugees, so how long will it be before they start rounding up American citizens? (At one point, a character rants that right-wing Christians are afraid of sharia law, when they’re oppressing others to push their own religious views in government: banning abortion, saying Christian prayer in schools, etc.)

Internment lays it all out: this is why we’re worried. This is what it looked like last time, and here’s what it could look like in the very near future. And here is the power of standing up for what you believe in when every bone in your body says “keep quiet and just survive.”

If you’ve heard the hype surrounding this book, believe it: Ahmed has written a powerful tale of what it means to be an American Muslim in a horrifying and chaotic time. I want to see this as required reading in high school, whether to promote empathy…or the radical notion that everyone’s voice matters.