Every Time I Speak, I Want the Truth to Come Out 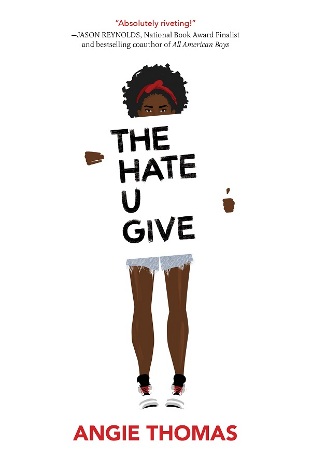 BOOK REPORT for The Hate U Give by Angie Thomas

Simple and perfect. Although I'll give it the benefit of the doubt that Starr is, indeed, in a pair of her trademark Jordans.

Starr Carter belongs to two worlds – her poor black neighborhood, and her mostly white prep school – with little overlap between the two halves of her life. That is, until Starr witnesses the fatal shooting of her childhood best friend by a police officer, which becomes the biggest controversy on the national stage. With tensions rising and misinformation spreading, Starr's the only person who can set the record straight about that night. Whether or not she does, though, could tear her community apart – and her life with it.

A girl after my own heart, Starr is a Harry Potter and Fresh Prince-loving sneakers aficionado with many a celebrity husband. Although it's a shame that she's always holding a part of herself back in order to navigate her two worlds – can't be too black in one, can't be too white in the other – because all of her is AMAZING. And having faced a lot of unfortunate tragedy (and resulting PTSD) in her short life, Starr's also made of mettle tougher than most. I couldn't be happier to share (her fave) Golden Oreos with such a kickass young woman.

After a year together, Starr and Chris have hit a rough patch. And that's without even addressing the elephant in the room of Chris being white and wealthy – which shouldn't matter, not really, but the differences are too real to ignore, and the stigma of interracial dating still persists in 20-freaking-17. (Lest this relationship sound too heavy, though, Starr and Chris are quite cute together.)

Talky Talk: A Star(r) Is Born

Being a kid in a candy store is probably the best analogy to describe the awe with which I marveled at the many topics that Angie Thomas seamlessly covered. (Code switching! Microaggressions! Friend breakups!) Funny, truthful, wise, relatable – and this is only her DEBUT, holy shizz. May this be the first of a long line of brilliant books!

This story of racial profiling and police brutality feels painfully familiar, accompanied by the rise of a Black Lives Matter movement in all but name only that advocates for police accountability. The book also emphasizes the clear distinction between protesters and rioters. (Everyone should read this book anyway, but maybe especially BLM detractors should give it a try.)

Loving and communicative, the Carters are total #familygoals. But it's every Carter for themselves once the NBA* playoffs roll around and the (good-natured) trash talk begins.

*I couldn't help being distracted that Starr's dad has the same name as LeBron's business manager.

Garden Heights' reputation might be marred by violence and crime, but there's another side to Starr's neighborhood, too: a close-knit community that cares about one another. A community that bands together in times of adversity. And a community worth fighting for, even when everybody's saying otherwise.

Spoiler alert: I got carried away with casting (mostly) Starr's family. I REGRET NOTHING.

They're already starring (SO CLEVER, I KNOW) in the actual adaptation, so why mess with great casting?

This is apparently super awkward since I've cast him with two of his exes, WHOOPS.

He's a little too old for the role, but he makes up for it by being absolutely adorbs.

This is a superficial pick only (he's too old and not an actor) since he has the cheekbones needed to play Common's son.

Kind of cheating since she plays an outrageous grandma on Black-ish, but she's just so dang good at it!

Cookie Lyon is mentioned in the acknowledgements, so I obvi had to include her in the cast somehow.

I knew I had it bad for this book when my digital copy was covered in highlights of all the lines that I wanted to savor. I hate why this book has to exist, but I shout-it-from-the-rooftops love that it does. I can't wait to see it thrive in the world and to introduce it to all my friends.

The Hate U Give is available on February 28th.