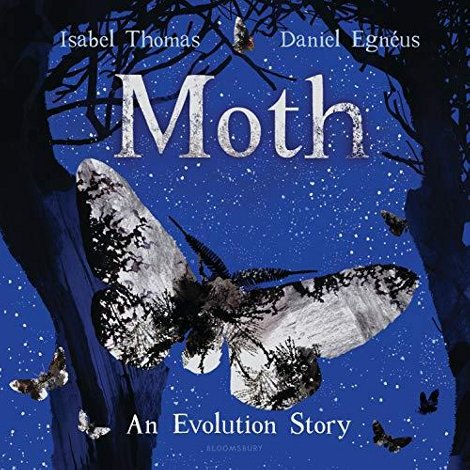 “This is a story of light and dark. Of change and adaptation, of survival and hope.”

Thus opens Isabel Thomas’s Moth: An Evolution Story, illustrated by Daniel Egnéus and on shelves later this month. This outstanding piece of nonfiction tells a tale, through the story of the peppered moth, of just what the opening lines promise you. It’s a story of evolution, natural selection, and adaptation—and the survival and hope that the author weaves in are just what child readers need in this day and age of global climate change and environmental degradation.

On the book’s first spread, we see a young reader in a large chair and holding a massive book about the peppered moth. This child frames the moth’s story, which begins with the insect’s exit from a shiny cocoon. This moth with “speckled, freckled wings” joins other moths who look similar, but occasionally a moth with “wings as dark as charcoal” can be spotted.

Naturally, predators seek the moths. But silently and without any movement, the moths sit on branches covered in lichen. “Who was the best hidden?” Thomas asks, settling into a past tense voice that hints at what’s to come. “Who would survive?” The darker-colored moths are history, snagged by birds for a snack, but the speckled moths “seemed to disappear.” The freckled moths had the best camouflage, the author explains, and they, in turn, produced offspring that passed on these salt and pepper wings.

In this way, Thomas expertly lays out National Selection 101 for young readers, accompanied by Egnéus’s exquisite multi-media illustrations, which play with light and shadow and texture and color in stirring ways. In one spread, we see moths still on a tree; nearby is a bird in flight, luminous in its array of colors yet menacing by nature. It hovers, as we pause to wonder which moth it will attack. In an earlier spread, we see the stunning display of a moth in front of a large full moon in the star-dotted night sky, its speckled wings a wondrous beauty. Just beneath it, a cat’s head looms. Egnéus knows how to compose a spread with drama and intrigue.

Things take a turn midway through the story to remind us that, not only do environments change, but our world is advancing at a rapid pace. Here, the Industrial Revolution appears (not called as such in the text itself but named this in the book’s backmatter). People build factories. People burn coal to “power magnificent machines.” The air fills with smoke and soot, and pollution stains those branches where peppered moths slept. If the world is darker now, Thomas asks readers, which moths will survive? Those speckled ones are doomed. As a result, those darker wing colors are passed on to the moths’ offspring, and—fifty years later—the freckled moths become rare. Now it’s Adaptation 101 for readers—told with economy and ease.

“But that’s not how the story ends,” Thomas adds. Shifting to a second-person voice, she asks readers to be silent and be still (a lot like moths on a lichen-covered tree) the next time they “scramble through a forest.” If you look closely at the trees, she suggests, you might see both kinds of moths. And that’s because:

“ . . . people decided to clean up the air. They burned less coal and found new ways to

power machines. Year by year by year cities grew greener. The air all around them became

cleaner. And the trees shed their sooty bark.”

There’s that hope Thomas promised us, Egnéus closing the story’s loop with the reappearance of the child who had been reading about peppered moths, walking through a shimmering blue forest. In the book’s backmatter, Thomas mentions mid-20th century laws that were created to reduce air pollution.

Thomas is a talented science writer for children and teens, having written more than 150 science books thus far in her career. She studied Human Sciences at Oxford; writes for the British children’s science magazine Whizz Pop Bang; and is a STEM ambassador where she makes her home in Cambridge, England. Egnéus, born in Sweden, has lived in several countries overseas and now, as I understand it, makes Greece his home. Earlier this year, readers saw his illustrations in Wendy Meddour’s moving Lubna and Pebble (the recipient of a starred Kirkus review). Egnéus, though hardly new to illustration (he has previously collaborated with Neil Gaiman on his American Gods quartet), is one to watch in picture books.

There’s so much to like here, but what both author and illustrator do most successfully is pull off a deft balance of the bad news (climate change, as mentioned in the book’s backmatter) and good news: Like the peppered moth, we are still evolving. And there is still hope.