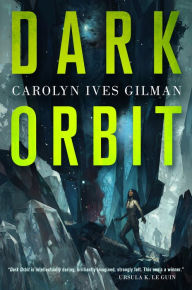 Dark Orbit by Carolyn Ives Gilman is a thought-provoking science-fiction novel, featuring one of the most striking premises I have ever had the pleasure of reading.

Many years ago, humans sent quest ships to find new habitable planets. No one has heard anything from those ships in a long, long time. Until now. News from a long lost quest ship have reached the centralized Twelve Planets, reporting on a habitable planet showing signs of reacting strangely to dark matter. A group of specialists Wasters from various disciplines is assembled to travel to the planet to investigate, including exoethnologist Sara Callicot. Sara is also given a secret mission on the side: to keep an eye on a crewmate that seems to be unstable. Thora, once a member of an elite, has fallen from grace after displaying prophetic non-scientific ideas that might have helped mobilising a revolt on another planet. Not that she remembers any of that since her memories have been wiped and rewritten.

Upon their arrival at the new planet, the team is faced with seemingly unsurmountable obstacles:  technology that displays signs of malfunction; the disappearance of a crew member and the murder of another; dark matter that seems to alter reality. And then they have First Contact with a new civilization no one even new was there.

With a narrative that alternates between Thora and Sara, Dark Orbit morphs and reshapes itself with every single new chapter:

A locked room murder mystery in space… which turns out to be something completely different than expected.

A fantastic look at “science” and the conceptualizing of what it means to be “scientific”…the book explores the idea that the brain is capable of things unknown and that those things might not necessarily fall under the commonly accepted idea of “scientific.” This is where Thora and the humans they found inhabiting the new planet find communion in how they explore and experience the outside world through intuition, emotion and empathy.

The examination of a team of disparate people from different cultures trapped in a closed environment...from stereotyping to biased extrapolation of cultural backgrounds, the relationships within the story develop and alter constantly throughout the novel to a point where nothing and no one is what they seem to start with.

The concept of Wasters…imagine this: travel across long distances is now possible through light-beam: the traveler is dissembled and reassembled on the other side but with a catch. For the traveler the journey takes seconds but the universe outside continues its journey through time, which means that depending on how far they travel, it is possible that decades might have passed. This is the case here, when the team arrives at the planet, 50 years will have passed from their point of origin. Sara, the main character, is a seasoned Waster, someone who effectively stands outside time:

For a Waster, time seemed like a mere convention—an arbitrary way of sorting events into a sequence, no more. Their lives consisted of fragments snatched from other people’s histories, separated by long gaps of travel. Over and over, they outlived all they knew. Their homes were torn down between visits, their siblings became their elders, they would meet and strike up friendships with the descendants of people they had known. At every stop, they plunged into new trends, new attitudes, new inventions. They saw governments change, companies rise and fail. Each time they leaped off into the void it was an exercise in faith—faith that the equipment would still be operating to receive them at the other end, that people would still remember, that people would be there at all.

Finally, we have First Contact, and all the ensuing anthropological, social, and political challenges it poses. When the team finds the people who inhabit the planet, they discover a new civilization that has a different way of interacting with the world. On the one hand, this is fantastic and superfascinating—they are all blind even though their eyes technically work. Because they live in a subterranean world without light, their brain has never learnt “vision,” to interpret and form those specific connections. Their culture therefore expanded and created their own means of interpreting the world outside, including language, touch, and other ways that do not require vision to function. Similarly, one of Sara’s jobs as the exoethnologist is to think of the ethical approaches to First Contact in regard to cultural preservation, and the narrative itself seems very self-aware of the dangers and pitfalls of First Contact situations.

As you can tell, there is a lot here to digest and although the novel sometimes falls short of seamlessly combining all the different threads, the stimulating ideas and fantastic characters are more than enough to make this a great read.