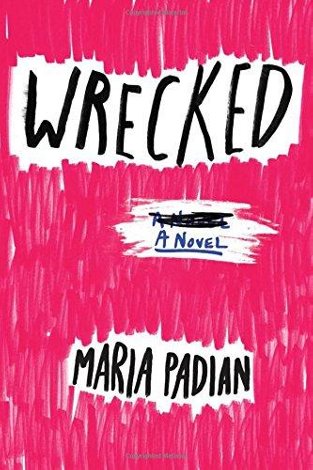 This she gets: that “first time” meeting with your parents. When they tell you they love you, but you no longer feel like the girl they thought you were or want you to be. The soccer star and perfect student, happy and “killing it” at college. Now past tense, and the new you reflected in their voices, in their eyes. Their disappointment and pain like gasoline poured on your personal pyre. It was hard for her, what must this be like for Jenny?

Seven weeks into her freshman year at MacCallum College, pre-med student Jenny James breaks her usual class-lab-library-sleep-repeat pattern and goes out to a party with a group of girls from her hall. Her roommate, Haley Dougherty—a star soccer player who’s recovering from her third concussion—wakes up the next morning to a clearly distraught Jenny, but is rebuffed when she asks what’s wrong.

Meanwhile, sophomore Richard Brandt skipped that same party in order to hang out—read: hook up with—his girlfriend, Carrie. The next morning, he and Carrie get into a huge fight, and she dumps him. When he gets home, his housemate Jordan mentions—well, brags about—having sex with a freshman girl at the party.

Wrecked is about sexual assault, and how one act of violence can ripple out and affect life after life after life. It’s about rape culture and sexism; about the process of making a formal accusation and the investigation that follows; about how making an accusation results in being forced to relive the assault again and again and again; about how making an accusation can result in mockery, disbelief, and threats. It’s about how, after already surviving a dehumanizing experience, making an accusation can turn a person into a hashtag, a symbol, a thing—to be used as a punchline or a rallying cry. And it’s about how a person can be used and hurt by the very same people who are trying to help.

It’s about women being seen and talked about as trophies; about sharing stories of sexual activity as social commodity. It’s about perspective and about the power of controlling the narrative; it’s about sifting through layers of statements and counter-statements, claims and counterclaims, to find the truth. It’s about wanting a situation to be over, but about how endings don’t always come with closure, and about the devastation that that realization can bring.

It’s about economic class and about the power and pressure that money can bring to bear; it’s about how some people don’t have to face the consequences of their crimes, or even acknowledge that they’ve committed a crime, period. It’s about how, as much as we try to fool ourselves into thinking otherwise, justice isn’t blind. It’s about college as the in-between time, about figuring out adulthood, about being forced to take the reins in terms of medical decisions and responsibilities and about forcibly taking the reins out of your parents’ hands.

We see a lot of books that deal with these issues—I’ve covered some of them here—and we’ll continue to see them until we see some significant cultural shifts. Here are a few of the reasons why Wrecked is a stand out:

The Structure: The majority of the book doesn’t focus on Jenny and Jordan, it focuses on Haley and Richard. Rather than seeing the story play out via the accuser and the accused, we get it through the filter and the perspective of two witnesses in alternating chapters. But, at the end of each chapter, we get brief snippets of the night in question as Jenny and Jordan experienced it. So, as we follow Haley and Richard in the present—as we see them get to know each other, clash, and eventually build a mutual trust and understanding—we’re also following Jenny and Jordan in the past, headed on a collision course to a very different destination.

She actually remembers the impact, unlike her two previous concussions, when she’d blacked out and had to be told afterward what had happened.

Haley tries to place this. It’s disorienting to hear someone describe something you did that you absolutely cannot recall.

Richard’s night, meanwhile, also parallels Jenny’s experience, but it shows alcohol as a factor in enthusiastically consensual sexual activity, rather than as a precursor to assault. There are a million other examples of parallels and mirroring between different characters and situations, and I have no doubt that more will become apparent with multiple reads. Even without the strength of the prose, the dialogue, the characterization, and the emotional and psychological nuance, it would be worth reading Wrecked purely to look at how Padian puts it all together.

The Characterization: With the exception of one secondary character, it is possible to identify with and understand every single person in this book at one point or another. Haley and Richard both have moments of decency and understanding, of kindness, of sudden clear-eyed realization… and they both have moments of supreme jackassery. Like, for example, Haley’s first reaction to Jenny’s trauma, which is self-centered and insensitive, or the moments in which Richard is the walking definition of casual privilege, when he understands that his words and behavior are hurtful, but doesn’t change course because it would just be too much work:

Words, which Richard batted carelessly among his friends, were powerful things to Carrie. With the guys, he slipped easily into some shorthand that didn’t mean much beyond what was just said in the moment, possibly less, since their word choices were reflexive, unconsidered. For Carrie, words were volatile, intentional, Molotov cocktails of meaning.

Deep down, Richard knows she’s got a point. He should respect accuracy in language. But choosing words carefully was one thing; navigating minefields of political correctness was another, far more exhausting, thing.

And in regards to the aforementioned secondary character: Even if he’s not immediately relatable, Brandon Exley is a character who will be immediately recognizable to most readers, because there are a lot of Exleys out there in the world—manipulative spider-in-their-web types with borderline sociopath tendencies.

The Empathy: These issues, for a lot of readers, are not nebulous things seen from a distance. They are immediate, experienced and witnessed day in and day out. We read about them and think about them and discuss them and live them. For those readers, Richard will be a difficult character, especially at the beginning. He was for me. At the beginning, I understood Carrie much more than I did him—I understood her impatience with his cluelessness, her frustration with his obtuseness, her anger at his lack of understanding.

But over the course of the book, there’s an arc of growth as he not only starts to understand, but starts actively trying to understand. Granted, a good amount of that is spurred by his personal issues with Exley—but even though it’s for self-involved reasons, the end result, his sudden understanding of the unfairness of it all, is the same.

Which isn’t all that dissimilar from people framing sexual assault as problematic because the victims are mothers, daughters, sisters. It’s frustrating and maddening that so many people can’t make the simple leap to Women Are People, but at the end of the day, even people who need to re-frame it in those terms are headed in the right direction. I mean, hopefully?