Facing Down Fears with Helen Oxenbury 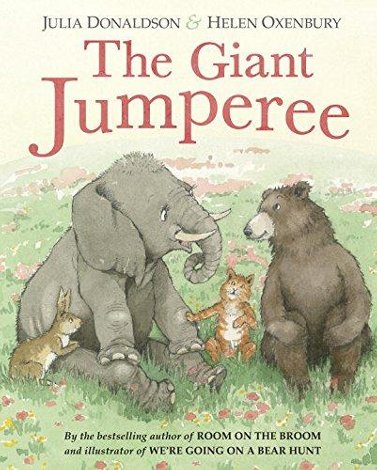 If you are a fan of the work of British illustrator Helen Oxenbury, now is a good time. “Helen Oxenbury has charmed generations of children with her award-winning illustrations,” says one. “Helen Oxenbury is among the most popular and critically acclaimed illustrators of all time,” says another. I refer to the jacket-flap bios of two brand-new Oxenbury-illustrated picture books on shelves now, Julia Donaldson’s The Giant Jumperee and Timothy Knapman’s Time Now to Dream. Both are the recipients of starred Kirkus reviews, and both—as some of the best of Oxenbury’s books do (as well as ones she has illustrated)—show characters deconstructing their fears.

Oxenbury has been illustrating children’s books for over 50 years, and nothing seems to be slowing her down. I always look with interest to her new releases, as my own children were raised on a steady diet of her books, and as a former school librarian, it was many a story time that featured her tales. At the 2015 Eric Carle Honors, at which Oxenbury was presented the Artist award, David Macaulay described her work as having a “deceptively simple looseness that turns a reader into a participant as well as a viewer.” (Oxenbury also said at the ceremony that she shall be back in another 50 years.)

Both of these new Oxenbury-illustrated books, geared at very young children, do precisely what Macaulay noted about her work – inviting in readers, particularly given that both feature engaging, well-crafted texts from the authors. Both feature children—or, in the case of Donaldson’s book, animals as child stand-ins—facing fright with moxie. And both showcase her signature, luminous watercolors. All in all, they’re solid additions to the Oxenbury canon.

Donaldson, also a beloved children’s book creator, doesn’t waste time in The Giant Jumperee: on the very first spread, Rabbit meets the book’s thorny problem. There is a scary, mysterious presence inside the burrow where he makes his home. He’s hopping home one day when he hears it: “I’m the GIANT JUMPEREE and I’m scary as can be!” He cries for help, and Cat appears, telling Rabbit not to worry. Cat plans to pounce on the cryptic creature, but after a valiant attempt, he is frightened too. “I’ll squash you like a flea!” is hurled at him from the darkness.

Things continue thusly: Bear and Elephant try to help, but they are scared off too, Elephant hugging a tree at the end of his efforts, just to steady his nerves. When Mama Frog shows up—hands literally on her frog hips, as if to say she will have none of this—it is revealed that the terrifying creature is none only than Baby Frog.

Donaldson expertly builds the tension in this well-paced story, which will have child readers on the edge of their seats. The creatures are classic Oxenbury, all rounded edges, fluffy (where applicable), and possessing big, expressive eyes that communicate abundant character. Children will identify with the mischief-making Baby Frog, and Oxenbury paints him as ebullient, thrilled to have caused some entertaining trouble in the day.

Timothy Knapman’s Time Now to Dream, released last year in the U.K., also features characters facing down fears, but this time they’re humans, named Jack and Alice. These two young children play in their yard when they hear nearby a plaintive, howling sort of gibberish. It comes from the forest, fitting for an Oxenbury book. (This isn’t the first time she’s taken readers into the deep, dark, and scary wilderness.)

Alice takes Jack in hand and encourages him to enter the forest with her, as she’s eager to see the source of the noise. “But what if it’s the Wicked Wolf?” asks Jack, who wants to head home. As they trudge further into the forest, Oxenbury progressively darkening her spreads and intensifying the mystery, the gibberish changes, yet remains indecipherable. “Everything is going to be all right,” Alice keeps telling her baby brother, who is still convinced they’re walking right into the trap of a Wicked Wolf. At one point, he tells her:

Alice’s response is that they “have to be brave,” a succinct and wise set of instructions for life itself, no matter one’s age.

Oxenbury plays with perspective in several spreads, showing readers at one point an aerial, squirrels’ view of the children. Beguiling are the dark, knotty, and menacing tree branches and shadowy forest landscapes of the children’s imaginations. The tension builds, as they get closer to what they assume is a Wicked Wolf. It’s a wolf alright, but it’s a “Mommy Wolf … singing her babies to sleep,” the children discover. In the end, it’s Jack telling Alice, after they witness the mother wolf singing to her children, that “everything is all right.” When they finally make it home and into bed, they “sailed off to sleep” on the same lullaby they heard the mother wolf sing, but Oxenbury paints Jack still awake, staring ahead, while his sister dozes. Was it all a dream, or did it really happen? It’s a delicious, dark mystery, and it has clearly marked Jack for life.

It’s always so good to re-enter Oxenbury’s worlds, and fans will be happy to do so in these two new books.