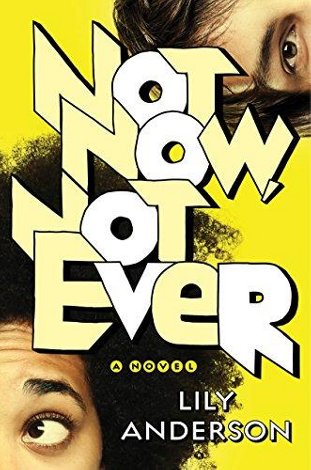 I don’t know if this has ever happened before: One week after listing all of the new releases I’m looking forward to reading this month, I’m ready to report back on the two that were at the top of my list! And I’ve got good—nay, GREAT—news!

Lily Anderson’s Not Now, Not Ever and Anna Priemaza’s Kat and Meg Conquer the World both entirely deliver on the potential of their descriptions. They are both an utter pleasure to read; both are smart and warm and funny; both feature the sort of storytelling that feels consistently friendly and light while also allowing the heroines to experience substantial emotional arcs and character growth.

Not Now, Not Ever, by Lily Anderson

The best retellings are the ones in which authors use classic stories as inspiration, but also allow themselves to diverge from the original—when retellings adhere too closely to the original, they tend to feel clunky and, of course, predictable. Happily, in this reimagining of The Importance of Being Earnest, Anderson does the former—and the result is a book that celebrates the genius and endless quotability of Wilde’s play while also telling a story that twists and turns and twists and turns and provides surprise after surprise after surprise.

AND it tells a compelling love story.

AND, in addition to the love story, it’s about family dynamics and the weight of familial expectations, about figuring out what you want in life and how that might clash with said expectations, about privilege and race and entitlement, about how different people respond to different forms of pressure.

AND it stars a heroine from a military family, which we don’t see very often in contemporary YA.

AND it features so many references to different SF stories that it will put SF geeks into a State of Bliss—I speak from experience—and it will give SF newbies a jumping-off point to join the fun.

AND it inspired me to re-watch the 2002 version of The Importance of Being Earnest, which was a very excellent life choice INDEED.

Kat and Meg Conquer the World, by Anna Priemaza

Kat and Meg, meanwhile, features a couple of romances, but is much more about female friendship. Priemaza creates two very different young women—Kat, a new-to-town introvert who struggles with powerful panic attacks, and Meg, a lived-here-forever extrovert who is secretly worried that her ADHD will eventually drive away everyone she has ever loved or even liked—and throws them together via one of my favorite tropes of all-time: the year-long group assignment.

Priemaza does a wonderful job of showing how Kat and Meg support, complement, and inspire growth and change and understanding in one another; she draws parallel after parallel between their experiences and situations without ever being too on-the-nose; she allows them to, again and again and again, choose to put their friendship first.

AND it involves a strong intergenerational connection between a girl and her grandfather.

AND it features the arc of a not-meant-to-be romance—one in which we see the writing on the wall before both participants begin to pull away—and she allows it to be something that hurts, something that involves not-great choices, but is also not the end of the world.

AND it touches on the collateral damage of the end of a romance—of how often, you don’t just lose the romance, but also the friends and family of the former partner.

AND it shows the evolution of a public-only text-based relationship moving to DMs to voice chat to communication via the postal service to an IRL meeting.

After reading these two back-to-back, I’m craving more—if you’ve got favorite contemporaries with the same light-but-substantial feel, let me know!