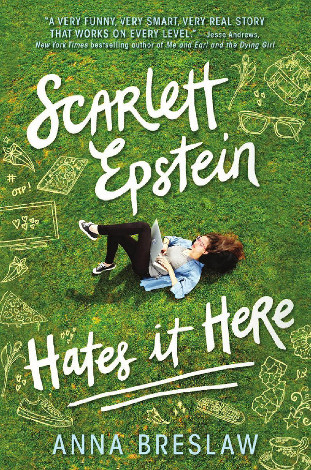 Although the girl lounging with her laptop on this cover could very well be doing actual work on the computer, the various doodles surrounding her—and the actual story between the covers—makes me think she’s probably goofing off on Tumblr or Archive of Our Own (a fanfic site).

Scarlett Epstein doesn’t really like to put forth effort. Although she’s quite intelligent, she has a solid 2.9 GPA. She’s not without friends, but she hangs out with the smart girls in school because they’re all equally awkward, and they’re willing to let her copy off their work. She’s never had a boyfriend, but that might be more because she often thinks the worst of boys her age, when in fact she just hadn’t given any of them a chance to prove themselves otherwise.

On the Internet, however, Scarlett shines. She’s a pretty well-known and respected fanfiction author, and a ride or die member of the Lycanthrope High fandom. When the show goes off the air, Scarlett isn’t quite sure what to do with herself. Until, that is, she begins a new fic, one that blurs the lines between real life and fiction, and one that has serious consequences, both online and off.

At first, I adored Scarlett. She seemed like a snarky, self-aware young woman with an amazing wit. She reminded me a little of me, in fact, particularly her obsession with pop culture, and a TV show—in this case, the very CW-ish/MTV-ish show Lycanthrope High—that other people think is ridiculous and terrible. But as the plot of Scarlett Epstein Hates it Here progressed, it became apparent that Scarlett’s sense of humor hid a lot of underlying issues, such as feelings of low self-worth and a belief that because she chose to be on the outside, she was above it all. By the end of the novel, she’s made some serious progression toward understanding both herself and her place in her own life, but she still has a ways to go.

Although Scarlett likes a certain someone in Scarlett Epstein Hates it Here, the actual moments of swoon between her object of infatuation and her are pretty lacking in any real feelings. I see possible good things for the two post-book, but it’s not until the very end that I got to that point.

Scarlett Epstein is one of the snarkiest protagonists I’ve ever had the pleasure of reading. Her way of seeing the world is seriously slanted, and it’s such fun to read. Anna Breslaw gave Scarlett a personality that absolutely leaps off the page. For example:

You know the kind of person who rolls his or her eyes at a TV show or book and goes, “That would never happen”? I’m the opposite: I walk around all day waiting for a reason to suspend my disbelief. There’s a ghost in the girls’ locker room? Great; let’s find out if she’s a murdered former prom queen out for revenge. The entire town of Melville, New Jersey, is directly over the Eighth Circle of Hell? Awesome. I shotty the crossbow.

Scarlett Epstein Hates it Here definitely feels like a story about actual teenagers, too. They drink, they squabble, they worry about their virginity and guys and school. The people who seem like they have everything going for them reveal that they don’t, and the people who think the world is out to get them realize that their lives are actually better than they ever realized.

Although Scarlett’s actual grandmother isn’t in Scarlett Epstein Hates it Here, her friend Ruth, an older woman who lives across the street, serves as a surrogate of sorts. And she’s amazing; she takes no BS, is willing to listen to Scarlett complain and then gives her advice without sugarcoating it, and smokes enough weed that she should probably have moved to Colorado.

Scarlett is heavy into the Lycanthrope High fandom, and spends a lot of her evening/night hours on fandom message boards, writing fanfiction, and chatting with other fans. As someone who’s done similar things over the years, I totally get where she’s coming from. And I truly appreciate that Breslaw wrote about her obsession without judgement; instead of being something that makes Scarlett stand out from the crowd or something she can be made fun of for, Breslaw posits it as a totally valid passion and hobby.

Although I’m not totally in love with the actions of your main character, Book, I did enjoy meeting someone as into, or more into, fandoms as I am. I’m now following your Tumblr—I’d love it if you followed back.