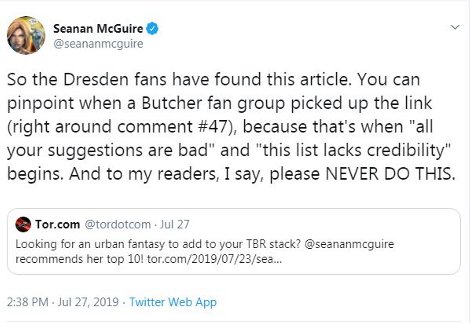 It looks like fans of Jim Butcher’s Dresden Files series are targeting author Seanan McGuire for having the audacity to leave Butcher’s much-beloved urban fantasy series out of an article McGuire authored on Tor.com about her Top Ten Urban Fantasy Books For Adults.

McGuire is not an urban fantasy newbie. She’s a prolific author who has written dozens of published novels, including the popular October Daye urban fantasy series. In her list, McGuire offers caveats about her list (and list-making in general), even expressing the desire to avoid genre feuds. Yet despite her prescient disclaimer, the comments on the article quickly devolve into insults because, well, the internet. Instead of saying “I really liked Butcher’s Dresden Files. Thanks for these other recommendations!” some rabid fans took to name-calling. One commenter claimed the list “lacked credibility” and was factually incorrect, though the article presented itself as a personal opinion piece.

McGuire posted an eye-opening Twitter thread that implores fans “NEVER DO THIS.”

McGuire doesn’t blame Butcher, of course; it’s not his fault people don’t know how to behave.