The Fantastic Adventures of Two Mercenaries 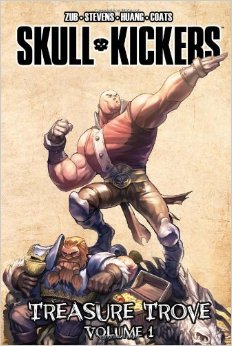 I’m gonna be honest. I picked up SkullKickers: Treasure Trove, Volume 1 before Pathfinder: Dark Waters Rising. But I read and reviewed the Pathfinder book first. I bring this up because the two books share a writer, Jim Zub. SkullKickers is almost a resume for Zub to be able to write the Pathfinder comic. As a stand-alone, SkullKickers is a fun homage to that dark corner of genre where sword and sorcery meets fantasy and gaming to become something irreverent and well worth your time, and mine. In fact, once I started reading it, I couldn’t put it down.

The book follows the adventures of two mercenaries. As near as I can tell, we never know their real names. We have a Dwarf (Shorty?) and a Human (Baldy?) working for hire. The story begins in the town of Mudwich where our heroes are dealing with an overweight werewolf and his cult of followers. A job for which they are not paid, nor are their efforts appreciated by the local constabulary. This distresses the Dwarf immensely, who is a bit of a hot head. Our Human has a cooler temper and keeps the peace, and his friend, from doing something rash and being sent to jail. On one such mission, the Dwarf kicks something in the skull and comes up with the idea of how they should be called “SkullKickers.”

When Chancellor Kenby arrives, everything changes. An assassin’s arrow kills the man as he is riding through the city on the main road, and a cry goes out offering a thousand opas to whoever brings the assassin in for justice. Stunned by such an offer, our mercenary heroes race and nearly capture the murderer—nearly. They fail. But another offer comes the following day when the Chancellor’s body is kept by the locals who are investigating whether or not the arrow was poisoned. The Chancellor’s entourage want the body back so they can properly bury him. The Dwarf makes a deal; 437 opas and he’ll get the body back for them.

This leads to a bigger mystery and bigger problems for the duo, including a necromancer and a demon.

From the first page, the humor, snark, action and adventure in this book hooked me. The very first line, in fact: “Yeesh! Whoever heard of a fat werewolf?” The story moves along at a crisp pace. The characters are archetypal and way, way over the top, but it works.

Beyond our heroes, we have the local lieutenant who suffers through whatever the heroes bring to his door. The mysterious assassin, who is part of a larger group with an agenda all their own. Which brings me to the worldbuilding. It happens fast, but is very well done. We move out from Mudwich, learning there is a Capital, and ruins out in the countryside, and much more out beyond that. Magic is real here, and so is technology. The Human half of the duo carries a gun, the Dwarf a pair of axes. Pirates, faeries, monsters—you name it, and they are in this book.

Hands down my favorite moment, though, was the introduction of something called the “body language translator.” When our heroes are trying to sneak into the ancient ruins where guards could be around every corner, of course they can’t talk to each other. Instead, they communicate through body language, and we the readers get a translator. I couldn’t stop smiling when I encountered it.

The art is over the top, but expected for this kind of story. It’s also gorgeous and rich. One complaint I have is the demon’s word balloons, which are red on black and very difficult to read. My copy is a hardcover, which adds something to the whole thing that my collector soul cherishes. The volume encompasses the first 11 issues of the Image Comic, has a detailed and beautiful interior world map, sketches, notes and various other cool stuff.

Highly recommend this one.