A Fantasy Novel of Revolution and Gentrification 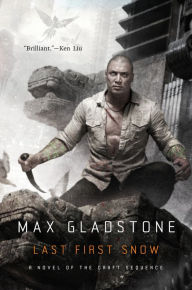 I recently binge-watched five seasons of The Good Wife on Netflix. It’s a great show with incredible female characters doing some awesome lawyering. When I realized Season 6 is not yet available I might have screeched. Thank the (mostly) dead gods of Dresediel Lex for Max Gladstone’s Last First Snow (which I read soon after finishing TGW), a fantasy novel in which corporate law is essential in saving the day and lawyer Elayne Kevarian is like Alicia Florrick on Red Bull, steroids and copious amounts of King in Red–approved coffee.

Taking place 40 years after the end of the God Wars (and some 20 years before the other books in the series), this book deals with a very specific moment in time in which powerful forces face each other with the power of “human” magic on one side—the Craft yielded by the King in Red—and the power of dying gods—as used by Temoc, the last of Eagle Knights of old—on the other. Lawyer Elayne Kevarian stands in the middle trying to bridge the differences between the two sides who are effectively playing a game of Monopoly where the prime property everybody wants is the Skittersill area within Dresediel Lex. Previously a poor district inhabited by slaves within the city, Skittersill is still bound by the wards of fallen gods even after being “liberated” by the Kind in Red. To replace those wards for new ones is essential for the “evolution” and “development” of the area.

But here is the thing: the King in Red, Temoc and Elayne might be the big cojones in this fight and they have big speeches and huge plans but the people they are trying to “save” are not amorphous, anonymous, voiceless pawns. For the people of Skittersill, this fight is a matter of life and death and they make their voices heard. They organize and protest. They fight, struggle, and die for their rights on a daily basis.

Excuse the liberal use of quote marks for words such as “save,” “liberate,” “evolution,” and “development,” but this is important here: this world, this series is so complex and human that the meaning of those terms vary depending on who is using them. There is no obvious right side or winning or losing side, and often, you find yourself being thoroughly convinced by one side or the other until you check yourself because of course human sacrifice is a bad thing and retaliation against people is wrong in spite of the stated intentions behind those. The only certainty is that history stops for no one and is always in flow.

There are many characters in the novel but the two main viewpoints are Temoc’s and Elayne’s. Temoc is someone caught right in the middle of change: he is torn about his alliances and about his identity as a warrior of the Gods and a family man in the middle of future-building. Because for Temoc, the future feels daunting because the past won’t let go. Temoc is not a new character to the series: his son is Caleb, the protagonist of Two Serpents Rise; the fact that those who’ve read the earlier book know where this story is going makes for an even more harrowing read of this new book.

Elayne Kevarian is a precious jewel. Her first appearance was in the first book of the series, Three Parts Dead, as a quick-ass, self-assured, superpowerful Craft lawyer, and in this book, we have a chance to see an earlier version of Elayne in the process of becoming that later version of herself.

In other words: Last First Snow is a novel of revolution via corporate law and gentrification in a fantastical setting with zombie dragons, Aztec-inspired resurrected gods, and walking, talking skeletons.

Last First Snow might be the latest novel published in the Craft Sequence but it is actually the first novel in terms of internal chronological order. It is a perfect entry point to a series that only keeps getting better and better.