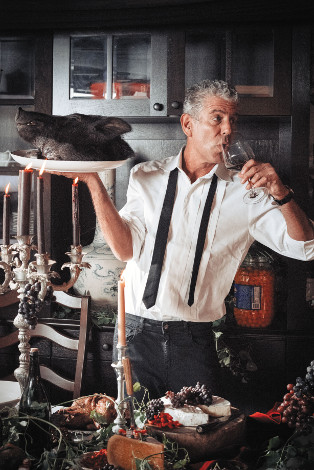 “We believe that innocent children should not be separated from their parents. We believe the ‘Zero Tolerance’ directive issued by Attorney General Jeff Sessions is cruel, immoral and outrageous. We believe the Department of Justice is engaging in practices that should be restricted to the pages of dystopian novels. We demand and expect better, and call on our readers to do the same.”—An official statement by “Kid Lit Says No Kids in Cages,” a campaign to oppose President Donald Trump’s family separation immigration policy, initially signed by 20 authors, including Rainbow Rowell, Ransom Riggs, and Melissa de la Cruz. In its first week, the campaign received an additional 4,000 author signatures and raised $170,000 for the legal defense of separated families (LA Times)

In memoriam, Anthony Bourdain, 1956-2018: “I’m sure you’ll be disappointed at how inelegant was my thought process back then. (Laughs) With Kitchen Confidential, I just didn’t give a shit at all what people might think. I didn’t think anyone was going to read it, so what did it matter. I just told the truth on every page. With every sentence. And I’m glad I did.”—from a 2016 interview with Biography.com. In the aftermath of his death by suicide, readers returned Bourdain’s breakout memoir, Kitchen Confidential (2000), to the top of the New York Times bestseller list.

“I think that the more you talk and write about violence the more goodness you can create in the world.”—Édouard Louis, author of History of Violence  (trans. Lorin Stein), in the New York Times

“It hurts to touch the inner life. Our best stories are not the ones that try to soothe that hurt, but ones that articulate that hurt and remind us that we’re not alone in that hurt. Apathy, like alienation, is a defensive response to thwarted desire. It’s people deciding—consciously or unconsciously—that they can no longer shoulder what Sarah Manguso calls ‘the burden of hope.’ ”—Steve Almond, author of Bad Stories: What the Hell Just Happened to Our Country, at The Millions

“Today I’m not interested in the mystique around publishing or writing—or making it seem unobtainable. Now I’m the person who seems to be having success, and some of the writers I was jealous of have run into trouble. It goes up and down. The worst thing to wish a writer is instant success—they never realize how much of it is luck.”—Rebecca Makkai, author of The Great Believers, in the Chicago Tribune

Megan Labrise is a staff writer and the co-host of the Kirkus podcast, Fully Booked. The photo of Édouard Louis is by John Foley; the photo of Rebecca Makkai is by Susan Aurinko.