Fighting Fear with a Lion's Help 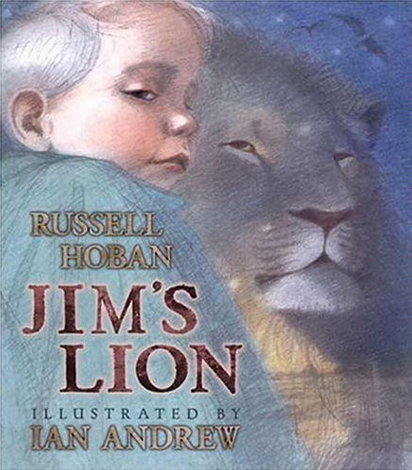 Back in 2001, the great Russell Hoban wrote a picture book called Jim’s Lion with velvety-soft illustrations from Ian Andrew. On shelves this week is a new edition of the book, re-imagined as a graphic novel with the artwork of talented British illustrator Alexis Deacon. I don’t know if we have the publisher, Candlewick Press, or the illustrator (or even someone else) to thank for the bold idea of transforming this into a graphic novel. This could have ended poorly, but it really works. I think, in fact, this is a story that was nearly begging to have new life in this way, with all respect to the work of Ian Andrew. Deacon takes the story in all-new, unsettling and beautiful directions.

In this tale, we meet a young boy named Jim watc

hing the snow fall from a hospital bed. Jim is seriously ill, as in his life is on the line—and he knows it. There’s a sense of great dread all around him. It’s difficult to pull off a story of childhood illness without being maudlin, but this one isn’t—in large part thanks to the dimensions Deacon’s artwork brings to the tale. For one thing, before the text even begins, Deacon brings readers a dream sequence in four spreads. In this, the illustrator doesn’t hold back: A lion enters the boy’s hospital room, dragging his bed from it. That’s followed by packs of animals, in clothing no less, who try to grab the boy. He falls to pieces, quite literally, and then finds himself on a stage. A giant magician rabbit and his assistants saw the boy in half.

Yep. He’s been told, after all, that he’ll be put on a table, put to sleep, and then the doctors will fix him. This would scare any kid, so these strangely surreal dreams or visions he’s having seem perfectly understandable. And it’s the ample room that a graphic novel gives to this boy’s interior life that is one of the most pleasing things about it.

The boy’s nurse, from Africa, tries to comfort the boy when he expresses concern over being put to sleep and perhaps not being able to find his way back. She tells him that “of course someone has to come looking for you.” After adding the caveat that this is “not kid stuff,” she explains that there’s an animal of his imagination that can “bring you back from wherever the doctors send you.” After instructing him in the way of finding a comforting place in his imagination (he chooses his favorite place by the sea), he meets a vicious lion in his mind’s eye. At one point, in one very simple and affecting illustration, we see the sharp teeth of the lion’s mouth, mere scribbles from the illustrator, as if we are the boy looking out from inside the lion—or, at the very least, the boy seeing the lion’s mouth up close. It’s a powerful moment.

The next morning, the nurse immediately tells the boy to keep his dream inside of him. (This strikes me, incidentally, as a really refreshing and lovely directive in this day and age of over-sharing via social media, but I digress.) “If it happened in your good place it might be a finding dream,” she tells him, “and if you talk about it something goes out of it.” When the boy asks if the nurse has her own “finder,” she tells him that she was near death multiple times in her life but that her finder came for her. “The real thing is always more than you’re ready for,” she says in reference to the finder creature and the fear one feels when meeting it. The nurse was always armed, however, with a don’t-run stone, and she reaches into her pocket to give one, a painted pebble, to Jim.

He is now armed with all the tools he needs to face his fears—and attempt to meet his “finder” again, the creature meant just for him. Thus begins a series of spreads in which he auditions various animals (some levity in this intense book). The surgery spreads, in which Jim delves deep into his psyche to fight enemies of all sorts with his finder, are arresting and spellbinding. A striking blood-red hue is a large part of the palette in these spreads; he is having surgery after all, though in his mind, he and his finder, the lion, battle the nightmarish anxieties that the boy harbors about his illness and the very real possibility of death he faces. In the end, it’s not only the lion who protects the boy, but I can’t very well ruin the book’s final act for you.