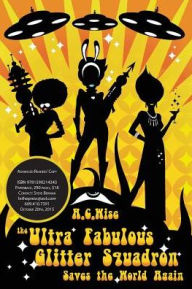 This is the ultra fabulous Glitter Squadron and they are about to save the world. Again. Not that most people would know.

Here is Bunny, their fearsome leader. You don’t want to fail her, not because of fear, but because of respect. She will save the world for you, and do that wearing stupendous high heels and her bunny ears.

Bunny is the Squadron’s main recruiter and the one who found Esmeralda, who has her back. There’s also Starlight-in-roller-blades; Ruby, who can strong-arm just about anybody, and her twin-not-twin, the glamorous Sapphire; Penny, who has seen War; CeCe, the drag King; and Madeleine, who can sing and fight. Then there is M, whose story no one really knows.

Together they fight and save the world over and over again. They also bowl on Thursdays.

The Ultra Fabulous Glitter Squadron Saves the World Again, a whimsical collection by A. C. Wise, assemblies the team with eight short stories, which feature some of the member’s origin stories as well as daily aspects of their lives. The latter varies between the mundane and the life-altering. The scope here is only part of what makes this collection so good; each story presents not only the individual member but also gives insight into the larger group in a really clever way. The opening act—“Operation: Annihilate Mars! (or, Doctor Blood and the Ultra-Fabulous Glitter Squadron”—introduces the team. Then each subsequent story builds up on that by going back and forth in time so when the last story rolls in and the Squadron is fully assembled, you know each character well, you understand the stakes and you get the conflicts and the way they are presented.

Out of the stories here I have two clear favorites: the first one, because of how it presents the team. And “Roller Girls Have More Fun,” which introduces the youngest team member, Starlight, and her struggles with family, life, and growing up as a trans woman. In addition, interspersed between chapters, there are small snippets called “From Sapphire's Little Book of Cocktails,” in which Sapphire makes up cocktail recipes for each team member. This is an absolutely fabulous addition to the collection because it adds a touch of epistolary narrative to the proceedings as well as giving extra insight into all characters from an outsider’s perspective. Sapphire is one of the few that doesn’t have a chapter exclusively from her point of view, but the author cleverly lets us know a lot about Sapphire in these small snippets. It is delightful.

What’s remarkable about the collection is the way it takes what could be mistakenly construed as superficial and gimmicky (oh, look, a superhero team that fights with superglamorous costumes and lots of glitter) and shows that 1) there is nothing wrong with saving the world wearing superglamorous costumes and lots of glitter thank you very much and 2) that in-depth stories can be told in a myriad of ways. Not to mention the fact that the stories are rich, diverse, and full of amazing women of all stripes.

This is The Ultra Fabulous Glitter Squadron and you should totally read their story.

In Book Smugglerish: an ultra-fabulous 8 out of 10