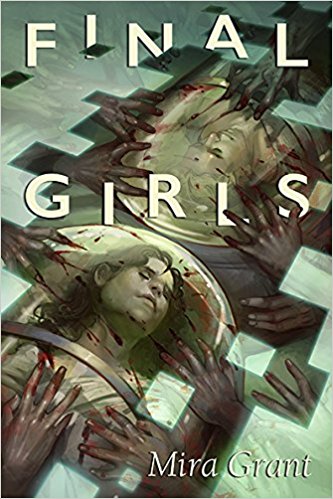 It’s somewhere in the future, and a smart someone has finally taken the natural step to use virtual reality to heal psychological wounds by running patients (clients) through specially developed (and controlled) scenarios that place patients in situational dangers in order to evoke emotions. Patients go under, closely monitored and with a specially concocted medical cocktail in their veins, and wake up in the virtual reality, not knowing it as such and usually as their much younger selves. For example two sisters who would like to develop a closer bond than they ever had: what better way to do that than to let them battle a creature out of nightmares to save each other?

That aforementioned someone is the ambitious scientist and impresario Dr. Jennifer Webb, who invented that highly sought after proprietary virtual reality and who is looking now for the one thing missing from her budding company: prestige. Status. Vindication.

What better person to provide that than Esther Hoffman, a journalist whose entire career has been predicated on debunking faux science? If Esther’s investigations turn out positive, there would be no stopping Dr. Webb.

Esther is not convinced there will be a positive outcome, and determined to reveal the truth behind Dr. Webb’s dangerous treatment, Esther accepts going through one scenario as a pre-teen, a point in one’s development where nothing really sticks (at least not like in teenage years). What she doesn’t know is that Dr Webb has planned to participate in her virtual scenario, becoming her virtual friend so that Esther will emerge with a bond she had never considered to have with the doctor.

But unbeknownst to them both, a third party has other ideas. And all of a sudden their little incursion becomes a matter of life and death.

A high concept with high stakes and a futurist setting meet in this new SF Horror novella by the always versatile Mira Grant (pen name of author Seanan McGuire). I’ve been trying to think of a good comparison to make, and I had originally thought: an episode of The Twilight Zone. But then a more apt comparison updated to our times is: an episode of Black Mirror. Just like this TV show, Final Girls takes a look at the possible horrors of mixing humans with technology.  The result, just like in Black Mirror, does not really provide a hopeful outlook, but what the novella does deliver is a great reading experience for psychological horror enthusiasts.

Uncomfortable questions are raised about psychology and its treatments, doctors, biases, and complications. Although, at times, the treatment comes across as incredibly simplistic in its approach to science and how the brain works, it is possible this is an intended read. Nevertheless, what truly stays longer is the sheer horror of this particular type of treatment gone wrong within the confines of the story as well as its bittersweet, emotional ending.