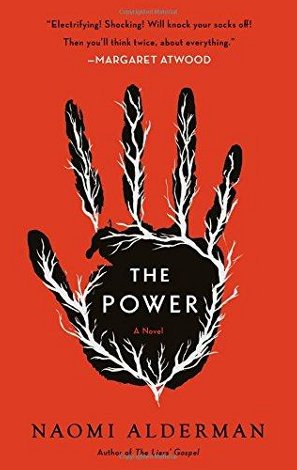 Readers looking for a good book need look no further than this month's picks for the best speculative fiction books. (Horror fans, stay tuned later this month for a larger roundup of spooky horror reads!) This month's collection of must-reads includes swashbuckling tales of sword and sorcery, an immortal crow who has lived many lives, a weird tale of the Old West and space pirates trapped by a rogue AI.

The Power by Naomi Alderman

In the speculative fiction tradition of asking "What if?", Alderman's powerful novel asks: What if women suddenly possessed a fierce new power? The power in question is the ability to send an electric charge through a single touch. This ability—first manifested in teenage girls who can also awaken the ability in older women—can range in effect from harmless static shock to lethal force. Fear spreads through society, resulting in discrimination, segregation, and even accusations of witchcraft. One thing is certain: it's the dawning of a new world.

The Stone in the Skull by Elizabeth Bear

Elizabeth Bear's Eternal Sky trilogy was well-received with good reason. Besides telling a whip-cracking good fantasy story, it excelled at believable world building that easily allowed readers to immerse themselves into the story. The Stone in the Skull is the start of a brand-new trilogy in the same rich setting as Eternal Sky. Here, readers get see to see the Lotus Kingdoms, the remains of a once-mighty empire where a brass automaton created by a long-dead wizard, along with a former bodyguard and a magic-wielding priest, carries a message that could lead to war.

The Tethered Mage by Melissa Caruso

In the fantasy world of Melissa Caruso's new fantasy series, magic is a scarce and much-sought-after resource. Those born with magical abilities are strictly controlled. As children, they are conscripted into the Falcon Army, fighting for the Raverran Empire. Zaira has avoided this fate, though. She's been surviving on the streets while keeping her mage-mark hidden. That is, until she unleashes her power out of anger. Now, Zaira must be watched closely and is tethered to Lady Amalia Cornaro, an heiress and scholar destined to be part of the empire's political machine.

Ka: Dar Oakley in the Ruin of Ymr by John Crowley

Crowley's latest fantasy novel is a magical realism story about Dar Oakley, a crow who was once a man. Born two thousand years ago, Dar went down to the human underworld as a young man and achieved and obtained immortality. He's lived through the times of Julius Caesar and the founding of America, and through his travels he has acquired unique insight that could change the very fabric of human existence.

The Book of Swords edited by Gardner Dozois

In this anthology, longtime editor Gardner Dozois gathers sixteen all-new epic fantasy stories to thrill readers. He also includes a fascinating introduction about the genre itself. Some of the included stories are set in already-established worlds, sure to prompt further exploration into the related novels; some are brand new fantasies filled with wonder. The volume contains stories by Elizabeth Bear, C. J. Cherryh, Kate Elliott, Robin Hobb, Ken Liu, Scott Lynch, George R.R. Martin, Lavie Tidhar and many others.

In this collection, Joe Hill serves up four short horror novels.  In "Snapshot," a Silicon Valley adolescent fears a Polaroid Instant Camera that erases memories.  In "Aloft," a man's very first parachute jump lands on a solid cloud. Deadly nail-like crystals fall from the sky in "Rain". And in "Loaded," a mall security guy becomes a hero when he stops a mass shooting, but begins to unravel when his life story unfolds.

Bloodprint, the start of a new fantasy quartet, introduces The Talisman, an oppressive regime led by a man known as the One-Eyed Preacher who is bent on world domination. The Talisman is a superstitious patriarchy that suppresses knowledge and subjugates women. As with every tyrant there is a resistance. The Companions of Hira is a diverse group of influential women whose power is derived from the magic inherent in the words of a sacred scripture. Their secret weapon is the Bloodprint, a dangerous text which the Talisman wants destroyed.

Above the Timberline by Gregory Manchess

Artist and illustrator Gregory Manchess merges art and prose in this tantalizing book which depicts a snow-covered Earth in an alternate future. Famed explorer Galen Singleton went searching for the fabled lost city, but his expedition was sabotaged. Now his son, Wes, sure that his father is alive, leaves the academy in search of him. Both the art and the story complement each other in this thrilling tale. Even after you've read the engrossing story, you'll come back for the fantastic eye candy.

The mashup world of Deadlands combines the weird west, alternate history and horror to surprisingly good effect. In Boneyard, the latest novel based on the Deadlands role-playing game, a traveling circus visits a remote Oregon community called The Clearing. Annie Pearl, the side show's keeper of oddities, will do anything to protect her mute young daughter, Adeline…even it means confronting the source of the mysterious disappearances that have inflicted the strange town.

The Book of Dust: La Belle Sauvage by Philip Pullman

Phillip Pullman had readers on the edge of their seats with his adventurous trilogy His Dark Materials. His new book, The Book of Dust, is the start of a new series set in the same imaginative world and features the return of the much-loved characters Lyra and her daemon Pantalaimon. The Book of Dustrevolves around one of the story's greatest mysteries: it will shed some more light on the workings of the magical "dust," the strange particle that is feared by many and discovered to be flowing out of the universe.

Orthogonal Procedures presents readers with an alternate 1970 that is a bizarre but intriguing blend of government-sponsored magic and science. After the Nazis were defeated in World War II, the Postal Bureau fostered a technological innovation explosion. Then, in the age of Sputnik and the Space Race, the long-simmering feud between the Shamans and Wizards of the administration comes to a boil and a bid is made for control of the government. It's up to G-man Fred Mackey to set America back on the proper bureaucratic track.

What are two young, enterprising engineers to do when the solar system has been ruined by interplanetary war and the ensuing economic collapse? If you're Adda or Iridian, the two desperate protagonists of Barbary Station, you hijack a colony ship and make a run for better times by joining a band of space pirates living the life of luxury in AI-controlled space stations. Except here's the thing: the AI has gone rogue and is killing the station's human residents and preventing them from leaving. If Adda and Iridian can outwit the AI, not only can they save themselves, but they will have earned a place as pirates.

Do you read short fiction? In addition to The Book of Swords and Strange Weather,noted above, you'll find plenty of other bite-size treats nestled away in the bookstore shelves this month. Grab any of the following and learn first-hand the power of short fiction:

¨  Tanith By Choice: The Best of Tanith Lee

¨  Star Wars: From a Certain Point of View