Finding the Good in Change 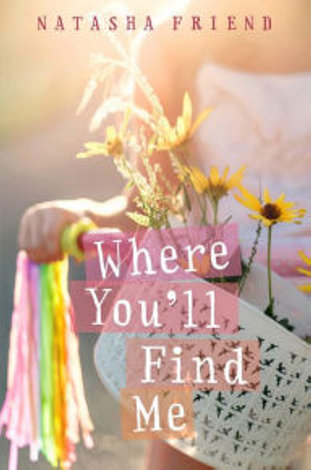 I used to think your friends were your friends no matter what, but that’s not how it works. There is elementary school, and then there is middle school, where suddenly all the rules change and no one tells you how to play and the only thing you know for sure is that you are losing. Everything about you is wrong: your hair, your personality, your jeans.

—Where You’ll Find Me, Natasha Friend

As first paragraphs go, this one’s a winner. It’ll resonate with a whole lot of readers, regardless of age—and I’m guessing that you’re one of them, yes?

Where You’ll Find Me is about Anna Collette, a thirteen-year-old who: has just been dumped by her life-long best friend; called 911 after walking in on her mother’s almost-successful suicide attempt; is now living with her father, her new stepmother, and their infant daughter.

Friend does an especially nice job of balancing her depictions of various friendships and relationships, in that she avoids easy stereotypes or tropes to tell Anna’s story. For instance: Anna’s best friend ditches her for the shiny popular crowd—and that shiny popular crowd includes a couple of classic Mean Girl types. But Anna also spends time with her stepmother and her stepmother’s sorority sisters—which, incidentally, might be the first positive depiction of a group of Woo Girls that I’ve ever seen in kidlit—and while they are also shiny and popular, they’re also comfortable with themselves and each other, smart and warm, caring and supportive. Even Dani, Anna’s ex-bestie, is portrayed with care—there is no question that she’s being a crap friend, but it’s clear that she is, at the very least, torn up about it.

That friendship—the end of it, Anna’s hurt and Dani’s guilt and frustration—parallels the relationship between Anna’s divorced parents, with Anna lining up with her mother and Dani lining up with Anna’s father. The reasons are different—Dani is grappling with peer pressure and diverging interests, while Anna’s father’s issues are more about an inability or unwillingness to empathize or work with/through his wife’s then-undiagnosed mental illness—but the mix of emotions is the same. And observing/experiencing all of it makes Anna realize that she’s left people behind, too, albeit in a less direct way:

“I loved third grade. Everyone was friends then.”

The way she says it, I know she’s including me in “everyone.” It’s kind of a naked comment, and I’m not sure how to respond.

All of this is to say: It’s a really lovely book. It’s quiet and smart, thoughtful and honest and empathetic. While it doesn’t deal with the same intersections of race and sexuality that Rebecca Stead’s Goodbye Stranger does, the focus on friendships—on how they morph, realign, and sometimes end—makes it a solid readalike.

Books Where You’ll Find Me made me want to revisit:

Along for the Ride, by Sarah Dessen: Another very young stepmother! As in Where You’ll Find Me, the protagonist originally dismisses her as a flake, and she is ultimately proven very, very wrong.

Saving Francesca, by Melina Marchetta: Another girl dealing with changing friendships and relationships while also struggling with her mother’s depression. I haven’t read this one in over a decade, it’s clearly time for a re-read.