Fishing for Understanding with Bao Phi 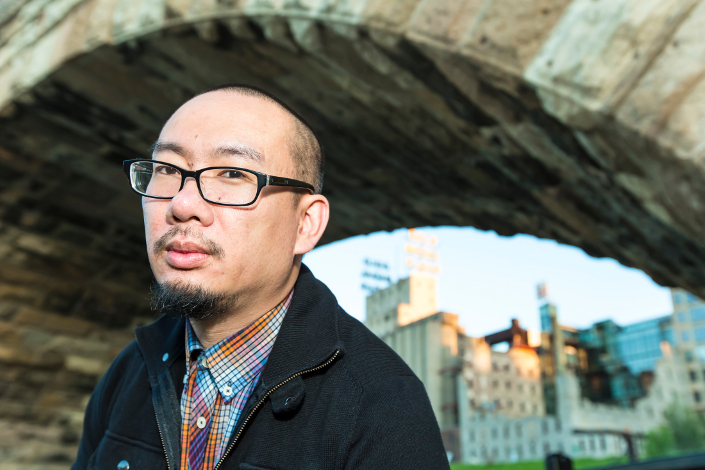 Minneapolis-based writer and poet Bao Phi, who has made his way in the world of poetry (he has a poem in 2006 Best American Poetry and is a National Poetry Slam finalist), sees his debut early next month in the world of children’s literature. A Different Pond, illustrated by Thi Bui, is an autobiographical picture book, a tender story striking in its honesty and its utter lack of sentimentality. It began life as a poem, which Bao tells me about below.

It’s a story of his boyhood in a poor, immigrant family in South Minneapolis. Closely-observed and nuanced, it tells of one early-morning fishing trip with Bao’s father, who was seeking food to provide the family. Bao fills the narrative with observant details and evocative figurative language. “A kid at my school said my dad’s English sounds like a thick, dirty river,” Bao writes. “But to me his English sounds like gentle rain.”

On the fishing trip in the dark, the young Bao watches his reticent father, considers his hard life, and even asks about his boyhood in Vietnam. The two catch a fish—“[My father] knows we will eat tonight,” writes Bao—and they head home.

It’s a beautiful and moving story, and I talked via email with Bao about how it all came to be.

Jules: Hi Bao! Thanks for chatting with me about this book. Can you tell the story of how this book came to be?

Bao: As a father, I've been intensely interested in finding diverse books to read to my daughter. At the same time, members of the lovely kids’ literature community really encouraged me to try writing a picture book and gave me some tips. I wrote out the script to A Different Pond, based on an unpublished poem, and tinkered with it for a little while.

Coincidentally, my daughter loved Patti Kim and Sonia Sánchez's Here I Am, and I was really moved by such a beautiful immigrant story that had a strong narrative but no words. I wrote a blog post about it for The Loft during the holiday season. And out of the blue, Krissy Mohn from Capstone wrote me a note, thanking me, and then asked me if I wrote children's literature. I showed them what I had, we had a couple of meetings, and then they bought it a few months later.

Jules: I teach children’s literature and always talk to my students about how picture book-writing is a lot like poetry-writing in that every word has such weight (given the page limit in picture books).

Jules:What was it like for you? How did the manuscript vary from the original poem?

Bao: It was similar, in that the language had to be precise and brief. But thinking of a younger audience, it varied greatly from the original poem. Mostly, what I kept from the poem was the idea. And some friends who are picture book writers, as well as Krissy at Capstone, provided a lot of help by advising me on edits.

What was new for me was when we started working with the illustrator, the immensely talented Thi Bui. There were some words and sentences that could be cut out entirely, because Thi would illustrate what I was describing and we wanted to cut down on redundancy. I'm so used to needing to use words to describe everything that it was a different, and terrific, experience for me.

Jules: She really does capture so much restrained emotion in the characters’ faces, particularly the boy and father. It must have been a powerful thing for you to see the artwork for the first time.

Bao: Thi did a terrific job. When I saw her illustrations, it really brought me back. I was in tears.

Jules: Since this is a biographical story of sorts, did you advise in any ways on the details of the illustrations or did she create them without any author notes?

Bao: It's funny. When we began the process, I just figured she would do her thing, and I wasn't going to get in her way. I'm a fan of her work, so I trust her. But she ended up asking me details from jump, so I sent some old family pictures and took a picture of the block with the bait shop we would go to and places that looked similar to the places we fished. A lot of Minneapolis has changed drastically, and there weren't digital cameras back in the day, so I don't have a lot of pictures.

Jules: I love the page where you talk about seeing (at the pond) a “Hmong man” and a “black man.” And that’s because I still sometimes hear parents bragging about how their child “doesn’t see color,” as if we can eradicate racism by telling children that everyone is the same. But children most definitely notice skin colors (not to mention, if they’re paying attention, the difference in how people are treated based on skin color, demographics, socioeconomic status, etc.)

My family fled as refugees from Vietnam to an urban, working class, poor, racially diverse neighborhood. We didn't all get along, far from it, and there was a lot of ignorance from everyone, including us. But it was pretty much impossible to not see color. And there was joy, too, and good times.

My daughter is now growing up in a similar environment, and there's a lot for her to process, to understand. As everyone knows, it's tough to be a parent.

Jules: In the book, I’m struck by how much is communicated in the moments (when fishing) where the father merely nods or smiles or looks away. So much is not said in words, but then there’s a lot of emotion under the surface there. And the boy senses it all. I love this too, because I think adults often forget that children catch all of that. Or, as Sendak once said, “children know everything.” You captured that well here.

Bao: Thank you! I think I learned that through osmosis, years and years of reading children's books at night to my daughter. As a kid, I loved picture books as well, but those days are so long ago that the memories are faint. But my daughter absorbs many things and has so many questions when we read books together.

Jules:I want to ask if your parents are still alive and have seen this book, but if that is way too personal a question, it's okay.

Bao: My parents still live in Phillips [in South Minneapolis]. I told them about it and gave them an advanced copy, as well as a cool print of some of Thi's art that Capstone made. I haven't asked them yet if they like it. I think I am still insecure, them being my parents and all. They haven't yelled at me about it, so I take that as a good sign.

Jules: In the book, the boy wonders "what the trees look like at that other pond, in the country my dad comes from." Have you been there since then?

Bao: I've been back to Vietnam twice – once on a study abroad program in 1996, and again with a grant from S.A.S.E.: The Write Place in 1998. It was a difficult, beautiful, and life-changing experience.

When I was very young, my father used to tell me about Ha Long Bay, people living inside hollowed-out mountains with lakes in the middle. I finally got to see Ha Long Bay when I was 21. We arrived on a foggy day, and most of my cohort were exhausted and wanted to wait to take a boat when it was sunnier. I was so excited that a few others and I rented a boat to take us out anyway.

The second time I went back, I went back with my mom. It was the first time she had been back since the war. It was a powerful experience.

Jules: What’s next for you?

Bao: My second book of poems was released last week, and A Different Pond comes out in a few weeks, so I'm working a lot on promo and touring. I'm trying to write every day. I don't make any assumptions, and I don't take anything for granted. I'm trying to create. We'll see what happens.