The Five Senses with Rachel Isadora 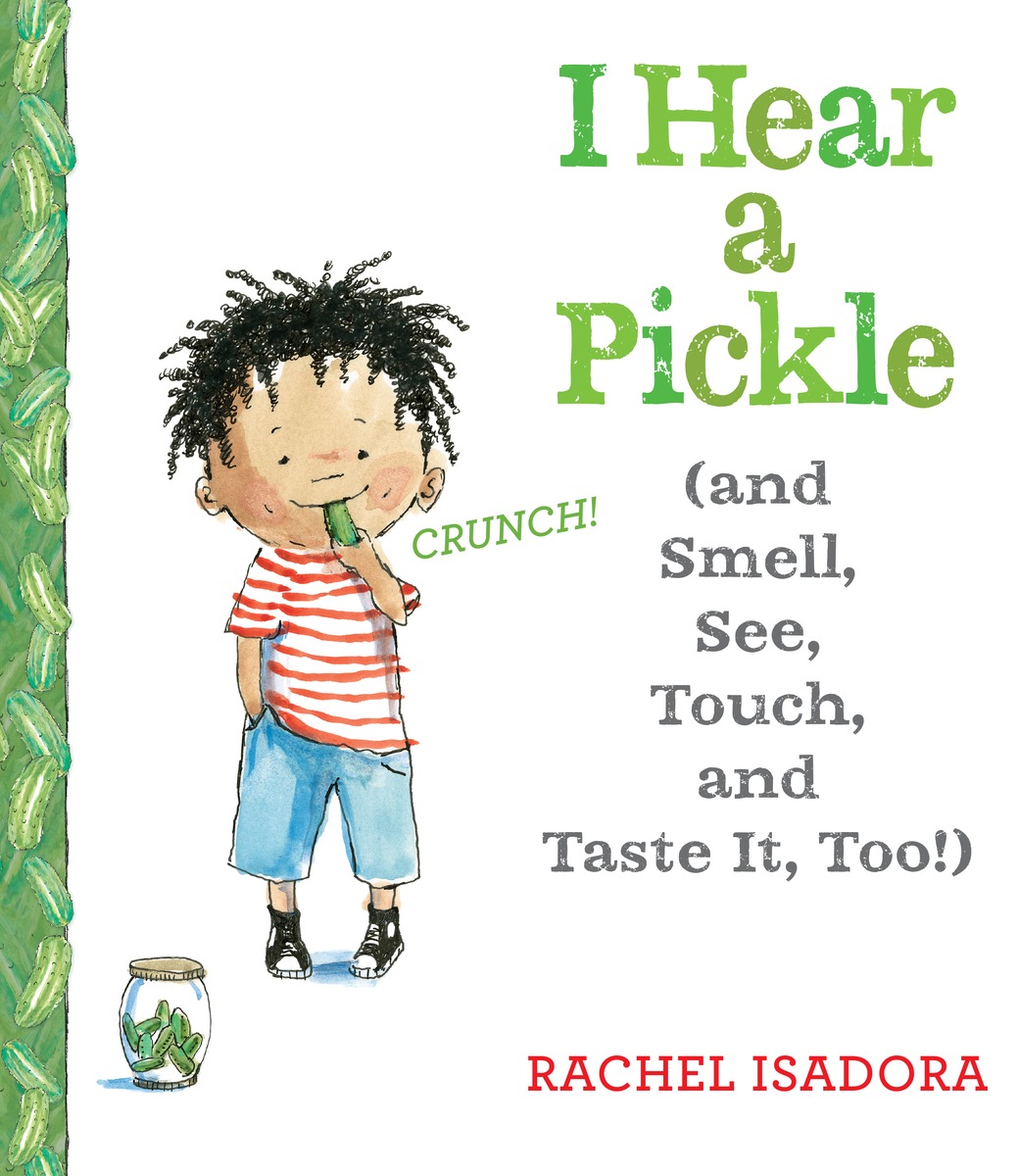 Rachel Isadora's delicious new picture book, I Hear a Pickle: (And Smell, See, Touch, and Taste It, Too!), sprung to life not from sitting down to put pen to paper and construct a story—but from drawing and list-making. "One day," she explains, "I sat down and started drawing pictures, even before writing words. I drew a child who smells her blankie, a child who smells pizza, and a child who has a cold and cannot smell. I tried to depict experiences that children could recognize while discovering the world around them. I didn't have drafts so much as lists dealing with each of the five senses."

It's from these drawings and lists that she chose the scenarios included in her appealing, toddler-magnet of a book, perfectly in tune with the sensibilities of young children and all about their sensory experiences. The book's simple and elegant design guides readers: On the top right of the recto page of each spread, readers see in black text: "My 5 Senses: I Hear, I Smell, I See, I Touch, I Taste." Each sense listed there, as it becomes the focus for a few spreads, is highlighted with a larger font size and different font color. The book also sports a larger trim size, perfect for one's sense of sight. And the warm, solid-green endpapers reference the book's ear-catching title.

The book features a whole host of children exploring the world around them, little vignettes laid out on uncluttered pages with ample white space. Children hear birds, smell burnt toast, see fireworks, touch the rain, and taste pretzels. Isadora mixes up her text with occasional commentary from the children: "I see the fireworks. Wow!" and “I smell the baby’s poop. Yuck!” And she grabs the attention of child readers with moments of funny negation as well: "I don't want to taste the spinach" (though eventually it becomes "I taste the spinach and like it!") or "I don't hear the worm." The final illustration showcases the simple pickle in all its glory, as the same child seen on the cover tastes, smells, sees, touches, and hears the pickle: "CRUNCH!"

The book includes children of all skin colors, yet this is nothing new for Isadora. She launched her career as an author-illustrator in the mid-1970s, and many of her books are about children of color—and were so well before the call for diverse characters became a necessarily loud one in children's literature in the past several years. Ben's Trumpet, for which she won a 1980 Caldecott Honor, is the story of an African-American boy who aspires to be a jazz musician.

Isadora applauds the recent focus on more representation in children's books and says it makes her particularly happy. "We live in a diverse world," she says, "and our reality should be reflected in what children see and read in books." Many of her previous books have been set in Africa, where she also lived for a time, and one of her next stories, all about a girl named Lala, will also take place there.

Isadora has taken pleasure in her career and feels as if her audience spans all ages. "I love telling stories," she says, "and I would say that writing and illustrating for children is not really different from writing or illustrating for adults. The plots might be more complicated, but the messages and connections with the reader are the same. That is why children and adults share joy when experiencing a book together. I don't think about creating a book for children when I'm working. Rather, I keep in mind the subject and try to show its truth. For instance, when I was depicting thunder in I Hear A Pickle, I didn't focus on the thunder, but a child's reaction to the sound. When I was young, I hid under my bed when thunder crashed in the night. Though I obviously don't hide under my bed today (only in spirit), I still remember how it felt way back when. In this way, I enjoy relating to not only children, but also to the children in all [of] us grown-ups." Though she acknowledges the importance of the adult reader in the picture book equation, she especially loves being around children and creating literature for them. “We get one another, and we click!” she adds.

It’s this shared experience between adult and child readers that has sustained and pleased her throughout her successful career. “Children's books have the power to open up the world for a child,” she says. “This hasn't changed and remains their most important contribution.”

I HEAR A PICKLE: (AND SMELL, SEE, TOUCH, AND TASTE IT, TOO!). Copyright © 2016 by Rachel Isadora. Illustration used by permission of the publisher, Nancy Paulsen Books/Penguin Random House, New York.