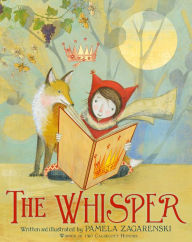 I’m a school librarian by training and sometimes can’t help but look at picture books in a utilitarian and curricular light. One aspect of instruction for which picture books can be useful is composition. Those who teach writing at the elementary level—also middle school and, yes, even high school levels—can use well-crafted picture books as writing prompts, particularly those books that are expressly about the imagination or creative process.

There are a handful of new picture books on shelves about this, either about the creative process in general or about writing and/or creating art. Rebecca Kai Dotlich’s One Day, The End.: Short, Very Short, Shorter-Than-Ever Stories (on shelves in early October), illustrated by Fred Koehler, is all about the adventures that occur between the—you guessed it—“one day” and “the end” of narratives. Nicola O’Byrne’s Use Your Imagination introduces readers to a wolf librarian who coaxes Rabbit into story-making, though he’s really more interested in having him as a meal. Alyssa Satin Capucilli’s Tulip and Rex Write a Story,illustrated by Sarah Massini, is—as the Kirkus review notes—a “good springboard for vocabulary-enrichment activities in and out of the classroom.” And the trippy The Wonder from debut British illustrator Faye Hanson is a tribute to imagination itself, as well as the adults in the lives of children who foster it.

Today I want to give a bit of air time to the best of the lot, Pamela Zagarenski’s The Whisper. Zagarenski has twice been awarded Caldecott Honors, but this is her debut as an author. (She both wrote and illustrated this book.) It’s the story of a girl, decked out in a red hooded sweater with catlike ears, who heads home one day from school with a “magical book of stories” her teacher loans her. As the girl rushes home excitedly, she is unaware that the words fly out of the book behind her—and that a tawny fox catches the drifting letters in a butterfly net.

She’s initially disappointed to discover that, even though the images in the book are curious and beautiful, there are no words to read. But then the book’s titular whisper, which comes to her unbidden on the wind, tells her that she can imagine the stories herself and provide her own narratives. Thus her literary adventures begin: On each spread, readers see a page of her book, as well as the beginning of each story that she, as the newly minted narrator, provides. We also see her on each spread, just below the illustration’s borders. She’s usually sitting cross-legged, fully engaged in the book in her lap. It’s as if we, as readers, see her on a stage, and yet what we see further is what occurs on the stage of her mind’s eye. Pretty flippin’ cool.

If you’re already a fan of Zagarenski’s elegant and offbeat illustrations, you’re in luck. This is classic Zagarenski: spreads full of texture and symbols, circles and wheels and crowns. Bees factor heavily in this book, and the fox, joined by a white rabbit, is on each spread—as if he’s slipped into each story. The spreads are detailed and vivid, and we read stories, the ones that spring from the girl’s mind with the art as her inspiration, with such titles as “Tiger’s Prayer,” “The Secret,” and “The Golden Key.” In “The Magical Cloak,” a mysterious man, some kind of magician or wizard, sails into a harbor and blows bubbles into the shapes of mammoth and breathtaking white whales. In “A Birthday Party,” guests arrive at exactly 3:33, enter with secret passwords, and bring scrumptious birthday cake at the orders of Pan himself, throwing a surprise party for an unknown friend.

That friend is unknown, because each story intro trails off with an ellipsis, making it an engaging prompt, should teachers want to use it, in creative writing classrooms—much like Chris Van Allsburg’s classic The Mysteries of Harris Burdick but without the occasional dread and horror. (To be clear, that occasional dread and horror is splendid. That’s one of the books that made me want to study children’s literature. Also: That Occasional Dread and Horror. Band name. I call it.) Zagarenski’s spreads are surreal and bewitching, and they will kick start the creative musings of any child who picks the book up to explore.

In the end, the girl helps the fox out with some grapes (Aesop, anyone?), and the final endpages wrap everything up with a very fitting and satisfying epilogue of sorts, which I will leave for you to discover. It’s the great ending to a satisfying book.

And a magical one—by any stretch of the imagination.