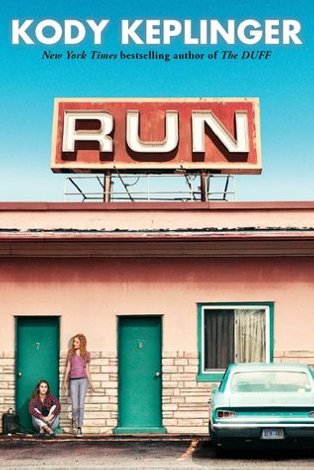 My legs were longer than Bo’s, and it wouldn’t be too hard to keep up if I could just push past my instincts, if I could just let myself run with her. I kept my legs moving, kept my fingers locked with Bo’s as we ran into the cornfield. I stumbled over the terrain, shocked by the brush of stalks against my bare legs. I focused on the rhythm of my feet slapping against the ground, trying to keep it and my breathing steady instead of thinking about the fact that I was literally running blind.

Stories about girls in small towns hit especially close to my heart, and I’ve been enjoying an embarrassment of riches lately, with If I Was Your Girl and Exit, Pursued by a Bear and Behold the Bones and now, with Run. It’s about the friendship between two girls who appear to have very little in common other than being white, loving classic country music, and living in the same Kentucky town—Agnes is known around town as a Good Girl, and Bo, the opposite—but who lift each other up, support each other, learn from each other, and love each other.

Run reads deceptively fast and deceptively easy, so here are just a few examples of why I am so entirely delighted with it: It’s a lovely depiction of friendship and of growing up, and in telling it through the voices of two girls who’re dealing with different forms of marginalization—Agnes is legally blind, and Bo is bisexual—Keplinger slaps down assumptions and prejudices and stereotypes right and left. And. And! Agnes and Bo’s voices ring entirely distinct and true, and in terms of plotting and arc and character, there are some really lovely parallels that deserve heaps of praise.

Bo isn’t out as bi, partly because she figures that as she’s already known as the ‘town slut,’ she’d rather not have biphobic people assuming that she’s ready to jump the bones of all the girls as well as all the guys. But when she outs herself to Agnes—their friendship is hugely and openly warm and loving, but entirely platonic—Agnes’ first reaction is to comment on Bo’s terrible taste in girls. Later, they have a calm and thoughtful conversation that reconciles Agnes’ faith—as well as what she’s been taught at church versus what she’s been taught at home—with sexuality, and basically reads like Keplinger is giving her readers a big hug, in a way that is still organic to the storyline and true to the characters.

Through Agnes, Keplinger provides everyday details about being blind—notebooks with extra bold lines, when canes are helpful and when they are not, the difference that lighting can make, reading text with a magnifier versus reading braille—and as in Bo’s chapters, she does it in a way that feels organic and true, and she does it in a way that makes it clear that this is Agnes’ experience, not a universal experience. And she directly addresses entrenched tropes and assumptions:

I always got the feeling that was why people thought of me as sweet and innocent. Because I was blind. In stories, the injured, the weak, they were always good. Kind and innocent. More than once, I’d heard the women at my church describe me as “an angel.” They’d tell Mama that God only sent angels like me to parents he knew could handle the challenge. I was a precious gift to be taken care of.

But I wasn’t an angel. I was just a kid who couldn’t see real well.

And as I said above, the parallels. There are parallels about extremes and needs/desires, in that Agnes craves independence because her parents are so overprotective, while Bo has had to fend for herself for so long that she craves a stable home life, to have the option of leaning on an adult. And that eventually, the girls have to become independent of each other, too. Finally, they alternate chapters, but are in different timelines: Bo’s story starts when the girls run off together, while Agnes’ starts just before they begin to become friends, and so ultimately, Agnes’ ends where Bo’s begins. It was such a satisfying circle that it made me cry.

Highly recommended, whether you’re a Loretta or a Tammy or a Patsy.