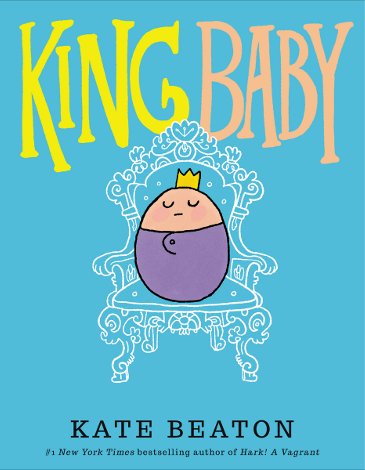 I wrote this time last year(ish) about the debut picture book from comics artist Kate Beaton. It was called The Princess and the Pony (I wrote about it here)—it was named a Kirkus Best Book of 2015, and my goodness, it was funny. (Well, it still is. If you go find a copy on bookstore or library shelves, you’ll see what I mean.)

Kate has another picture book, coming in mid-September, called King Baby. It’ll be out around the same time as another very funny book from another very funny lady—graphic novelist Vera Brosgol’s Leave Me Alone! (She is the creator of 2011’s Anya’s Ghost.) Let’s take a look at these two books today. I feel like celebrating the transition both of these women have made from comics/graphic novels to picture books, because both of these books are quite good.

Let’s start with Vera’s book. It is, as the publisher likes to say, an “epic tale about one grandmother, a giant sack of yarn, and her quest to finish her knitting.” The story launches in the way many traditional tales do, noting an old woman, who lives in a small village in a small house. She’s seated at her rocker, her balls of yarn nearby, with a slight smile on her face. But turn the page to see ALL THE CHILDREN—oh, they are everywhere—and her now-disgruntled face.

The old lady wants to knit for the coming winter months, but it’s just too loud. The kids wreak havoc, and the old lady is at the end of her rope – both metaphorically and literally, as we see at one point the tail end of a ball of yarn at her feet, making a beeline across the copious white space of a spread. So, she packs up her stuff (including her samovar) and heads out, yelling “Leave me alone!” She ends up in a forest with eager bears and then on a mountainside with curious goats, but she’s fearless and yells at each one of them to … you guessed it … leave her alone. Delightfully, she climbs onto the moon, and “little green moon-men” appear. She shouts at them, too, and then exits through a wormhole. It’s here on the other side of the wormhole that she discovers she can finally sit in silence—in utter blackness, mind you—and quietly knit. She’s found her peace and quiet. It was “PERFECT,” writes Brosgol. We all need a bit of alone time after all, even if eventually we long to see our family again – yes, even the rowdy families.

This surprising turn the book takes into outer space? I love it. One of the things I love about this picture book is Brosgol’s crisp, streamlined spreads: Everything on a spread serves it purpose. One illustration flows seamlessly into another with nothing out of place. These wormhole spreads, which are none more black (gotta use Spinal Tap references when you can in this world) and show the woman rendered in white lines, are super streamlined – and striking. And they are entertaining too: It’s a hoot to see the lady knitting, all alone, though the book possesses, as the Kirkus review notes, an understated humor. Finally, the old lady has that slight smile on her face again.

The book also has spot-on pacing, and I know from experience that it makes for a great read-aloud to young children. How they enjoy yelling “leave me alone!” right along with you and the grouchy old lady.

Now, back to Beaton and King Baby. Note the content ruler (the king baby of the title) on the book’s cover. Open the book to then see an angry despot on the jacket flap. “I am King Baby!” the story opens. Here we see a baby (yes, with a crown) swaddled and newly-born. King Baby has a line of subjects, old and young alike, ready to greet him; these are the doting family members and friends of the new parents. Everyone is thrilled, especially the mother and father. And all is well at first: It’s all smiles, kisses, laughs, coos, and gurgles. But King Baby also has certain demands, as babies are wont to have – feeding, changing, and burping, for instance. Here Beaton shows the baby having morphed from sweet and compliant to fussy and agitated – the hyperbolic dictatorial overtones are laugh-out-loud funny. Such is the life of a newborn after all. The poor parents are now thoroughly frazzled.

The house is now a wreck, baby fully in charge. In a series of spreads, the baby demands that the parents bring him the thing. You know, the thing, as communicated by screaming. When the baby realizes his clueless parents will continue to bring him the wrong thing, he decides to take matters into his own hands (and feet) and start to walk – so that he can get all the things himself.

This good-humored send-up of early parenting strikes just the right tone. At first, I worried this was yet another book for adults—namely, new parents—disguised as a children’s book. (There are many of these.) But, no. It’s child-friendly as all get-out. And preschool-aged children, in particular, having just said goodbye to the toddler years, will get hearty laughs from the tyrannical baby. They will love being one-up on the story, inherently understanding that this is merely child development in action. Perhaps the story will even generate a bit of sympathy from them for the poor, beleaguered parents.

Oh, and the story wraps up with a funny twist (which perhaps even hints at a sequel), but I won’t ruin that for you.

I hope these two women from the world of comics/graphic novels continue to make picture books. I’m just going to boldly assume they will, and I can’t wait to see what’s next.

Illustration from King Baby © 2016 by Kate Beaton. Used with permission from Arthur A. Levine Books/Scholastic.