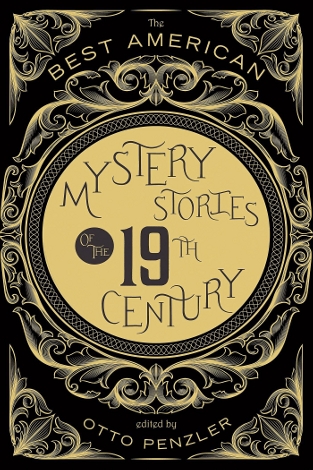 Here’s something I did not know before: Louisa May Alcott—yes, the New Englander who penned Little Women—was a crime writer. Sort of. As editor Otto Penzler explains in his latest short-fiction collection, The Best American Mystery Stories of the 19th Century, Alcott “wrote numerous thrillers and melodramatic novels and stories anonymously and pseudonymously as A.M. Barnard, and with such skill that her payments were substantially greater than those for the work she produced under her own name.” Included among Alcott’s sensational yarns was one titled “A Double Tragedy: An Actor’s Story,” which Penzler features in this new 600-page miscellany.

The account focuses around a fetching young stage actress named Clotilde (“the rage that season”), who has won the heart of a fellow thespian, Paul Lamar, but eschews his proposals of marriage, telling him only, “something that concerns me alone must be settled first.” As it turns out, that “something” is a troubled relationship from her past that has suddenly come back to haunt her, and that will eventually precipitate violence and Paul’s reconsideration of Clotilde as a suitable spouse. “A Double Tragedy” is rampant with dark portents and stagy, over-the-top dialogue, and even manages to squeeze in a scrap of swordplay between romantic rivals. Is it really a mystery, though? Only in the broadest sense, as it boasts startling plot turns and malicious intentions.

That same criticism might be leveled at other stories in these pages, as well. Yet remember, what we now think of as crime or mystery fiction didn’t begin to find a firm footing until deep into the Victorian Age, thanks in large measure to Arthur Conan Doyle and Sherlock Holmes; and it wasn’t until the 20th century that the genre took on a recognizable individuality and amassed a widespread following. What we’re offered in The Best American Mystery Stories of the 19th Century are 32 early, often excellent stabs at employing larceny, treachery and murder—and the investigation of such misdeeds—as principal catalysts for dramatic literary storytelling.

Penzler, a New York City bookseller, publisher and prolific anthologist (he’s also out this month with The Black Lizard Big Book of Locked-Room Mysteries), gathers within his treasury of 19th-century narratives efforts by famous and forgotten authors alike. Nathaniel Hawthorne earns a place in its contents with “Mr. Higginbotham’s Catastrophe,” a clever 1834 “riddle story” about an itinerant tobacco peddler whose fondness for gossip makes him a chump, then a champion. Edgar Allan Poe, who gave birth to the detective story more than four decades before Holmes’ debut, is represented here by not one, but two familiar “tales of ratiocination” starring his eccentric Paris sleuth, C. Auguste Dupin: “The Murders in the Rue Morgue” (1841) and “The Purloined Letter” (1845). We’re also served a double helping of Mark Twain, with 1883’s “A Thumb-print and What Came of It” (among the earliest stories to use fingerprints as a means to identify a killer) coming atop 1896’s parodic Tom Sawyer, Detective. Nick Carter, the once clean-living young master of disguise who took up a life of crime-solving back in 1886, courtesy of author John Russell Coryell—and has since appeared in more than 1,500 books by other writers—makes a visit here, in “The Detective’s Pretty Neighbor” (1899), which tells of a wife’s poisoning that brings unanticipated results. Showcased, too, are stories by Washington Irving (who provides a truly shocking opener with 1824’s “The Story of a Young Robber”), real-life private eye Allan Pinkerton, wordsmiths Stephen Crane and Jack London, and even future U.S. president Abraham Lincoln (whose 1846 study of allegedly murderous siblings, “Remarkable Case of Arrest for Murder,” claims all the elements of an engaging yarn, but a paucity of plotting verve).

However, it’s a few of the works here by lesser-known authors, and by others not commonly associated with the mystery genre, that deserve special mention.

In addition to being a crusading Gilded Age journalist and a royal pain in the caboose for the avaricious Central Pacific Railroad, Ambrose Bierce published fiction involving ghosts and battlefront clashes (the latter rooted in his own Civil War experiences), plus a smattering of narratives having to do with illegalities of varying severities—one of which, “My Favorite Murder” (1888), Penzler has added to this mix. It presents the imaginative and often comical defense mounted by a man on trial for a heinous homicide. Likewise likely to produce a grin or two is “Gallegher,” written by dashing, bumptious turn-of-the-last-century reporter Richard Harding Davis. Although “Gallegher” was originally rejected by several editors, that swiftly paced 1891 adventure about a sharp, eminently resourceful newspaper copy boy who’d learned everything he knew on city streets (“not a very good school in itself,” Davis contended, “but one that turns out very knowing scholars. And Gallegher had attended both morning and evening sessions.”) inspired a 12-episode series shown in the 1960s as part of Walt Disney's Wonderful World of Color.

I’d never before heard of New York theater critic and political writer William Leggett, but his contribution to this volume, “The Rifle” (1827), is particularly noteworthy. Penzler correctly describes it in his brief introduction as “an excellent suspense story that displays a very early use of an element frequently employed in modern mystery stories: the accusation, capture and imminent punishment of an innocent men for a murder he did not commit.” Satisfying as well is “The Sheriff’s Children” (1889), by Charles W. Chesnutt, who I knew to be a civil-rights activist of the early 20th century, but who’d previously produced a substantial number of short stories. “The Sheriff’s Children” concerns a black man being sought by a lynch mob, and the unexpected connection he has with the lawman so intent on saving his hide for a proper hanging later on.

Finally, the editor deserves acclaim for roping within this tome’s covers two other very different but rewarding tales by women. In “The Doctor, His Wife and the Clock” (1895), Anna Katharine Green, one of

America’s first female detective fictionists—best known for her 1878 novel, The Leavenworth Case—delivers another challenge to Leavenworth’s “colorless” Gotham policeman, Ebenezer Gryce. He is called upon in this 119-year-old whodunit to make sense of the slaying of a “highly respected citizen” and address questions surrounding the physician who resides next door…and claims to have committed this foul deed, even though he’s blind and his wife insists upon his innocence. And two decades before she won a Pulitzer Prize for The Age of Innocence, Edith Wharton showed a talent for concocting a story of high society and low embezzlement in “A Cup of Cold Water” (1899), which finds a desperate bank cashier unintentionally proving to himself that he is a better man than he’d suspected.

Because these yarns derive from the 19th century, they sometimes bear the odor of racism or sexism. Their writing styles can be stilted at times, and it’s unfortunate that so many of the authors highlighted did not continue working in this genre; unlike two previous Penzler co-edited anthologies that surveyed 20th-century fiction—The Best Mystery Stories of the Century and The Best American Noir of the Century—you cannot discover a wordsmith in these pages and be guaranteed of finding more of his or her crime fiction elsewhere. A compensation to all of that, though, may be that on occasion you’ll run across a wonderful word, one that’s fallen out of circulation over the last 100 years, and that bears writing down and reusing at your earliest convenience. I found myself doing just that many times; so don’t be surprised if in one of my future columns you stumble across “fulvous” or “feuilleton.” Look ’em up!