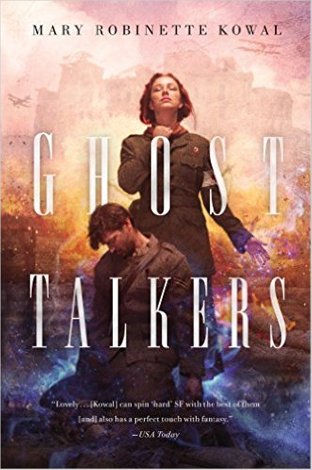 A novel of unsung voices and alternate World War I history, Ghost Talkers by Mary Robinette Kowal is a wonderful, fraught, and heart-wrenching read. Set against the backdrop of World War I, it reinvents history to allow unheard stories to be told, whilst at the same creating a marvellous piece of romantic speculative fiction.

Ginger Stuyvesant is an American heiress who serves the war effort as a medium working with the Spirit Corps. In this alternate version of our world, the soldiers who die have been trained to report back to a secret location where they can be debriefed by a medium circle set up by the Spirit Corps, passing on military intelligence details they were able to gather. After they give their report, the soldiers are then able to move on, whilst the mediums collect the information to pass forward to the intelligence officers. When the story opens, Ginger’s fiancé, Ben – an intelligence officer himself – is about to uncover a German plan to infiltrate the British army to find out the secrets behind setting up the Corps.

Then one fateful day Ginger’s circle receives a heart-breaking spirit – someone who not only carries an important message but who is not able to move on before settling a score.

What happens next is a well-paced story of love and loss, of military secrets and intrigue, a spy heist and a quest with innumerable obstacles to overcome as a heartbroken Ginger travels to the front to unmask a spy, whilst trying to maintain her connection to the living world.

Ghost Talkers is a story about war and, as such, it is a difficult story to read with all the loss that appears on its pages – Kowal does not mess around with the death toll here. But the losses never feel gratuitous or exploitative. Instead, the author explores the toll on the mediums who work day and night, and how their souls need to be tethered or else they can get lost too. There is a question about agency and recruitment of the willing that is thoughtfully navigated and remarked on, along with the implications for those who have died.

And then we have the unsung voices: the voices of those who we often don’t talk about when we remember WWI. The voices of women, people of colour, the disabled: the heroes in this novel. Ginger is a heroic, resourceful, determined, and complex character aware of her privileges (intersection feminism is a thing here), just like most of the characters—Helen, the person with the real power here is wonderful—in the novel are. The people in power dismiss them off-hand because of who they are, and the social injustices of the day are hard to read – reality often is and we oughtn’t to just brush them off.  The point here is that the reader is satisfyingly rewarded by the examination of those, by the strong implication of their wrongness and by having the unsung heroes becoming the ones to save the day.

This is a book where you will be fist-pumping during one scene in celebration then reaching out for tissues the next. I would read a thousand more of these stories set in this world.