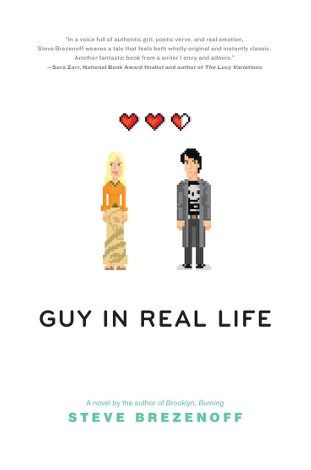 BOOK REPORT for Guy In Real Life by Steve Brezenoff

This artwork is the gamer version of Eleanor & Park, and I LOVE IT. The pixel figures of Lana and Lesh are spot on, from Lana's skirt to Lesh's trench coat, and even with the heart "lives" above them, this cover avoids being twee. Someone needs to sell a cross-stitch version of this on Etsy, because I need it on my wall like, yesterday.

When Lana (short for Svetlana) and Lesh first encounter each other, it's a meet-not-so-cute. Lana's bike collides with Lesh, stumbling home drunk from a metal show, and her most prized possession—a notebook full of Dungeon Master drawings—meets certain death in a large puddle. Even without this first impression, Lana and Lesh are unlikely to be friends. She's an eccentric hippie who sews dragons on her sweaters, and he's a metal-head loner two years her junior. But somehow, through a series of awkward lunches in the cafeteria, they gravitate toward each other, even as their separate worlds consistently pull them apart.

Let's be clear, I'm not a huge fan of hippies. But given the zero mentions of patchouli (thank god), I see Lana as less of a granola, hacky sack (no mentions of them, either) type and more of a free-spirited dork. I mean, the girl spends the majority of her free time either drawing terrifying beasts in her spiral notebooks or embroidering giant eyes on her long, heavy skirts. She's a crafty, creative badass, and by the time she hits age 25, she'll be the coolest chick in the Twin Cities. But right now, she's in high school, which means she's just a weirdo whose only friends are in the Gaming Club. I'm not really into D&D, but I would roll that 10-sided die (did I get that right?) in a heartbeat if it meant I could hang with a dynamic, utterly unique gal like Lana.

Lesh is officially one of my favorite YA male protagonists... but there is no way in hell we would be besties. I mean, he's a dude who wears trench coats and thrashes around in mosh pits. The only activity we have in common is eating. And while I can see why Lana would be drawn to him, I personally wasn't attracted to him. (Like I said, trench coat.) I did, however, really enjoy getting past his metal head surface and discovering the goodhearted guy underneath. He's still a teenage boy, which means he makes idiotic decisions, often with his dick, but he's also surprisingly sensitive and emotionally complex. And his adoration of Lana, not to mention his reverence for her, is pretty much the sweetest thing ever.

Jumping between the perspectives of Lana and Lesh gives the reader a double dose of their growing chemistry, which is both tantalizing and frustrating in its complications. For every headdesk moment I had (and there were many), I was rewarded with a charged glance or a secret smile, and I relished how naturally, and yes, even how slowly, their relationship evolved. For the purpose of avoiding spoilers, I'll keep it vague, but Brezenoff explores gender in a way that is unusual for YA, and the result is a thoughtful, nuanced portrayal of desire.

Talky Talk: He Said, She Said

As mentioned above, the chapters alternate between Lesh and Lana, and their voices feel distinct, although Lesh's is a bit stronger and more pronounced. Brezenoff has a talent for mixing raw authenticity with dark humor, and while I liked his first two books (reviews here and here) quite a bit, he reaches a whole new level of engagement with this third novel. The writing is at once earnest and cynical, flippant and compelling, and from the first page, I felt wholly immersed in the minds of these two achingly real and wonderfully flawed teenagers. In other words, if this book was an MMORPG, I would play it all the time.

Seriously, how freaking awesome is it that Lana is a Dungeon Master? Through her eyes, I really got a sense of how exciting D&D can be, not to mention the incredible imagination inherent in the game.

At the incessant urging of his friend Greg, Lesh dips his toes into the waters of an MMORPG, and soon he's almost completely immersed. I wasn't as intrigued by this game as I was by the D&D action, but it was still pretty cool to learn more about this phenomenon.

Smart, subversive and delicately layered, this book isn't afraid to let its geek flag fly, and I'm totally nerding out about it. But our connection isn't just based in some fantasy world—we click I.R.L. too, and nothing, not even orcs or powerful elves, can stop our relationship from reaching incredible heights.