Girl Friendship to the Grave and Beyond 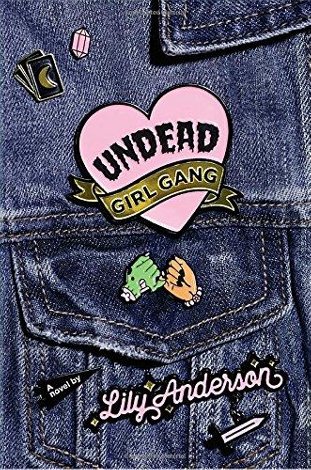 Each spell is more dramatic than the last, with ingredients lists longer than any I’ve ever seen before. I don’t know how many spells I read through before I get to the last one. Nothing else matters once I reach the page that says, The Seven-Day Breath of Life. In spidery handwriting, there’s an annotation next to the spell’s title in rust-colored ink. It says, Lazarus.

Problem is, no one believes her.

Well, that’s actually problem #3—Riley being dead is #1, of course, and having no one to sit with at the funeral is #2. (If you read between the lines, #2 is part of #1, because Riley was Mila’s only friend. And because, really, everything is part of #1.)

So when a grimoire shows up on the doorstep of the abandoned house that Mila and Riley used to practice Wicca in secret, Mila doesn’t really think twice about the implications of casting a resurrection spell. She just wants her friend back, if only for a few days—and she wants to find out who killed her.

Undead Girl Gang opens by challenging the hypocrisy so often exhibited at funerals—people publically and performatively mourning the death of a person they didn’t know, didn’t like, and in this case, tormented, in life—and it barrels on from there.

It’s funny and sad and angry and so honest about so many things; it looks at the different facets of grief and loss, like the isolation of grief and how grief often translates to fury. It’s about friendship and expectations and pressure and worry and change and identity; about reaching out and getting slapped down, about reaching out and getting helped up. It’s about the social dynamics of high school; it’s about generational differences in understanding… pretty much everything.

It deals with the practicalities of being resurrected, and while it deals with that topic hilariously, Anderson is never laughing at these girls—yes, even the mean ones—she’s laughing with them. Because, guess what and hooray, girls are also fans of body-related humor.

It’s insightful about religion being different things to different people. Here’s Riley on what Wicca did for her, and what she felt it did for Mila:

Religion is supposed to make you feel good. Make you less scared and more present. That’s all. Wicca made you less angry and me less lonely, and it pissed off our parents. That was enough for me. I didn’t need the spells to work. They never worked! Spells are just prayers with more steps and a name that scares people.

It’s so smart about friendship and trust, about how it’s so much harder when a person you love—and who you know loves you—doesn’t Get It. In this case, Mila is talking about Riley’s use of the word ‘curvy’ rather than Mila’s preferred descriptor, ‘fat’:

Her euphemisms are more hurtful than June’s actual insults.

She never passes up an opportunity to bag on the culture of her school:

Paper cuts are as common at Fairmont as racism and Adderall addictions.

She doesn’t pull punches even with people she loves and respects:

I can feel my bones bruising as the muscles in her forearm strain against the faded dream catcher tattoo she got at whatever point in the past appropriating cultures eternally onto your skin was the cool thing to do.

She has a clear-eyed view of her own cultural history:

“I’m a witch,” I say coldly. “Brujería was beaten out of my ancestors by Spanish missionaries a couple hundred years ago. There’s nothing but scared Catholics behind me.”

And, again, Undead Girl Gang is FUNNY. This is Mila’s description of her guidance counselor’s closet-sized-office:

All four walls are painted lavender. Directly across from me is a giant vinyl sticker that reads: Life isn’t about waiting for the storm to pass. It’s about learning to DANCE IN THE RAIN!

The font is very aggressive.

Plot-wise, there are some really great twists—all carefully constructed, so the reveals feel earned—and I love love love love LOVE that all of these paranormal shenanigans don’t go unnoticed in town.

So. Undead Girl Gang is smart, it’s funny, it’s original-while-also feeling comfortable, it’s tons of fun AND it has substance. It’s a lovely story about female friendship. More than any else, it’s the compassion that makes this book special—it shows a clear belief in peoples’ capacity for change and growth, and it feels somehow appropriate that one of its most emotionally impactful scenes is a celebration of life and love via joyous, dumb fun.

Highly, highly recommended for fans of of comedic fantasy by Rachel Hawkins and fans of darker-but-still-funny fantasy like Hold Me Closer, Necromancer and Anna Dressed in Blood.