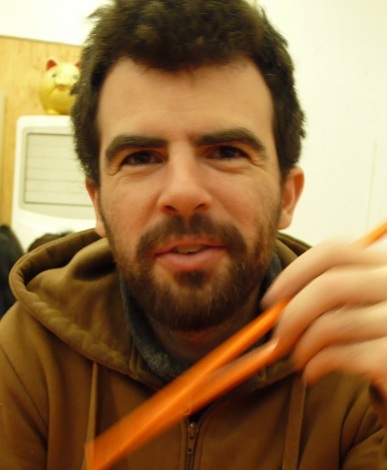 Young children are naturally curious about the lives of other children who live in far-off countries. Matt Lamothe’s This Is How We Do It: One Day in the Lives of Seven Kids from Around the World is a book that addresses just that. But it’s also a book reminding child readers that, while the everyday lives of people across the globe may have a whole host of differences, there are many similarities as well, many things that unite us.

In the book, readers meet seven children – Ribaldo in Peru; Romeo in Italy; Daphine in Uganda; Oleg in Russia; Kian in Iran; Ananya in India; and Kei in Japan. They may be illustrated here, but they are real children, living their lives in cities across the planet. We learn where they live, what they wear to school, what they eat for breakfast, how they learn, how they play, where they sleep, and much more. It’s a busy book, filled with information, making the final spread all the more striking. Here we see a night sky with a full moon on a full-bleed spread: “This is my night sky.” We all share the moon, after all, and the great Earth it looks upon.

For the book, Matt communicated with seven children all over the world---he explains how below---and gathered the details of their everyday lives. The result is a smart and engaging book; an excellent addition, in particular, to social studies and geography curricula. It is, as the Kirkus review notes, a “global introduction that goes beyond the usual symbols and sights.”

I talked to Matt via email about the book and how he went about gathering data for it.

Jules: Can you talk about how a trip to Uganda inspired this book?

Matt: I was on a trip to Uganda with a friend whose sister works as a primatologist in the forests there. This was my first trip to Africa, and I’d been primed by mass media to think that it would be dangerous and that people's lives would be unrelatable to my own.

But my experience was so different; I felt misinformed and uneducated. I was introduced to several Ugandans who worked as field assistants in the forest and was struck by how relatable and familiar they were. We spoke about our exploits in elementary school, fixing up houses, and mothers-in-law. We had many things in common, like getting in trouble for goofing off in class. And [we talked about] some experiences that were very foreign to me, like a teacher who'd had the "sleeping sickness," which caused her to fall asleep briefly and frequently throughout class. There were definitely differences between our lives, but mostly within a larger, more common framework.

Throughout the trip, I kept thinking about the most direct way to share this mixture of the familiar and unfamiliar with others. I felt a book for kids would be a great way to introduce this concept early in life.

Jules: Can you describe how you went about locating the families who shared their daily routines for this book -- and how you communicated with them and gathered info?

Matt: I wanted This Is How We Do It to include a range of children from different geographic regions, from both rural and urban settings, within a similar age range, and ideally of a median income for their country. I thought that seven children could show a broad range of cultures and locations from around the world, but it was a small enough number that children reading the book wouldn't get overwhelmed.

Finding kids with these specific requirements proved difficult. Through complex chains of friends of friends of friends and family and co-worker connections, I slowly established communication lines to the seven families in the book. It took about half a year to find everyone.

For each family, I made an "instruction packet" that had questions about the child's day, along with thumbnail illustrations and directions for taking photographs to document their home, clothes, family etc. For the families that needed one, I sent a camera as well. For both the Russian and Iranian families, we ended up translating the text. Almost all communication was done through email, although in Uganda we also used WhatsApp to text back and forth.

After waiting a few weeks (or months), it was really exciting to get back the responses and photos of each child's day. I then spent the following year poring over all of the imagery as references for the illustrations in the book.

Jules: I like your reasoning behind choosing real children around the world.

Matt: The choice to use real children, instead of made-up characters for the book, felt like a natural way to make the experience of a different culture authentic and relatable. I remember as a kid learning about other cultures in books, and a typical page would show "Pierre lives in Paris and loves to eat baguettes." The books were filled with cultural stereotypes that may have been true, but because the characters in the books weren't actual people, they were as real to me as characters in a fictional story — interesting, but still fiction.

By using real kids, not only does the reader learn about cultural specificity, but they also see that people are individuals within their culture and that they have their own unique day that may or may not line up with prevailing cultural expectations.

Jules: Why did you decide to put your own information about your everyday life on the jacket flap and not in the text?

Matt: Kids love to see what other kids do, and I think it has more of an impact on them if they see other countries through the eyes of their peers. If there had been an adult in the mix, it might have given them pause.

I included myself in the jacket flap so readers would know I was a real person, too, and that I also have a daily routine. The endpapers of the book include a world map that shows the location of all the children, and I added myself there as well, so readers could see that I was geographically from a different part of the world than the kids featured in the book.

Jules: What's next for you?

Matt: I've been working on a few ways of expanding This is How We Do It by creating lesson plans for a classroom that teachers can use and making an activity book that prompts children to document their own daily activities in the same way as the book's participants.

Aside from that, I'm trying to switch gears a bit and have been mulling over some fiction story ideas.

Jules: Thanks for chatting, Matt!

Above right image: THIS IS HOW WE DO IT: ONE DAY IN THE LIVES OF SEVEN KIDS FROM AROUND THE WORLD. Copyright © 2017 by Matt Lamothe. Illustration reproduced by permission of the publisher, Chronicle Books, San Francisco.