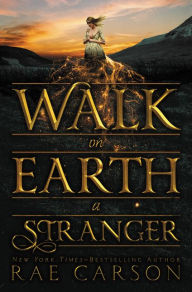 The hymn echoes in my head while I ready our wagon to leave. I’ve never felt so far from God’s grace. I suppose I am a stranger walking on earth, but I’m no son of God. I’m no son at all.

Sixteen-year-old Leah Westfall has grown up loving and beloved—life on a small mining claim in Georgia is hard, but she and her parents love each other more than enough to make the difficulties worth it. Compounding those difficulties is a shared secret that, on paper, should make their lives easier: Leah has a sense for gold, in that she can feel its presence, whether in the ground or on someone’s person. While that makes finding gold easier for her than for others, it makes explaining said finds nearly impossible—no one, after all, is that lucky, and making her power public knowledge would make her vulnerable to accusations of witchcraft…or worse.

Despite keeping her secret, worse comes to call. Her parents are murdered and their secret stash of gold dust is stolen. Coincidentally, her estranged uncle happens to be in town, and he claims her and the homestead as his own—and as a single underage girl, the law is on his side. Rather than ally herself with the man she believes to have murdered her parents, she hacks off her hair and heads west.

Although Leah’s gold-sensing talent is a factor, Walk on Earth a Stranger reads almost entirely like historical fiction—if I was forced to pick a one-genre description, I’d certainly go with Western over Fantasy. Carson knows her stuff, too, working in lots of the common wagon train archetypes—the Man Who Believes That Wealth Equals Knowledge; the Useless Preacher; the Sexist and Racist Buffalo-Murdering Marauder—but in a way that still allows them to read as believable.

Using those archetypes and forcing her main characters—Leah, who is white and grew up in a slave state, but who was raised to believe that slavery is immoral; and Jefferson, whose mother was a Cherokee, but who was raised by his Irish immigrant father—to interact with them for long periods of time in a somewhat claustrophobic environment allows Carson to showcase their reactions to a broad range of thoughts and perspectives and experiences, especially regarding racism, gender roles, slavery, and the treatment of Native Americans during the Westward Expansion. Leah, especially, has a great learning arc—she slowly comes to the realization that recognizing injustice is all well and good, but if you recognize it and don’t speak out about it, then you’re actually part of the problem, and complicit in allowing it to continue.

I don’t know if Carson got everything right—my knowledge about the Gold Rush era is mostly confined to historical fiction and, like, Deadwood—but her author’s note gave me some amount of confidence. In it, she talks in detail about choices she made in terms of timeline, language, and real-life historical figures, and she also thanks some of her early readers, which include a librarian from the American Indian Library Association as well as an equestrian.

It’s a story about finding and creating family, a story about living with and confronting prejudice (in other people as well as within ourselves), and a total page-turner of an adventure that also captures the endlessness of the wagon train experience. It ends on a not-quite cliffhanger, but with the very definite promise of much more to come—and I can’t wait for that “much more” to be in my hands and my eyeballs and my brain and my heart.