Graphic Novels for All Kinds of Young Readers 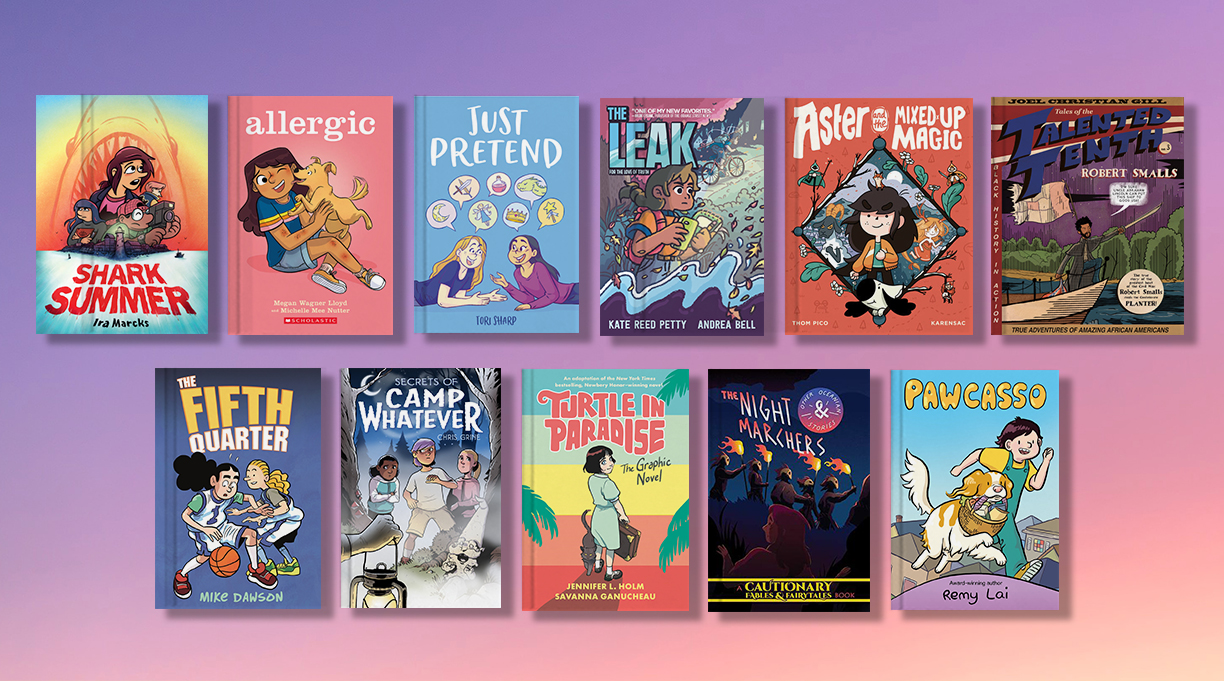 It’s no wonder that graphic novels are catnip to readers of all ages. By marrying art and text, these books become something far greater than their individual parts. Art can vividly and economically communicate more than paragraphs of text, and the shapes and layout of panels, the color palette chosen, and the illustrator’s style similarly contribute to the overall reading experience.

Middle-grade readers of graphic novels are in luck: Recent months have brought an abundance of offerings that cater to a broad range of interests. While more titles in translation would be most welcome, it is nevertheless heartening to see a greater range and number of primary characters—not just sidekicks—who get to appear in stories in which their identities, whether they are biracial or Deaf, are just part of who they are, not made into issues to be solved.Here are just a few new graphic novels to look for:

If you enjoy a bit of suspense, three great choices are Secrets of Camp Whatever, written and illustrated by Chris Grine (Oni Press, March 2), a delightfully spooky summer camp story; The Night Marchers and Other Oceanian Tales, edited by Kate Ashwin, Sloane Leong, and Kel McDonald (Iron Circus Comics, April 20), a collection of traditional stories from around the Pacific; and Shark Summer, written and illustrated by Ira Marcks (Little, Brown, May 11), a dramatic story about young filmmakers exploring an old mystery.

Animals are perennially popular subjects, and three new books feed young people’s passion for our furry, feathered, and scaled friends. The protagonist in Allergic by Megan Wagner Lloyd, illustrated by Michelle Mee Nutter (Graphix/Scholastic, March 2), will tug at the heartstrings of every child facing obstacles in getting a pet of their own. In Aster and the Mixed-Up Magic by Thom Pico and Karensac, translated by Anne Smith and Owen Smith, and illustrated by Karensac (Random House Graphic, March 2), the protagonist and her talking dog come across a flock of rebellious sheep, among other adventures. A lonely girl meets a clever dog in Pawcasso, written and illustrated by Remy Lai (Henry Holt, May 25), and through him finds a path—if somewhat fraught with emotional land mines—to friendship and belonging.

History lovers should check out Robert Smalls, written and illustrated by Joel Christian Gill (Chicago Review Press, May 3), and Turtle in Paradise by Jennifer L. Holm, illustrated by Savanna Ganucheau (Random House Graphic, June 29). The former, a great crossover read for teens and adults, is the latest in the Tales of the Talented Tenth series; it introduces readers to the heroic exploits of an enslaved man during the Civil War. The latter is a charming adaptation of Holm’s 2010 Newbery Honor title set during the Depression, which follows a girl making a fresh start after her mother sends her to live with relatives in Key West, Florida.

Graphic novels, with their emotional immediacy, are perfect for realistic fiction about navigating life and all its challenges. A young environmentalist eager to expose the truth about the pollution she finds in a local lake learns about journalism in The Leak by Kate Reed Petty, illustrated by Andrea Bell (First Second, March 16). Just Pretend (Little, Brown, May 18) is a memoir about author and illustrator Tori Sharp’s middle school years, which featured stressful turbulence in her family life as well as the comfort she discovered in creating stories about a fantasy world. Girls’ basketball forms the backdrop for The Fifth Quarter, written and illustrated by Mike Dawson (First Second, May 25), as well as being a catalyst for learning about risk-taking and looking past first impressions.